Want to watch Bill and Ted Face the Music online? If you’re traveling abroad, you can still live stream this film from anywhere. However, to do this, you’re going to need a Virtual Private Network (VPN).
Mark Gill TECH JOURNALIST, VPN AND PRIVACY SPECIALIST 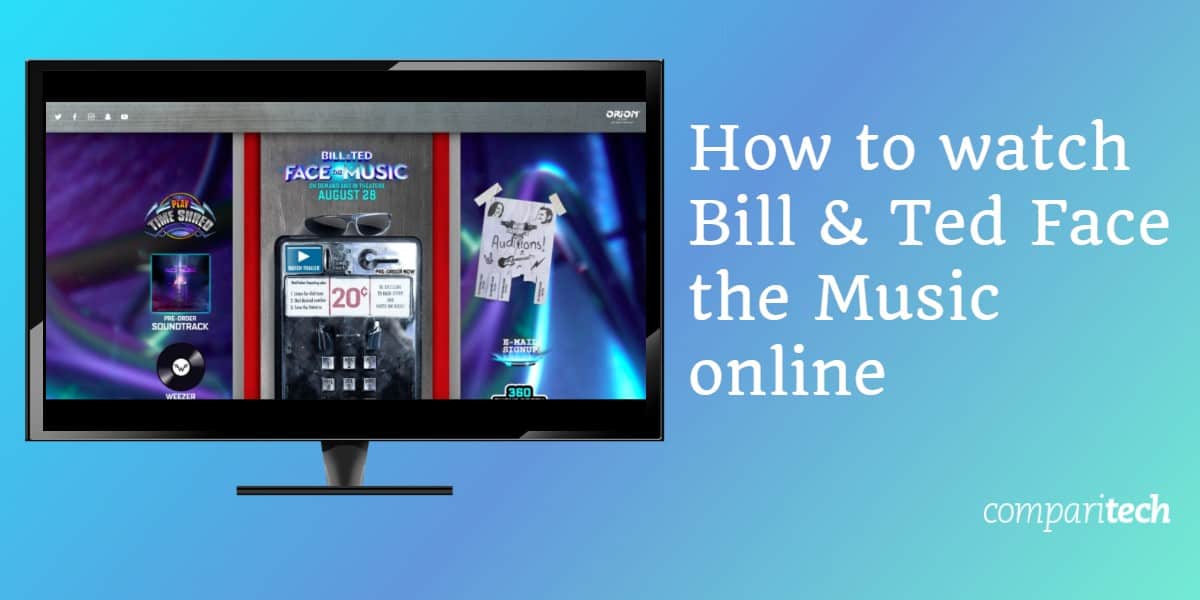 Bill & Ted Face the Music is scheduled to be simultaneously released in theatres and through video on demand (VOD) on Friday, August 28, 2020. The film’s release date has been delayed and moved up multiple times due to the COVID-19 pandemic. Copyright and licensing laws means the film won’t be available in some countries. As such, if you’re traveling outside of the US, you’ll likely need to connect to a VPN in order to watch Bill & Ted Face the Music online.

Please keep in mind that we’re only recommending official sources for watching Bill & Ted Face the Music. While there will be plenty of unlicensed streams, they’re best avoided for a few reasons. In particular, unauthorized sources may be taken offline for copyright infringement. You can also expect low resolution and a lag-filled stream. Fortunately, official sources are available so there’s no need to risk dodgy, unreliable streams.

The VOD release of Bill & Ted Face the Music will only be available on region-locked platforms. If you’re traveling abroad, you’ll need a VPN to watch via your usual home streaming services.

So how does a VPN work? When you connect to a VPN server, it routes your internet traffic through an encrypted tunnel. This secures your data, preventing it from falling into the wrong hands. Also, when you connect, you’re given a new, temporary IP address pointing to the country of the server you chose. For example, if you connect to a server in the United States, you receive a US IP address. This allows you to unblock geo-restricted content such as Bill & Ted Face the Music.

Here’s how you can stream Bill & Ted Face the Music abroad using a VPN:

Bill & Ted Face the Music is already available to pre-order in the US ahead of the cinema and VOD release on August 28. You can find it on Amazon Prime Video, Apple iTunes, Microsoft, and Vudu for $24.99 USD. Note that the film will initially only be available in the United States. In order to stream Bill & Ted Face the Music abroad, you’ll need to connect to a server in the US for a US IP address. ExpressVPN includes a 30-day money-back guarantee so you can try it out risk-free and request a full refund if you change your mind.

It’s worth knowing that, at the time of writing, there is no VOD release date for countries outside the US. However, Bill & Ted Face the Music will be coming to cinemas internationally. For example, it arrives on screens in Australia on Thursday, September 10 and in the UK on Wednesday, September 23.

What can we expect from Bill and Ted Face the Music?

Bill & Ted Face the Music is the third installment in the Bill & Ted film series and a sequel to 1991’s Bill & Ted’s Bogus Journey. Written by the original films’ writers Chris Matheson and Ed Solomon, the film is directed by Dean Parisot. Now two middle-aged dads, Bill and Ted are approached by a visitor from the future. They’re warned that they have 78 minutes to create a song that will save all life on earth as well as the entire universe.

Who are the cast of Bill and Ted Face the Music?