Looking to stream The Handmaid’s Tale season 5 for free online? In this article, we’ll explain how to stream this show with a Virtual Private Network (VPN).
Ian Garland Streaming, Kodi and VPN Expert 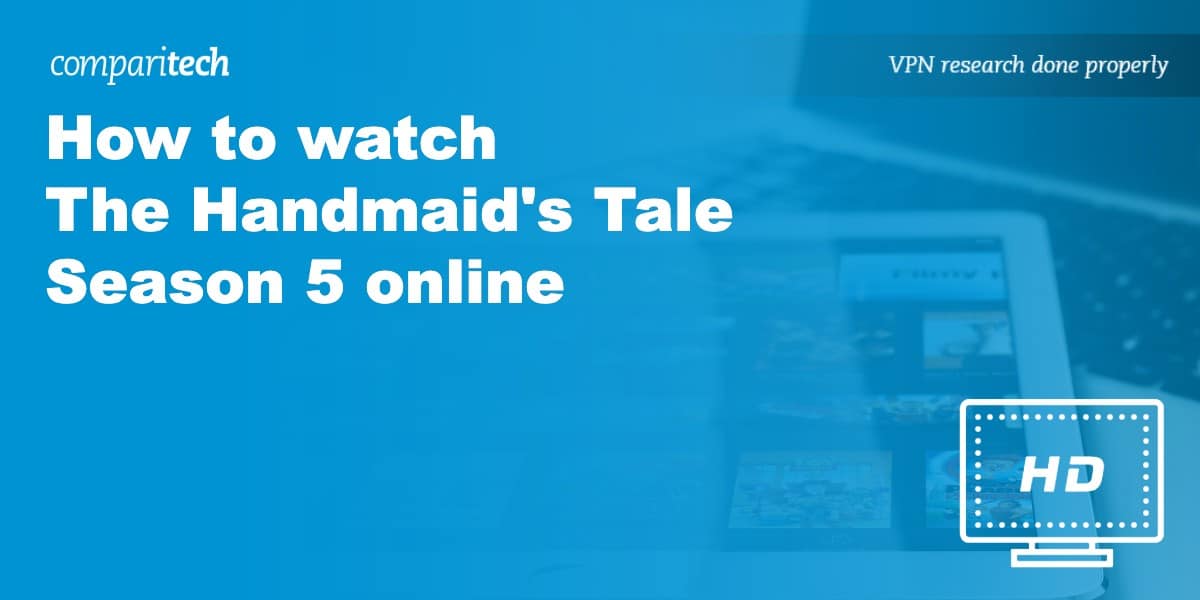 The Handmaid’s Tale season 5 is set to premiere on September 14 in the US, with a double episode. Hulu has confirmed that there will be 10 episodes in total, which means it’ll end on November 9, assuming no interruptions. Below, we’ll let you know when and where you can stream every episode, wherever you are in the world.

This post will only recommend official sources. Popular shows like The Handmaid’s Tale are often available on unlicensed streaming sites, but we strongly advise against using these.

Not only are third-party streaming sites illegal, but they are prone to take down and poor quality videos. With plenty of legitimate ways to watch season 5 available, there really is no reason to sacrifice quality by watching Handmaid’s Tale elsewhere.

You’ll need a VPN to watch The Handmaid’s Tale for free on your home services if you’re traveling outside Australia or the UK. In this article, we will explain how to use a VPN to get a valid UK IP or Australian IP address from anywhere in the world.

With the right VPN, bypassing regional restrictions and accessing geo-blocked services abroad is easy. Just follow the steps below.

Here’s how to watch The Handmaid’s Tale season 5 online from anywhere:

In some countries, The Handmaid’s Tale will be broadcast on live TV (shortly after each episode has aired on Hulu in the US). No matter whether you plan to watch it on Hulu or on a free TV player, it is a good idea to test your VPN before the episode is broadcast live.

This approach guarantees that you’ll have enough time to contact your VPN’s customer support team for help with setting up or unblocking the new episodes when they air.

SBS has exclusive live broadcasting rights to The Handmaid’s Tale season 5 in Australia. This network will show new episodes the day after they air in the US, at 8:30PM AET (6:30PM AWT).

While SBS doesn’t allow you to watch directly on its website, you can stream the channel live on Freeview Australia. You will be able to watch episodes shortly after they’ve finished via SBS On Demand, although you’ll have to create a free account first. This is very simple and just requires you to verify your email address. It’s important to note that new episodes will only be available for a limited time (between 7 and 30 days, depending on the show).

The first four seasons are available on Stan, a streaming service that costs $10 AUD per month. Stan includes a 30-day free trial, however, meaning you can watch every episode and cancel before being charged.

SBS and Freeview Australia are both geo-restricted. As such, you’ll have to either be in Australia or using an Australian VPN server to watch. We recommend NordVPN: it’s a fast, secure service that includes a 30-day money-back guarantee. If you’re not satisfied, you can simply cancel to receive a full refund.

Where else can I stream The Handmaid’s Tale season 5?

The new season will be broadcast in several regions worldwide. Below, we’ll explain which broadcasters are showing season 5 of The Handmaid’s Tale in your country.

Hulu actually produces The Handmaid’s Tale, so it should come as no surprise that it’s the series’ exclusive broadcaster in the US. Unfortunately, there’s no free trial with the base subscription anymore (although Hulu with Live TV still offers this). Regardless, Hulu only costs $5.99 USD per month and grants you access to not just The Handmaid’s Tale, but hundreds of other shows as well.

Not quite caught up? Hulu also has every episode from the last four seasons. This service is only available in the US, meaning you’ll need a VPN to access it abroad.

In the UK, season 4 will be broadcast on Channel 4, meaning you can watch online via All 4 or TVPlayer.com.Unfortunately, though, there’s no firm date just yet, with the network simply claiming that the show will arrive “later this year”. According to the radio times, it is due to air in the next couple of months. With this in mind we predict that Channel 4 will show it as soon as it finishes on Hulu in the US.

On the plus side, these services are completely free to use, though you will have to create an account before streaming anything. During the registration process, you’ll be asked to enter your postal code; this is for statistical purposes only and isn’t used to verify your location. In fact, you can enter any UK postal code and still be allowed to sign up.

The first three seasons are available on Now TV. This service costs £9.99 per month and includes a seven-day trial, meaning if you’re quick, it’s possible to watch every episode without being charged. You can also purchase each season on Amazon Prime Video, but as you can watch it for free elsewhere, there’s really no reason to.

Channel 4, TVPlayer, and Amazon Prime Video’s UK catalog are only available in the UK. You can access these services abroad using a British VPN server.

Crave carries every prior episode and will be adding new ones as they’re released. This service usually costs $9.99 CAD per month, but it comes with a one-month trial. As such, you should be able to stream seasons one, two, three, and four of The Handmaid’s Tale completely free. Afterward, just remember to cancel so your payment method isn’t charged.

Both of the services above are geo-blocked, so you’ll have to connect to one of your VPN’s Canadian servers to access them from other countries.

The Handmaid’s Tale is a hugely popular show with a massive international following. As a result, it’s highly likely to air in numerous regions worldwide. We’ve covered every confirmed international broadcaster of season 5 above, but as the premiere draws closer, we can expect more to be announced.

If you’re unsure of where to watch, we recommend checking your country’s largest broadcasters’ websites. When a network secures a high-profile show like this, it’s often advertised on the main page.

Still can’t find a local broadcaster? It’s possible that, like the UK, your country has a slightly different premiere date, or that no date has been confirmed yet. If you’re traveling and looking to stay up to date, remember that you can access other countries’ streaming sites from anywhere using a VPN.

What can we expect from season 5 of The Handmaid’s Tale?

Below, we’ll discuss the implications of what to expect from the upcoming season. Warning: spoilers follow.

Season 5 will continue to explore the trauma experienced by June in her escape from Gilead to Canada. In season 5, we will see Gilead expand its influence in Canada. June will continue her search for her daughter, and she will experience the consequences of killing Commander Waterford. We will also his widow Serena Waterford attempt to increase her profile in Toronto.

Other than these tiny details, the makers of the show have remained very tight-lipped over the coming series. However, according to some of the cast, we are in for a highly eventful season. It will be action-packed and will wow audiences with plot lines that nobody could have predicted. You can watch the season 5 trailer to get a taste of what to expect.

Who is the cast for season 5 of The Handmaid’s Tale?

A lot of details about season 5 of the Handmaid’s Tale have been successfully kept secret. However, we do know that all the major actors are set for a return. That means you should expect to see the following characters in season 5:

You will also see Christine Ko (Dave and Hawaii 50) join the cast as Lilly, a refugee who is helping to fight Gilead in the resistance movement.