Which VPNs work with Netflix in other countries besides the US? 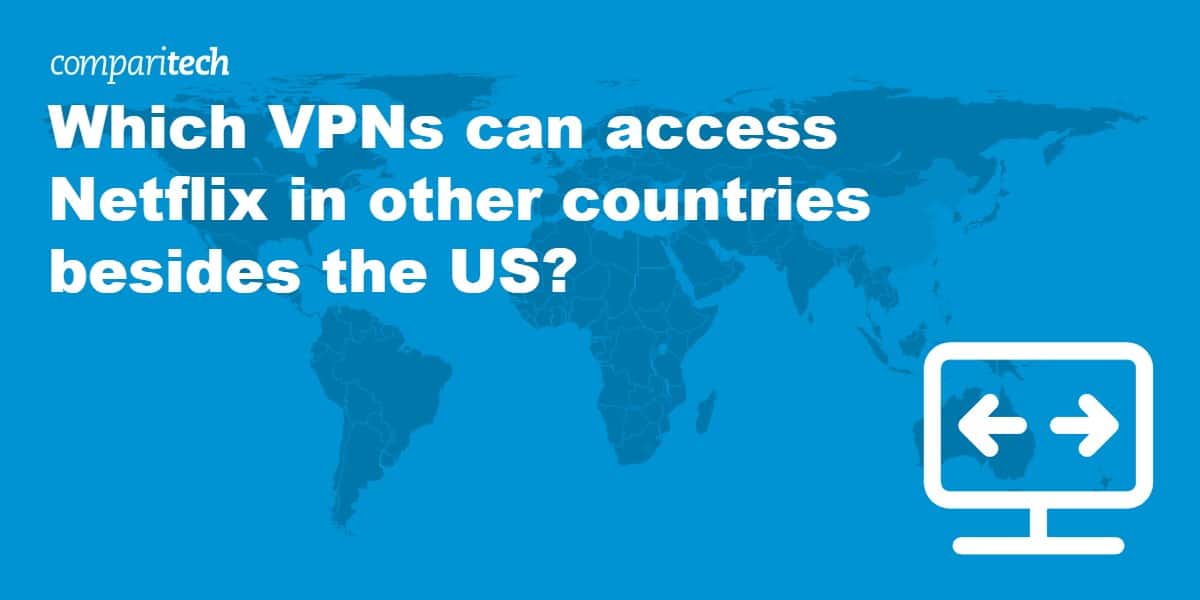 Here at Comparitech, our testers frequently test a number of VPNs to find out if they can be used to access American Netflix content from outside the US. You can find these in our US Netflix VPN list. We focus our efforts on the US because, as the data shows, the US Netflix catalog has more movies and TV shows than any other country.

The latest numbers, however, show Netflix US has 1,200  and 4,330 movies. Those figures actually dropped by 26 percent and 33 percent, respectively, from two years prior.  Experts believe the decrease is due to competition, a larger focus on originals, and cutting out unpopular older titles. Other countries, meanwhile are catching up with larger and newer catalogs of their own.

Other countries’ versions of Netflix still have many shows not available in the US, after all. And viewers might only be able to get subtitles in their native language when using Netflix in certain countries. So which VPNs can access Netflix outside the US?

To be blunt, testing this by ourselves is too much work. To maintain a reliable, regularly updated list of which VPNs work with Netflix in which countries would be a full-time job in itself. Quite frankly, there’s not enough demand for us to make that kind of investment.

But what we can do is ask the VPN providers. So we did. We contacted the six VPNs we already know are capable of working with US Netflix to ask if they can access the streaming service in the following countries:

And here are the results in a table so you can compare side-by-side (we’ve also rounded up some discounts and coupon codes for most of these services a little later in the article): 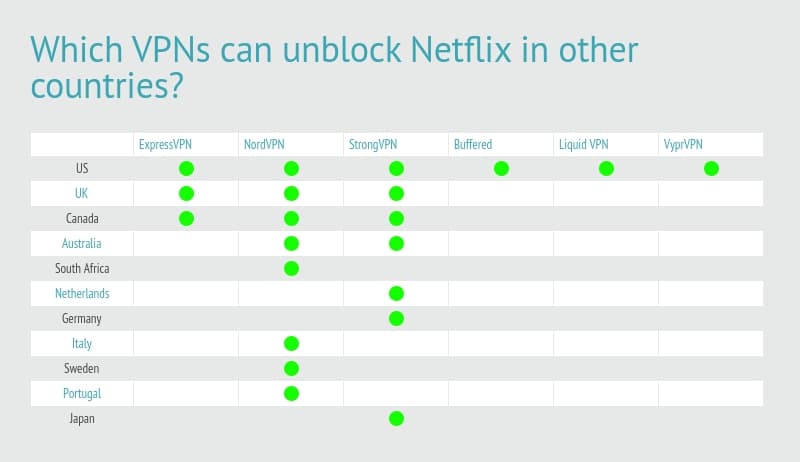 NordVPN and StrongVPN claim to be the strongest performers in our survey, if you want access to US, UK or Canadian Netflix we like ExpressVPN.

Note that we also asked about France, India, and Russia, but the responses all came back negative for those countries and thus we did not include them in the test results.

If you find through personal experience that this table is not accurate, do let us know in the comments and we will make a point to test it ourselves.

NordVPN says it works with Netflix in the US, the UK, Canada, Australia, South Africa, Italy, Sweden, and Portugal. NordVPN was also one of the only VPNs that can access both the Netflix app and Netflix in a browser, whereas most other VPNs are unable to work with the app. To find out which servers to use, contact customer support or consult the knowledge base on the NordVPN website. NordVPN makes apps for Windows, MacOS, iOS, and Android. It scores highly in our security review and allows six simultaneous connections on a single subscription.

Best survey performer:NordVPN is a solid all-rounder. Works with Netflix both in the browser and in the Netflix app. Solid security and privacy performer. Includes a 30-day money back guarantee so you can try it risk-free.

StrongVPN ticks the boxes for the US, the UK, Canada, Australia, the Netherlands, Germany, and Japan. We’re not huge fans of the app design, but we can’t deny that StrongVPN is good at accessing geo-locked content. It’s a favorite among users in China as it’s a veteran when it comes to bypassing the Great Firewall.

TRUSTY AND RELIABLE:StrongVPN is a good all-rounder. Great for users who want to watch Netflix and Hulu or evade censorship. Even works great in China. Be prepared for manual server configuration. 45-day money back guarantee.

ExpressVPN works with Netflix in the US, Canada, and the UK. That makes it a solid option for English-speaking unless you want Australian content. To find out which servers to connect to, just ping the 24/7 live support on the website and ask. After proving you’re a customer, the professional staff will give you a shortlist of server to try. ExpressVPN makes excellent, simple-to-use apps for Windows, MacOS, iOS, Android, and Linux (command line).

MOST CAPABLE:ExpressVPN holds its own. A fast and reliable choice that confidently accesses all major streaming services with ease including Netflix, Hulu, Amazon Prime, BBC and others. Comes with a Fire TV specific app. Great privacy features and keeps no logs. One of the few VPNs to work in China and UAE. Try it risk-free with the 30-day money-back guarantee.

Netflix launched in Australia in January 2016. Australia’s Netflix catalog is comprised of 958 TV shows and 2,362 movies, according to CompareTV.com.

The lineup now includes almost all of the Netflix original series like House of Cards, Narcos, and Orange is the New Black. It’s still missing some big name titles available in the US, however, including Breaking Bad, Twin Peaks, and Parks and Recreation.

The British version of Netflix launched in January 2012. The UK’s Netflix catalog is made up of 605 TV shows and 2,489 movies, according to JustWatch.

UK subscribers get most of the Netflix original series like Stranger Things, Daredevil, and Sense8. Brits also get some releases on Netflix earlier than their US counterparts, and a few hundred titles that Americans don’t get access to at all.

Netflix expanded to Canada in September 2010. Netflix Canada subscribers get 583 TV shows and 2,785 movies, according to JustWatch.

Netflix Canada has a handful of titles not available on the US version, including Doctor Who, Mike Tyson Mysteries, and Spongebob Squarepants. Viewers also get the bulk of Netflix originals.

Not working? Try this.

Remember that simply turning on a VPN might not be enough. Here are a few other tweaks to make if you find yourself on the wrong end of the Netflix proxy error despite using a VPN on this list.

When connected to most VPNs, Netflix gives the following error, accompanied by error code m7111-1331-5059:

If you think your VPN should work but you get this error anyway, try the following.

This is particularly a problem on Windows 10, which sends server requests over all possible channels, including IPv4 and IPv6. Sometimes, not all of them get sent through the VPN tunnel. If that happens, Netflix will notice a mismatch between your supposed locations and flag your connection as coming from a VPN, in turn locking you out. The IPv6 problem can also affect Macs, however.

To find out if you’re suffering from IPv6 leaks, try out our DNS leak test tool.

How to disable IPv6 on MacOS:

Watch Netflix in a web browser, not in an app

The Netflix app used on Android and iOS devices, including smartphones and set-top boxes, is more difficult to bypass than the website version you watch in a browser. To our knowledge, only ExpressVPN, NordVPN, and VyprVPN are capable of accessing the Netflix app, and we’ve only tested those three providers with the US version.

This happens because the app can override your VPN’s DNS settings and send requests to a local public DNS nameserver instead of the one specified by your VPN. Netflix cannot do this in a browser, however, so if you don’t have one of those three VPNs you can watch in a browser instead of an app.

Make sure you use the VPN’s DNS servers

Somewhere in the VPN app settings, there’s probably an option to toggle that routes all your DNS requests through the VPN’s DNS servers rather than your ISP’s. Make sure this is enabled.