How to watch Inside No. 9 season 5 online free

Looking for a way to watch Inside No. 9 season 5 online for free? Read on to find out how to live stream Inside No. 9 and how you can do so from abroad using a Virtual Private Network (VPN).
Mark Gill TECH JOURNALIST, VPN AND PRIVACY SPECIALIST 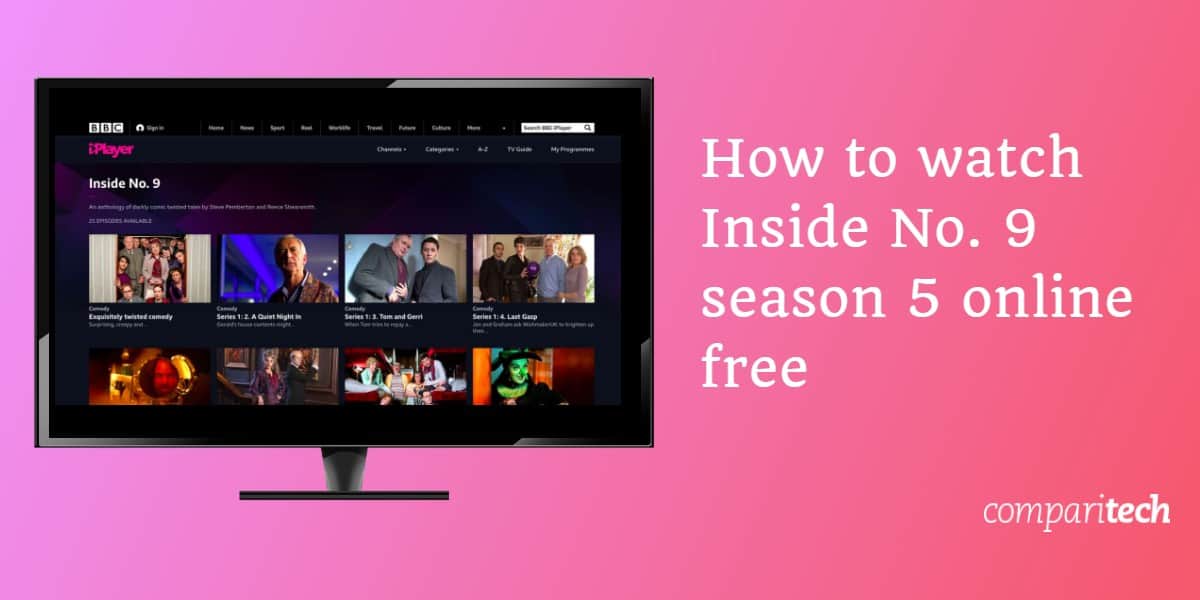 Inside No. 9 premieres on Monday, February 3 at 10 PM GMT (5 PM EST / 2 PM PST). As with previous seasons, there’ll be six new 30-minute episodes to enjoy, with a new one airing every Monday. Here we’ll explain how you can use a VPN to live stream Inside No. 9 season 5 for free from anywhere in the world.

Note that we’ll only be recommending official sources for watching Inside No. 9 season 5. One reason for this is that unlicensed streams are typically low resolution and plagued by lag. Secondly, streams from unauthorized sources may be suddenly taken offline for violating copyright. Fortunately, you can watch Inside No. 9 season 5 online free so there’s no need to risk missing out due to a questionable stream.

It’s important to know that Inside No. 9 season 5 will only be shown on region-locked platforms. To watch it on your usual services while abroad (outside the UK), you’ll need to use a VPN.

How to watch Inside No. 9 season 5 online with a VPN

Content on most streaming services is geo-blocked due to rights restrictions. These platforms use your IP address to identify your location. By using a VPN, you can make it look as if you’re browsing another country. This allows you to unblock geo-restricted content such as Inside No. 9. Below you’ll find a simple step-by-step guide on how to do this.

Here’s how to live stream Inside No 9 season 5 online free from anywhere:

Inside No. 9 season 5 episodes will be broadcast live. That’s why we recommend you test your VPN with BBC iPlayer in advance. If you encounter any issues, you’ll then have plenty of time to contact your VPN’s customer support and avoid missing out as a result.

Produced by the BBC, Inside No. 9 will premiere on BBC iPlayer. This means you’ll be able to watch all of the new episodes online for free. In fact, seasons 1–4 are all available to stream on BBC iPlayer already. In order to watch BBC iPlayer content, you’ll need to sign up for a free account, providing your name, date of birth, and email address. While you’ll also be asked to provide a UK postcode, any UK postal code is accepted.

BBC iPlayer content is geo-restricted and only available in the UK. If you want to live stream Inside No. 9 while traveling abroad, you’ll need a VPN. Simply connect to a server in the UK and you’ll have a UK IP address for unblocking the content. You can do this with ExpressVPN which comes with a 30-day money-back guarantee. As such, you can try it out with BBC iPlayer risk-free and, if unsatisfied, cancel to receive a full refund.

Where else can I watch Inside No. 9 season 5?

The only place to watch the premiere of Inside No. 9 season 5 online is BBC iPlayer. However, there are a number of options when it comes to watching the first four seasons of Inside No. 9. This makes it likely that season 5 will come to these platforms in the near future.

In particular seasons 1–4 of Inside No. 9 can be found on Netflix UK. Plans for this subscription-based streaming service start from £5.99. However, new customers can enjoy a one-month free trial. Alternatively, you can purchase individual episodes on Amazon Prime Video from £1.89 or a whole season from £9.99. The same can be said for YouTube on which single episodes cost from £1.99 or from £13.49 for a season.

Whether watching via Netflix, Amazon Prime Video, or YouTube, you’ll need to use a VPN to watch from certain countries. All you need to do is connect to a server in the UK for a UK IP address and you’ll be able to unblock all of the above options even if you’re traveling abroad.

What can we expect from Inside No. 9 season 5?

Inside No. 9 Season 5 brings six new 30-minute episodes, the first of which is titled “The Referee’s a W***er”. As always, each episode of this anthology series will feature its own original story with a dark comedic twist. Little information has been released but the first episode will focus on a football match and is described by the BBC as “a tale of promotion, relegation, corruption, and so, so much more.”

Which cast members are returning for Inside No. 9 season 5?

Every Inside No. 9 episode features new characters which has allowed the show to attract some well-known actors in the past including Gemma Arterton, Timothy West, and Tamsin Greig. Season 5 is no exception with the first episode featuring Ralf Little and David Morrissey. As always, creators Reece Shearsmith and Steve Pemberton will play prominent roles throughout.