How to watch Fury vs Schwarz live online from anywhere

Want to stream the Tyson Fury vs. Tom Schwarz fight online for free? We’ll let you know how to watch Fury vs. Schwarz live, from anywhere, with a Virtual Private Network (VPN).
Ian Garland Streaming, Kodi and VPN Expert 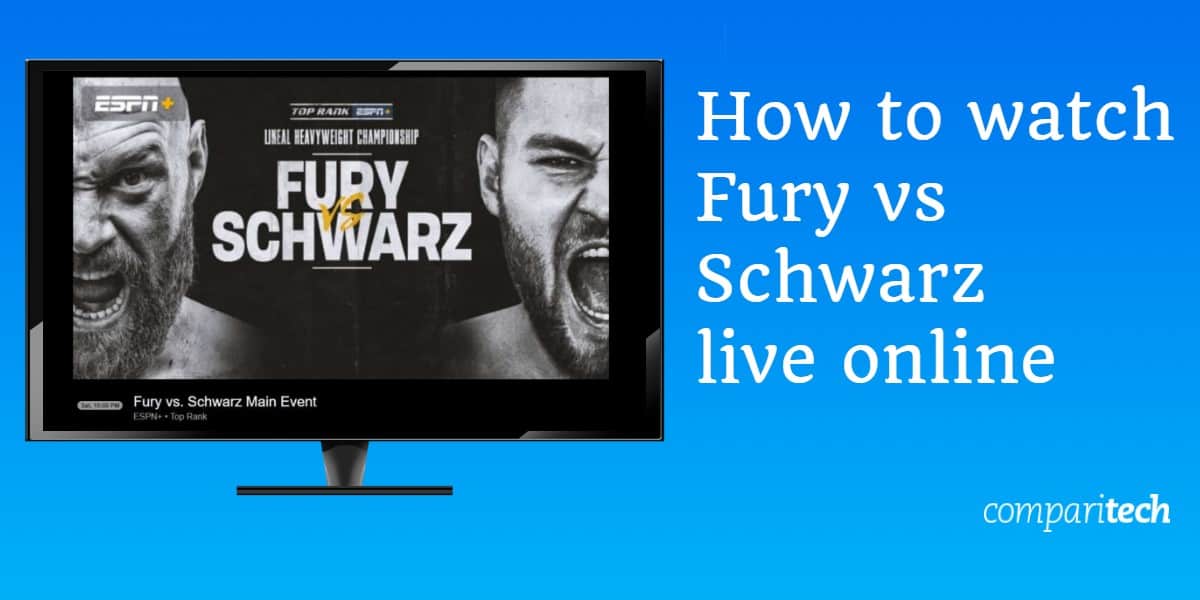 Fury will face off against Schwarz at the MGM Grand Garden Arena in Las Vegas on June 15. The undercard fights will begin at 7 PM EST (4 PM PST / 12 AM BST) but the main event won’t begin until closer to 10 PM. With eight fights in total (including Vianello vs. Hickman and Lowe vs. Vue), there’s plenty to look forward to, and below, we’ll explain how to watch all of the action live online. We’ll even show you how to take advantage of free trials so you can live stream Fury vs Schwarz free of charge!

It’s important to note that we’ll only be recommending official broadcasters. Third-party streams are almost inevitable for major sporting events, but we strongly advise against using them. Often, they’re laggy, or only provide low-resolution video. There’s also a chance that they’ll be taken offline for copyright violation partway through. There are legitimate ways to watch in several countries, so there’s no reason to resort to shady, unauthorized streams.

The services broadcasting this event are region-locked. This means that you’ll need a VPN to watch Fury vs. Schwarz from abroad.

How to watch Fury vs. Schwarz online with a VPN

Once you have a suitable VPN, bypassing regional restrictions becomes trivially simple. Just follow the steps below to spoof your location and stream Fury vs. Schwarz from anywhere:

This fight will be broadcast live, so it’s important to make sure your VPN works well in advance. We recommend running through the steps above at least an hour before the event begins; this way, if anything goes wrong, you’ll still have time to get help from your VPN’s customer support team and might not have to miss the start of the fight.

How to watch Fury vs. Schwarz for free on US TV

ESPN will broadcast this event in the US. The undercard matches will be shown on ESPN2 and ESPN Deportes (with Spanish commentary) from 7 PM EST, but the Fury/Schwarz fight will air exclusively on ESPN+ at around 10 PM EST.

If your cable TV package already includes ESPN, you can simply log in to the website or WatchESPN app and stream the undercard fights for free. Don’t have cable? You can also watch ESPN2 live on Hulu with Live TV, PlayStation Vue, Sling TV, or YouTube TV. Better still, these services all come with a free trial. As ESPN+ also offers a seven-day trial, you can simply sign up and stream Fury vs. Scharz for free. Just remember to cancel before the trial ends to avoid being charged.

All of the streaming services above are region-locked. Additionally, most only accept payment methods linked to a US address. Americans who are travelling abroad can still use these platforms by connecting to an American VPN server, however. Still need a VPN? ExpressVPN comes with a 30-day money-back guarantee allowing you to try it risk-free.

Where else can I watch Fury vs. Schwarz online?

Outside of the US? Don’t worry: there’s still a good chance you’ll be able to stream Fury vs. Schwarz online. Below, we’ve listed every confirmed international broadcaster for this fight:

This fight will be shown exclusively on BT Sport Box Office. You don’t actually need a BT Sport subscription to watch, since Fury vs. Schwarz is a pay-per-view event. Passes cost £19.95 each, with coverage of the undercard fights starting at around 11:30 PM BST.

Although you can purchase a fight pass directly through your Virgin, Sky, or BT TV box, we don’t recommend doing so. This method doesn’t give you access to the online player and while all of these providers have their own TV streaming apps, none of them actually allow you to watch BT Sport Box Office online. We recommend buying a pass on the BT Sport website instead, though you’ll need a payment method linked to a British address.

BT Sport is geo-restricted and only available in the UK. To access this service from abroad, you’ll have to use a VPN.

In Canada, the Fury vs. Schwarz fight will be shown with English and French-language commentary on TSN and RDS, respectively, at 10 PM EST. However, there’s currently no confirmed broadcaster for the undercard matches. It’s possible that the networks are still finalizing the details, but we’ll update this post with any new information as it becomes available.

If your cable TV package includes either of these channels, you can simply sign in online and watch the fight at no added cost. TSN and RDS both offer passes for $4.99 CAD, so you’ll still be able to watch, even if you don’t have cable.

TSN and RDS are both geo-restricted and only accept payment methods linked to Canadian addresses. This makes it difficult for foreign users to sign up but existing subscribers can still log in from abroad using a Canadian VPN server.

On the face of it, Fury seems almost a sure bet to win this fight. He has more experience and more knockouts, and is currently one of the top five heavyweights in the world. However, it’d be unwise to write Schwarz off entirely: he’s yet to lose a match, and has won 66 percent of them by knockout. Schwarz is going to have to give this fight his all, though, especially as Fury will be looking to win decisively after his controversial draw against Wilder back in 2018.

We can expect Fury to play a little safer than usual, perhaps letting Schwarz tire himself out before pushing aggressively in the later rounds. The general consensus among fans is that we can expect to see a stoppage before the tenth round but whoever wins, it’s sure to be a highly memorable fight.