Can’t watch Hulu abroad? Don't worry, there's a fix. Find out how to overcome geo-restrictions and easily unblock your favorite content on Hulu in Canada or the UK with a VPN.
Paul Bischoff TECH WRITER, PRIVACY ADVOCATE AND VPN EXPERT 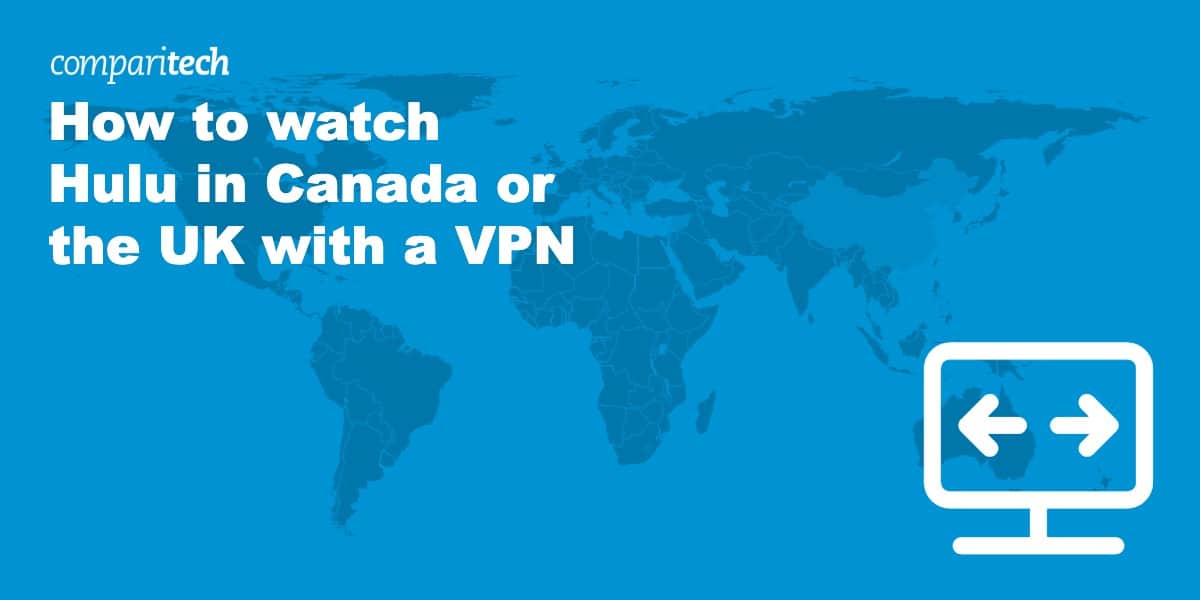 Hulu isn’t officially available outside of the United States or Japan. If you try to watch Hulu while traveling in Canada, Australia, the UK or any other country, you will encounter the following error message:

“Sorry, currently our video library can only be watched from within the United States.”

After Netflix, Hulu is one of the most popular streaming video services in the United States. So being stuck behind that firewall can be a pain, especially if you’re traveling and want to watch Hulu in the UK, Canada, or anywhere abroad on a temporary basis. Luckily, there’s a way to get around it. Connecting to a VPN to watch Hulu will solve all of your problems.

A VPN is a type of proxy service that changes your device’s IP address to one in another location. This can make it appear to Hulu as if you are accessing the site or app from the United States instead of Canada or the UK. All you need to do is install the software, choose a server in the US, and connect to it. Now that all your internet traffic is routed through a US server before going to Hulu, you can watch to your heart’s content.

But there’s a catch: Hulu has gotten really good at blocking VPN users. In order to enforce the content licensing restrictions imposed by copyright holders, Hulu detects and blocks any user it finds using a proxy connection. It’s better at blocking VPNs than Amazon Prime and HBO Now. It’s even better than Netflix.

Because of this, your options are limited. A handful of VPNs can still get around Hulu’s firewall without detection. They all require a paid subscription, so don’t expect a free fix. Some are still small enough not to warrant Hulu’s attention, while others are big players with the resources to pour into advanced obfuscation tactics and reacting quickly to IP bans.

#1 FOR UNBLOCKING HULU IN CANADA & UK:NordVPN can bypass even the strongest geo-restrictions. Unblocks Hulu in Canada and the UK effortlessly. Best-in-class security and privacy with 256-bit AES encryption. Try it risk-free with the 30-day money-back guarantee.

How to unblock Hulu with a VPN

After you’ve signed up for a VPN and have installed the VPN app on your device, the rest is easy.

If you still get an error, try choosing a different VPN server or location, clearing your cookies, and/or clearing your web browser cache. We’ve got more troubleshooting tips below.

Even with VPNs that support Hulu users, not just any server in the US will do. You might need to contact customer support and ask which servers currently work with Hulu and connect to those. The servers occasionally get blocked and new ones are added as Hulu plays a cat-and-mouse game with VPN providers. For this reason, a VPN provider with live support, such as NordVPN, is really handy.

Watching Hulu from abroad on a Smart TV, Roku, Fire TV or Chromecast

Watching Hulu with a VPN from abroad is hard enough, but watching on a streaming media device such as Roku, Fire TV, Chromecast, or even some Android-based devices is more difficult. These devices don’t have built-in support for VPNs.

That means the VPN must be set up on a router. You can use either your physical home wifi router or use a Mac or Windows laptop to create a virtual wifi router, which is sort of the same as setting up a wifi hotspot on your phone.

Even when using a VPN that claims to work with Hulu, there’s a chance you’ll still encounter an error message on Hulu instructing you to turn off your “anonymous proxy.” This is because the vast majority of VPNs still don’t protect against IPv6 leaks. While a VPN can route all your traffic requests through its own DNS servers and mask your IPv4 address, IPv6 addresses still get sent without being hidden. IPv6 serves the same purpose as IPv6 but contains a far wider range of possible IP addresses for internet-connected devices.

The solution is an imperfect but effective VPN block workaround for Hulu: disable IPv6. We say it’s imperfect because it would be better if everyone switched over to IPv6 due to the IPv4 protocol running out of unique IP addresses. Limiting yourself to IPv4 is bad for the long-term health of the internet, but it won’t affect much else.

How to disable IPv6 on Mac OSX:

How to watch Hulu on Kodi

Kodi subscribers can install an add-on to watch Hulu on Kodi. Kodi is a free home theater software application that streams media from a wide range of sources. It runs on multiple platforms including Windows, Mac OSX, Android, Linux, and Raspberry Pi.

All of the geographic viewing restrictions still apply, so you’ll still need a VPN. Find the Hulu Plus Kodi add-on (Google is your friend!). Learn how to install Kodi repositories and add-ons using our tutorial and to find a VPN check out our article on the best VPNs for Kodi users.

Paying for Hulu from outside the US

Hulu requires customers’ money to come from the US as well, at least for the first payment. This can be a pain for Americans who are currently living abroad.

Below are a couple of solutions that reportedly allow those without a US credit card or PayPal account back home to pay for Hulu. Full disclosure: these methods are second-hand knowledge, and we did not test them out for ourselves.

Related: How to watch US Netflix with a VPN.

Is it Legal to Stream Hulu in Canada using a VPN?

Using a VPN to stream Hulu in Canada is not illegal. Although you are not breaking any laws, using a VPN for Hulu violates its terms of service. This is exactly why the platform has gotten so good at identifying and blocking VPNs from working. It’s best to use a VPN with strong security and encryption features so that you can remain undetected. The risks of getting caught include IP bans or potentially even complete account closure.

How can I watch Hulu without a VPN in Canada?

Unfortunately, it is not possible to watch Hulu without a VPN in Canada. Anywhere outside of the US is currently geo-blocked because of licensing and publishing limitations. A VPN is the only way to bypass these restrictions, and it also takes a very specific type of VPN to do so.