Kodi Solutions IPTV has become popular with consumers who wish to avoid the high price of cable and satellite TV service. With a collection of channels from around the world at a cost of only $5 per month, it seems like a great deal. But many wonder if Kodi Solutions can stay in business while offering so many channels at such a low price. 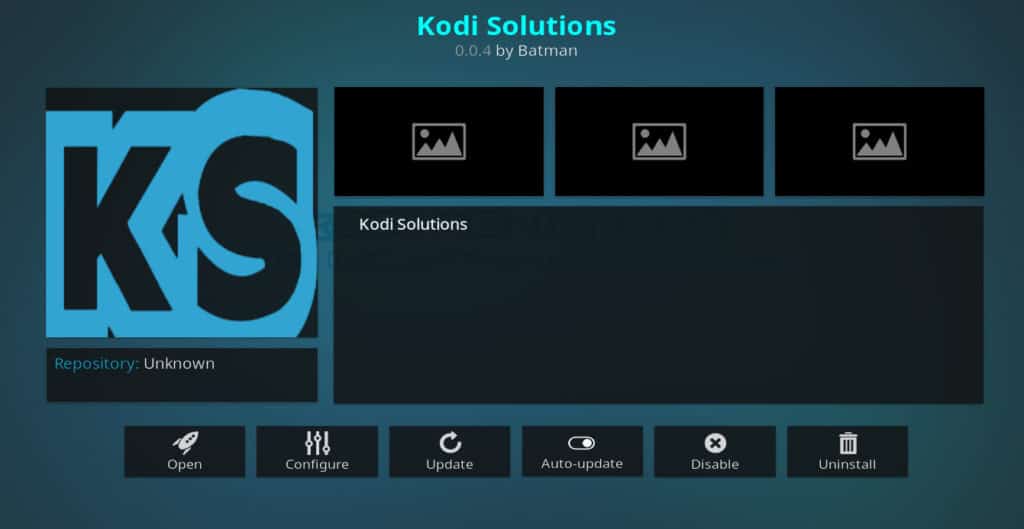 We will go into more detail about Kodi Solutions below, but here is a quick rundown of what you need to know: Kodi Solutions IPTV is very inexpensive, but its apps can only be downloaded from third-party sources and may have security issues. In addition, Kodi Solutions offers a wide variety of channels, but there it is hard to determine how the service is able to offer its channels at a low cost while also paying the sometimes pricey rebroadcast fees networks like ESPN often charge.

The Kodi Solutions app is also a bit risky to use. Subscribers relying on it will need to take extra steps to protect themselves against potential malicious activity from the app, ISP snooping and speed throttling, attacks by hackers, and other privacy and security problems.

Disclaimer: Comparitech does not condone or encourage any copyright violation, including streaming video from pirated IPTV sources. Please consider the local laws, victims, and risks of piracy before downloading or streaming copyrighted material without permission.

Warning: Always use a VPN with your IPTV service

There are certain security risks to using IPTV services. For example, your ISP can log all of your online behavior, including what programs you are watching and where you stream them from. It can then sell this information to third parties, as long as it first notifies you of this change to your service agreement by email. If your ISP is hacked, this information can be stolen, revealing personal information about you to the world.

If your ISP knows you are streaming video, it may also throttle your Internet speed to save bandwidth.

For these reasons, you should always use a VPN when you use IPTV services. A VPN will encrypt the data you send and receive from your IPTV service or any other website, keeping your online activity private and protecting you from snooping ISPs and hackers.

We’ve tested quite a few VPN services and found that ExpressVPN is the fastest and most secure. It has apps available for TV devices, PCs, smartphones, and tablets. It has over 140 servers in 90+ countries. It keeps no logs. It’s a great way to keep your streaming activity private and secure.

What is Kodi Solutions IPTV service?

The Kodi Solutions app is only available for Android devices. It cannot be run on a PC, Mac, iPhone, iPad, or Roku. However, there is a Kodi addon for this service available that will allow you to stream from any device that can run Kodi.

Should you use Kodi Solutions IPTV?

Given the low cost of the service and the huge number of channels, there are many questions regarding how Kodi Solutions IPTV is able to stay in business while paying the sometimes-pricey carriage fees required by networks. Some services similar to Kodi Solutions IPTV, such as Fab TV and others, were taken offline after lawsuits alleging they failed to pay these carriage fees. In the case of Fab, it even recommended that its users don’t request or they might face legal repercussions due to the illicit nature of their service.

There is no way to know if this is also the case for Kodi Solutions IPTV. However, there are some facts to consider about the service for anyone interested in signing up.

Most legitimate IPTV services charge at least $25 for a package of channels that includes no premium movie or sports channels. To get a package with all of the movie and sports channels, including HBO, Showtime, Cinemax, MLB Extra Innings, NBA Pass, and others, a user would normally have to pay over $100/month. This doesn’t include foreign channels, which would cost even more.

The reason why these channels are so expensive is because IPTV services have to pay for the right to rebroadcast them. The more channels an IPTV service offers, the more costly it is for the service to provide the package. As a result, well-known IPTV services like Sling TV, fuboTV, DirecTV Now and others try to recoup this cost by charging consumers more for extra channels.

By contrast, Kodi Solutions only charges consumers based on the number of devices they stream from simultaneously, not on the number of channels they have access to. This implies that users are probably being charged for bandwidth, not for rebroadcast rights. In addition, the price of the package is absurdly low for the number of channels offered, raising some notable and unanswered questions regarding Kodi Solutions’ business model and sustainability as a company.

It could be that Kodi Solutions is somehow operating a verified service and has discovered a way to provide channels at a lower cost than competitors like Sling TV. However, Kodi Solutions has not put forth any information to explain how it operates. Since services similar to Kodi Solutions IPTV have faced retribution in the past, potential users should be cautious.

In addition to these questions, the Kodi Solutions apk and Kodi addon carry security risks. We have found the Kodi Solutions Android app on multiple websites, all of which appear to have no relationship with the streaming service itself. In fact, a current Google search for “Kodi Solutions .apk” does not even return the official website in the first four results. This increases the likelihood for a user to accidentally download a malicious file posing as the Kodi Solutions apk.

In addition, the official website carries no less than eight different files on its apk subpage, making it difficult to determine which one the user is supposed to rely upon for using the service. This makes the app even riskier because it encourages users to download the file from rogue sites where it is simpler to download instead of from the official site.

The only way to be absolutely sure any of the Kodi Solutions apps are completely safe is to run an antivirus scanner on your Android devices after downloading the apps. This method could put your device at risk, as you may install malware before determining if the app is safe, but because Kodi Solutions does not have an app on the official Google Play Store, one of the apks are pre-screened for malware.

There is a Kodi addon that can be used with Kodi Solutions IPTV. However, this addon is only available from the “Kodi Solutions repo,” which (like the other copycat sites) appears to be unaffiliated with the service itself.

If you would like to watch IPTV without taking the legal and security risks associated with Kodi Solutions, here are some safer alternatives.

FuboTV is available on most TV devices, PCs, smartphones, and tablets. In addition to viewing fuboTV’s channels live, you can also use your fuboTV login to unlock on-demand content from apps such as AMC, FX, History Channel, Syfy, and others. This is a key advantage to using fuboTV over Kodi Solutions since Kodi Solutions only offers live content.

The cost for the basic fuboTV package is $39.99 for the first month and $44.99 for each month after the first.

If you were considering Kodi Solutions mainly for its low cost, Sling TV may be a good alternative IPTV service for you. It offers 30-42 channels for $25/month. There are two versions of the basic package: Sling Orange and Sling Blue. Both of them carry popular cable channels like CNN, FX, TBS, TNT, and others. However, Sling Blue has Disney and ESPN channels while Sling Orange has NBC, USA, and SYFY instead.

Regardless of which basic package you choose, you can add extra sets of sports, comedy, kids, or lifestyle channels for an additional $5 per month. Sling also offers sets of movie channels such as HBO or Showtime for an extra $10 per month per set. 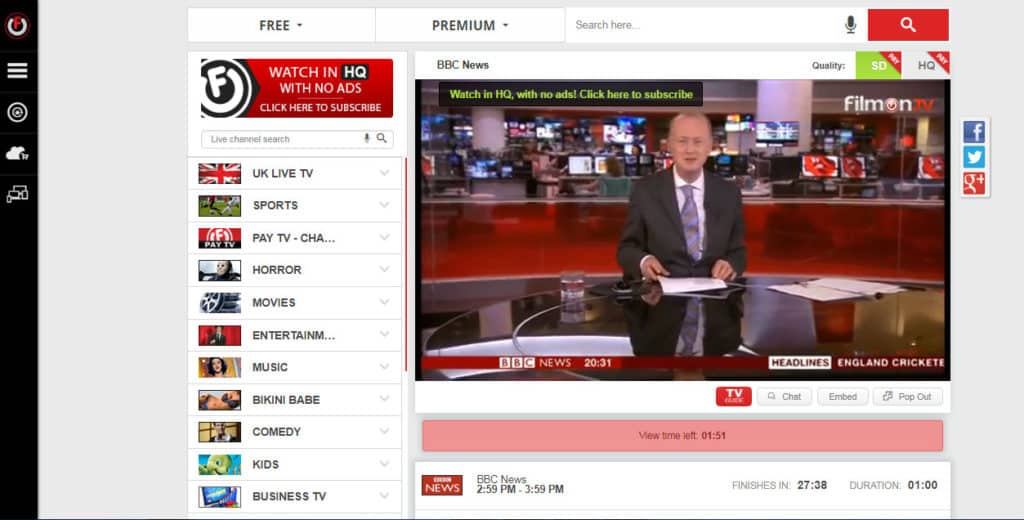 There are also categories for international channels, including channels from France, Germany, Russia, Slovakia, India, Italy, the Middle East, and Latin America. No matter what you are interested in, FilmOn probably has a channel for you.

FilmOn is available for Xbox, Android (including Nvidia Shield), iOS, Roku, Apple TV, PC or Mac. It is not available in the Amazon Fire TV app store, but the Android version can be “sideloaded” onto a Fire Stick using Downloader or a file manager app. Most FilmOn channels are also available through the FilmOn Simple Kodi addon.

Pluto.tv is available on most TV devices, PCs, smartphones, and tablets. If you prefer to watch using Kodi, there is an excellent Pluto.tv addon in the official Kodi repository.

Best on-demand services to use with IPTV

Crackle is a free on-demand TV and movie site from Sony. It earns revenue entirely through advertising.

Crackle carries a few popular original TV shows. These include Startup, which follows the ordeals of a fictional cryptocurrency/blockchain company and Cleaners, a fast-paced drama about two female contract killers who are being hunted by a former employer. Crackle also carries network and cable shows that have been canceled, such as Blacklist: Redemption, Rescue Me, and Walker: Texas Ranger.

In addition, there are many notable films on Crackle, including 50 First Dates, Anaconda, Easy A, Girl Fight, Hollow Man, and others.

Although most free streaming video sites carry few high-definition titles, Crackle is an exception. The majority of its catalog is at least 720p.

Crackle is available on most PC, mobile, and TV device platforms. If you’d rather skip the commercials, you can do so with the Crackle Kodi addon.

Hulu is a premium video streaming site that carries award-winning original shows such as The Handmaid’s Tale. It also carries major network TV shows like This Is Us, Blindspot, and Law And Order: SVU. Hulu carries popular movies too, including Arrival, Jack Reacher: Never Go Back, Hot Chick, The Emperor’s New Groove, and more.

Hulu costs $7.99/month for an ad-supported subscription or $11.99/month without ads. It is available for iOS, Android, Amazon Fire TV, Xbox, Nvidia Shield, Roku, or any device that has a web browser.

You can also get Hulu with Live TV for about $40 per month. This is Hulu’s solution to the growing demand for live TV options and is a good replacement for Kodi Solutions IPTV. It even comes with Hulu’s on-demand service bundled in for no added cost.

Tubi TV is a free, on-demand video app and website. It is rumored to have the second-largest catalog of any streaming video site, if not the largest. The stipulation with that, however, is the fact that Tubi TV employs geographic content blocking across the regions where it’s available (US, UK, Canada). To unlock all of the TV shows and movies the service provides, you’ll need to connect to a VPN server in one of those countries.

Tubi TV has an app for Roku, Apple TV, Xbox, Amazon Fire TV, PS4, Tivo, Android and iOS. It can also be viewed using a web-browser. There is a Tubi TV Kodi addon as well.