How to live stream the Emmy Awards 2019 from anywhere

Want to watch all the Emmy Awards 2019 show fun as it unfolds? Don't miss out on one of the biggest award shows of the year, even when you're traveling. We explain how to live stream the Emmy Awards 2019 from anywhere in the world using a VPN.
Aimee O'Driscoll VPN AND CYBERSECURITY EXPERT 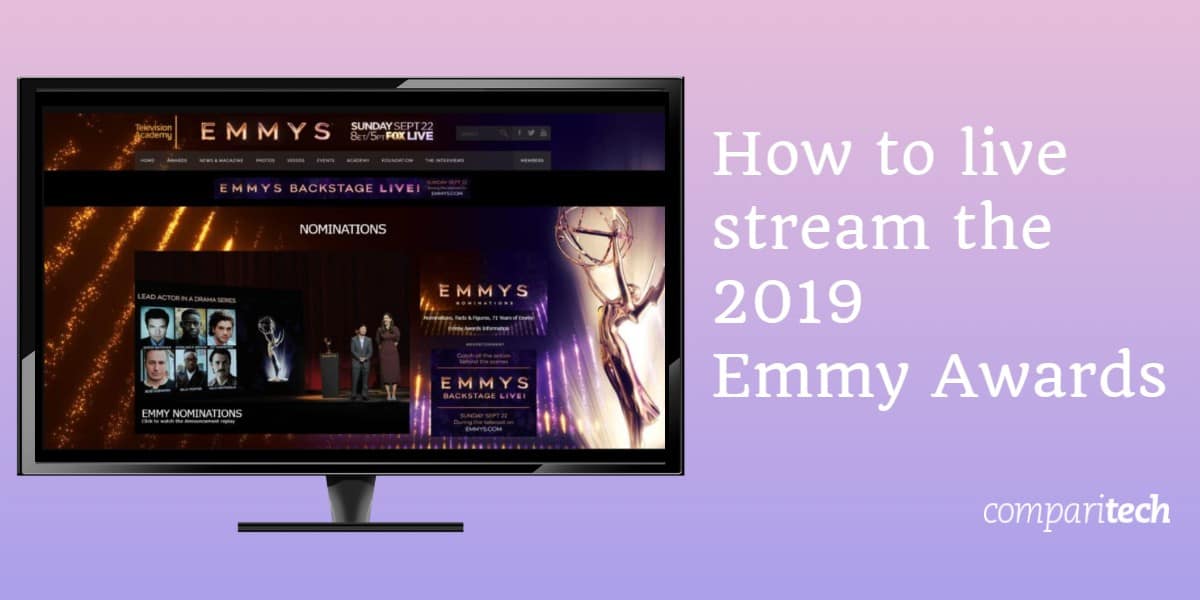 The Emmy Awards will take place on Sunday, September 22nd in the Microsoft Theater in downtown Los Angeles, California, and will air at 8 pm EST / 5 pm PST. For just the fourth time in Emmys history the show will be hostless. Although, with lots of high-caliber presenters and plenty of great shows to celebrate, it’s sure to be an entertaining event. In this post, we’ll explain how you can live stream the Emmy Awards 2019 abroad from the US, the UK, Canada, Australia, Japan, Germany, France, or anywhere else in the world.

While some broadcasters stream their content live online, they restrict access to users located in the source country. However, by using a Virtual Private Network (VPN), you can bypass these restrictions. We’ll explain how this works and reveal where you can live stream the Emmy Awards. Note we’ll only recommend official sources, as unlicensed streams tend to offer a poor user experience.

The 2019 Emmy Awards show is airing on just a few select channels. To watch from outside a broadcast region, you’ll need to use a VPN.

How to watch the Emmy Awards 2019 online with a VPN

A VPN encrypts all of your internet traffic and tunnels it through an intermediary server in the location of your choice. It replaces your IP address with one from your chosen location so you can bypass geo-restrictions and access services such as NBC and CTV from abroad.

Here’s how to watch the Emmy Awards 2019 live online from anywhere:

While you should be able to watch with no issue, it’s definitely worth doing a test run prior to awards night to avoid missing any of the action.

Where to watch the Emmy Awards 2019

The Emmy Awards will be broadcast in many countries. Here’s where to watch.

The official broadcaster for the 2019 Emmy Awards is FOX. NBC had rights to air the show last year, but there’s typically a rotation between four networks (ABC, CBS, FOX, and NBC) and it’s FOX’s turn this year.

FOX will be showing the complete awards ceremony on TV and via an online live stream. To access the online option, you’ll be asked to sign in using credentials from a TV provider such as Xfinity, Dish, or DirecTV. While there is a long list of options, if you don’t have a subscription, then you won’t be able to watch.

If you’re traveling outside the US and trying to access the FOX live stream, you’ll likely get an error message or the live stream function simply won’t work. If you have US cable provider credentials, you can get around this by using a VPN (using the steps above) to get a US IP address. Then you’ll be able to enter your TV provider credentials as normal.

Another way to access Fox is through an IPTV provider such as Hulu’s Live TV, Sling TV, PlayStation Vue, AT&T TV NOW, fuboTV, or YouTube TV. Many of these services offer free trials, so you can sign up, watch the Emmy Awards, and then cancel. Even with these services, geo-restrictions will come into play, so you’ll need to use a VPN if you’re outside the US. And they all require that you sign up using a US payment method, so they’re not an option unless you usually live in the US.

Viewers in Canada can watch the Emmy Awards on TV or via an online stream through CTV. To access the live stream, TV service provider credentials are required. For Canadian residents traveling outside Canada, you can access the stream by using a VPN to obtain a Canadian IP address.

In Australia, the awards will be aired on Foxtel’s FOX8 channel and online via Foxtel Now. There will be a delay so you don’t have to rush home from work and can enjoy the show at the reasonable time of 8:30 pm ACT on Monday, September 23rd.

Foxtel Now is a paid subscription service but offers a free 10-day trial. Although, you’ll have to submit payment details, so just make sure you cancel before your card gets charged. To sign up from outside Australia, you’ll need an Australian IP address as well as a payment method registered in the country.

If you’re in the UK, you can watch the entire award show on Sky One. The show will be delayed so that its airs at an appropriate time for UK viewers at 9 pm BST on Monday, September 23rd.

Unfortunately, if you’re not an existing Sky user, it’s not exactly simple to get set up. To gain access to Sky channels, you need to be a full-blown customer with a Sky box installed by a technician.

However, if you are an existing Sky customer and are traveling abroad when the award show airs, you can use a VPN to connect to a UK server. Then you’ll be able to log in online as normal.

The popularity of the Emmy Awards means the show will be broadcast in dozens of countries across the globe. If we haven’t covered your country on this list, you can check the official roster of international broadcasters on the Emmys website.

Who’s up for nomination in the 2019 Emmy Awards?

As is the case every year, there has already been much excitement in the build-up to these awards. The Emmy Awards nominations were announced on July 16th, with Game of Thrones and The Marvellous Mrs Maisel leading the pack with 32 and 20 nods respectively. Here are the nominations for some of the most coveted awards: