Digital privacy is becoming a mainstream issue, and many governments around the world censor the web. For those who want open access to the web without being tracked by corporations and authorities, VPNs offer a way to enjoy internet freedom and privacy.

But which is the most popular VPN?

To find out, we looked at a number of factors, including how much each VPN has been searched for in Google, how “trendy” each VPN is, how big a social following each VPN has, how many website visits they’re getting, and how many downloads and reviews they’re getting on the App Store and Google Play.

Alternatively, if you’d like to know which VPNs are top of the list based on merit (rather than popularity), view our guide on the best VPN services here.

Which VPN has had the highest number of searches?

First, we’ll take a look at the monthly search volumes for the main keywords of each VPN provider. For example, NordVPN is “nordvpn” and “nord vpn,” ExpressVPN is “expressvpn” and “express vpn,” Hotspot Shield is “hotspot shield” and “hotspot shield vpn,” and so on.

The provider that receives the highest search volume will win this category as it suggests more people are searching for this VPN online.

So, the monthly search term winner is…

With almost 1.8 million searches per month, NordVPN is the most-searched VPN on Google. ExpressVPN comes second with 1.1 million, closely followed by Hotspot Shield with 1.04 million.

Which VPN is trending?

The above shows us how popular each VPN service is at this moment in time. But things can soon change, which is why we examined which VPN providers have been trending over a longer period of time. 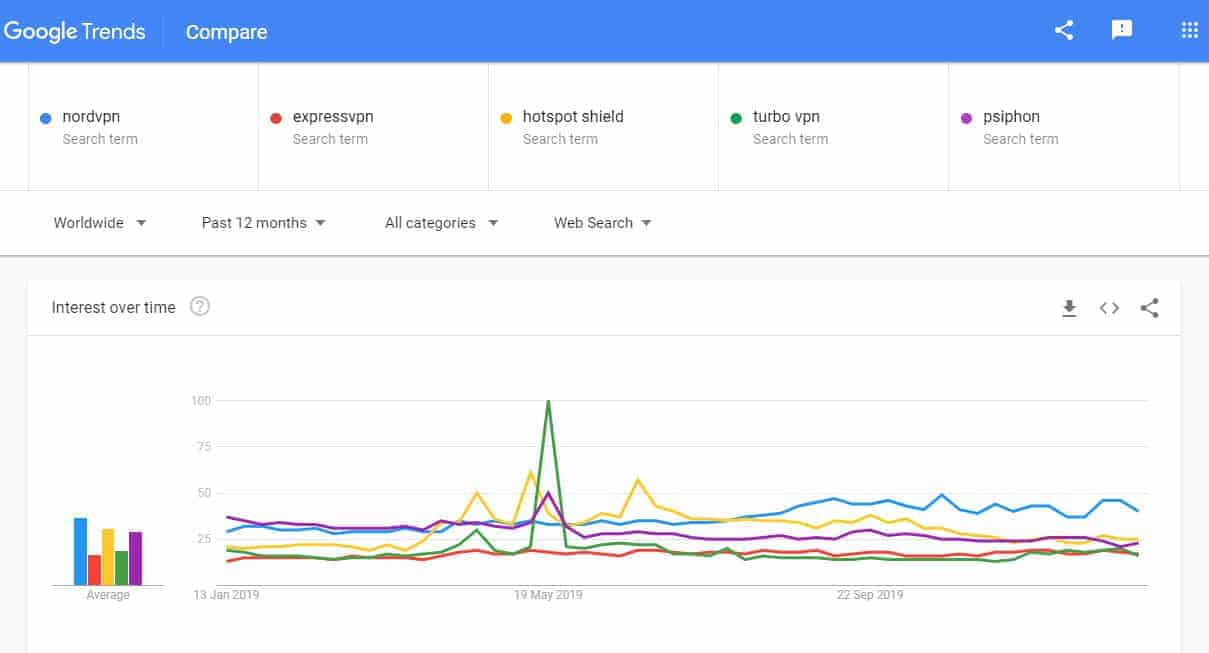 Out of the top 20 VPNs we’ve analyzed, the 5 with the most interest over the last year (from January to December 2019) are NordVPN, ExpressVPN, Hotspot Shield, Turbo VPN, and Psiphon.

We can see that NordVPN has, on average, been the most popular. The number of searches increases from August with a particular peak in October (which coincides with NordVPN’s news of a data center breach).

Hotspot Shield also enjoyed peaks in April, May, and June.

However, the largest peak is perhaps most surprising as it belongs to Turbo VPN. Turbo VPN ranked 19th in our monthly search list but moved up to fifth in 2019’s trending list. The peak itself occurred in May 2019 and far exceeds any of the others. Unlike NordVPN’s peak, which can be attributed to its news-related data breach, nothing seems to stand out for Turbo VPN. Therefore, the peak is likely due to an increase in demand, i.e. because of a good review, increased advertising, etc.

So, the most trendy VPN is…

NordVPN. And this is despite the peaks caused by the data breach. Even though more people searched for NordVPN at the time of the announcement, it doesn’t distort the overall figures or trend.

Which VPN provider has the biggest social following?

How big a social following VPN providers have on Facebook and Twitter is a great way to see how popular they are. How many people are wanting to interact and hear more about our top 20 VPNs?

With an overall social audience of 4.2 million, the hands-down winner of this category is…

Hotspot Shield, which has a huge social following on Facebook with 4.1 million likes.

In second place is Private Internet Access thanks to its large Facebook following of 1 million people. And we should also mention Tunnelbear’s impressive Twitter following of more than 200,000 followers.

Which VPN provider gets the most visitors to its website?

Using SimilarWeb, we compared the number of website visits for each provider over the last six months of 2019.

Enjoying 172.7 million visitors in the past 6 months, the winner is…

ExpressVPN. With nearly 87 percent more visitors than second-place NordVPN, ExpressVPN’s visitor numbers far exceed any of the other VPN providers. And as we can see, there was some increase toward the end of the year, especially in December when visitor numbers increased by 31 percent on the previous month.

Which VPN provider has had the most downloads?

Unfortunately, Apple doesn’t reveal the number of downloads an app has had in its store so only approximate estimates are available. However, we can see how many reviews each app has received and the overall rating it has been given. Likewise, we can get a rough idea of the number of downloads in Google Play and the rating for the Android apps.

Based on Google Play figures, the app with the most downloads and the highest number of reviews on Google Play is Turbo VPN. With almost 3.5 million reviews and an overall rating of 4.6 stars and over 100 million downloads, Turbo VPN is by far the most popular VPN when it comes to Android devices.

Second-place Hotspot Shield has less than half the number of reviews and an overall rating of 4.1 but the same approximate number of downloads. This would suggest that even though a similar number of people have downloaded these two VPNs, Turbo VPN is more popular with users.

Hola VPN, Psiphon, and Betternet also enjoy a large number of downloads (over 50 million) and similar ratings (4.3 or 4.5 stars).

But if we look at the Apple App Store’s ratings, there is quite a different picture.

Overall, Turbo VPN would appear to be the most popular across the two platforms but NordVPN and ExpressVPN are clear favorites for Apple users.

Which VPNs dominate the market?

Within each of the above categories, we had some clear winners.

For monthly searches, NordVPN wins by a good margin. It was also the most “trendy” VPN according to Google Trends from throughout 2019. But when it came to social followings, NordVPN dropped in the rankings and was replaced with the likes of Hotspot Shield and Private Internet Access. It also lost out to ExpressVPN when it came to website visits.

Finally, NordVPN and ExpressVPN appear the most popular choice for Apple users, but Turbo VPN stormed ahead as the clear favorite for Android Users (and was another VPN with clear peaks in interest on Google Trends).

Overall, then, NordVPN and ExpressVPN continue to hold a large share of the market but they are sharing this with the likes of Turbo VPN and Hotspot Shield, which also have huge followings. Out of these four, Turbo VPN is the only free service.

We used Ahrefs to find the total monthly searches for each VPN, using the top 20 of these for the basis of our report. The figures are derived from Ahrefs’ own database and are based on the number of times each keyword has been searched globally on Google.

We used Google Trends to see which of the VPNs were trending most on Google over the past year. We compared each of the top 20 against one another to find the top 5.

Google Trends works by taking the total number of searches for a keyword and how these change with geography and time. This gives you the “interest over time” graph which shows how keyword search volumes change within a certain period. We used the entire year of 2019 and worldwide searches.

SimilarWeb has a number of data sources and uses all of its aggregated data to create algorithms that offer estimated figures for things like the number of website visits.

Opera VPN and Avast VPN were omitted from the study due to their parent companies offering more than one service. Due to this, it wouldn’t be fair to compare their website visits, social followings, etc. to companies only offering VPNs.