Hackers attack 70 times per minute: what happens when a computer is left unsecured on the internet

Comparitech researchers set up honeypots on the web to lure in attackers and record their actions. We recorded more than 100,000 attacks in 24 hours.
Paul Bischoff TECH WRITER, PRIVACY ADVOCATE AND VPN EXPERT

Every device connected to the internet has a unique IP address. Those IP addresses are public, and they allow computers to find and communicate with each other via the Internet Protocol. Normally, we want to allow legitimate parties to connect to our IP addresses, and keep out adversaries by using firewalls, authentication, and access control.

But what if we didn’t take any of those precautions? How long would it take for malicious hackers to find and attack your device? What methods would they use? What do they seek? And where do they come from?

Comparitech researchers sought to find the answers to these questions by setting up honeypots—dummy computers designed to lure in attackers so we can record their every step.

Researchers set up honeypot devices emulating a range of internet-accessible services and supporting a wide range of protocols including RDP, SSH, MySQL, VNC, and more. The honeypots were left unsecured so that no authentication was required to access and attack it. Using this method, Comparitech researchers sought to find out which types of attacks would occur, at what frequency, and where they come from.

In total, our researchers 101,545 attacks in a 24-hour period, or 70 attacks per minute. To give you some idea of how much attacks have increased, a 2007 University of Maryland study recorded a mere 2,244 attacks per day, a fraction of what we recorded in 2021.

Brute force SSH attacks were by far and away the most common against our honeypot. SSH, or Secure Shell, is an encrypted protocol used to remotely access computers, manage servers, and execute scripts. It makes sense that this would be the most common type of attack because almost every device supports SSH in some way or another.

Brute force attacks attempt to guess the username and password for SSH access to the server. You can see which usernames and passwords were most frequently guessed in the word clouds below:

Here’s a breakdown of the top attack types recorded on our honeypot:

What were attackers after?

When attackers accessed our systems through SSH, most started out by trying to reveal basic information about the system. Here are the top 10 commands used by attackers recorded by our honeypot: 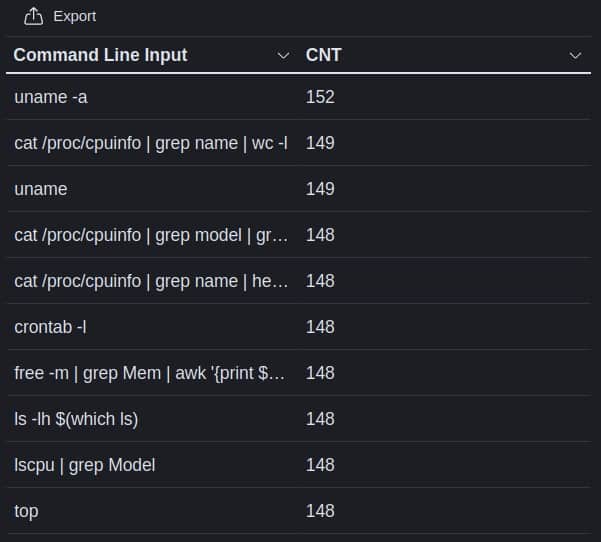 From there, attackers would presumably launch further attacks based on what they find. If they find an unpatched version of some software with a security vulnerability, they would then take steps to exploit that vulnerability, for example. If they find a database, they would then start exfiltrating data. Or they could plant ransomware, a cryptominer, or a range of other malware.

Researchers also noted attackers attempting to examine crontab, a task scheduling system on Unix systems. They were most likely searching for backup directories, system utilities, and installed software. Others were interested in CPU stats and running processes to see what was installed on the honeypot.

About 98 percent of the attackers’ originating IP addresses were already in publicly-available blacklists. We recorded attempts at unauthorized access from bots and crawlers (3), mass scanners (85), Tor exit nodes (101), and some disreputable IPs flagged by our monitoring tool (614).

About two-thirds of the attacks came from unknown operating systems, which includes Macs among others. Of those we do know, 9.5% came from Windows devices, and 17.5% came from Linux devices.

Tracing an attack back to a specific country is a bit dubious, as many, if not most, attackers will use proxies to hide themselves. That being said, here’s the breakdown of attackers’ originating IPs by country:

Comparitech researchers attempted to answer this question by disguising the honeypot as different operating systems including Windows, MacOS and Linux.

They did not record any significant difference in the number of attacks targeting a particular operating system.

That being said, researchers admit that attackers might be too smart for their ploy. Our researchers disguised the Linux honeypot as another operating system by changing the default TTL value, a parameter by which most automated scanners determine which OS and version is installed. But some scanners can see past this trick.

Furthermore, many of the services and protocols enabled on our honeypot are OS-agnostic, meaning they work on any operating system and are viewed equally by attackers regardless of the underlying operating system.

Comparitech researchers relied on T-Pot for much of this experiment. T-Pot is an open-source suite of tools used for honeypot monitoring, including:

Those tools allowed our researchers to monitor the following honeypot services and protocols: