Unless you’ve been avoiding the constant political talk as of late, you are likely aware of the perpetual investigation of the 2016 U.S. presidential election and potential interference by Russian hackers. Even if you have been keeping up, the endless headlines and constant investigation turns can get confusing.

With the interference of previous campaigns and ongoing threats to the election process, we were interested to see how many Americans understand election cyberattacks in terms of how it is done or how it can be prevented. We surveyed over 1,000 people about their opinions on the biggest threats to one of our most fundamental rights. Continue reading to see what we learned.

Security Democrats Had the Largest Increase in Confidence in Future Elections After the 2018 Midterm Elections.

Election hacking didn’t stop after the 2016 election, with numerous threats to the midterm elections in 2018. While Russian interference and hacking weren’t as bad in 2018 as in 2016, are Americans at ease about the possible future of election hacking?

Before the 2018 midterm elections, 57 percent of Democrats were not at all confident the U.S. would be ready to combat cyberattacks during the 2020 presidential election, but 76 percent of Republicans were at least slightly confident in the country’s defense. However, confidence levels changed significantly after the 2018 midterm elections, likely due to the preparations many states took to protect the integrity of the results. The percentage of Democrats that said that they were at least slightly confident in the United States’ readiness for the next presidential election rose by 15 percentage points. Although not as drastic, Independents and Republicans also saw a change, with a 15 and 9 percent increase in confidence, respectively. Republicans were already the most confident before the 2018 midterms, which may explain why such a small change in confidence. 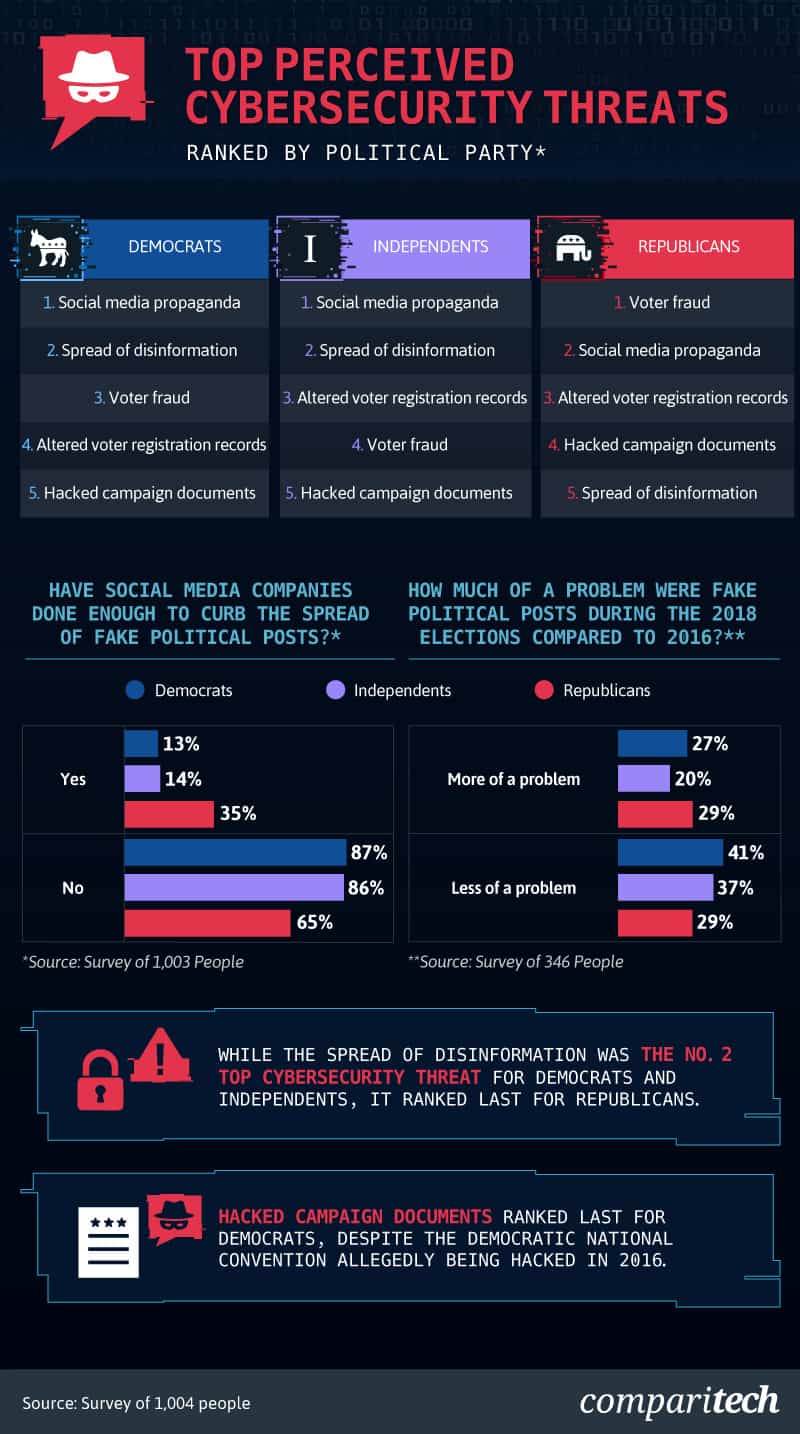 Despite winning the election, Donald Trump was quick to speak of voter fraud repeatedly during the 2016 race. While these claims had no foundation, voter fraud remains Republicans’ top cybersecurity threat. Republican concern of voter fraud carried over to the 2018 midterm elections, even before some of their candidates’ losses loomed.

Interestingly, the spread of disinformation was the second most important cybersecurity threat for Democrats and Independents but was last on the list for Republicans. Hacked campaign documents were ranked last by Democrats, even though the Democratic National Convention was hacked in 2016.

83 Percent of Respondents Said Facebook Is the Social Network Most Associated With Fake Political Posts. 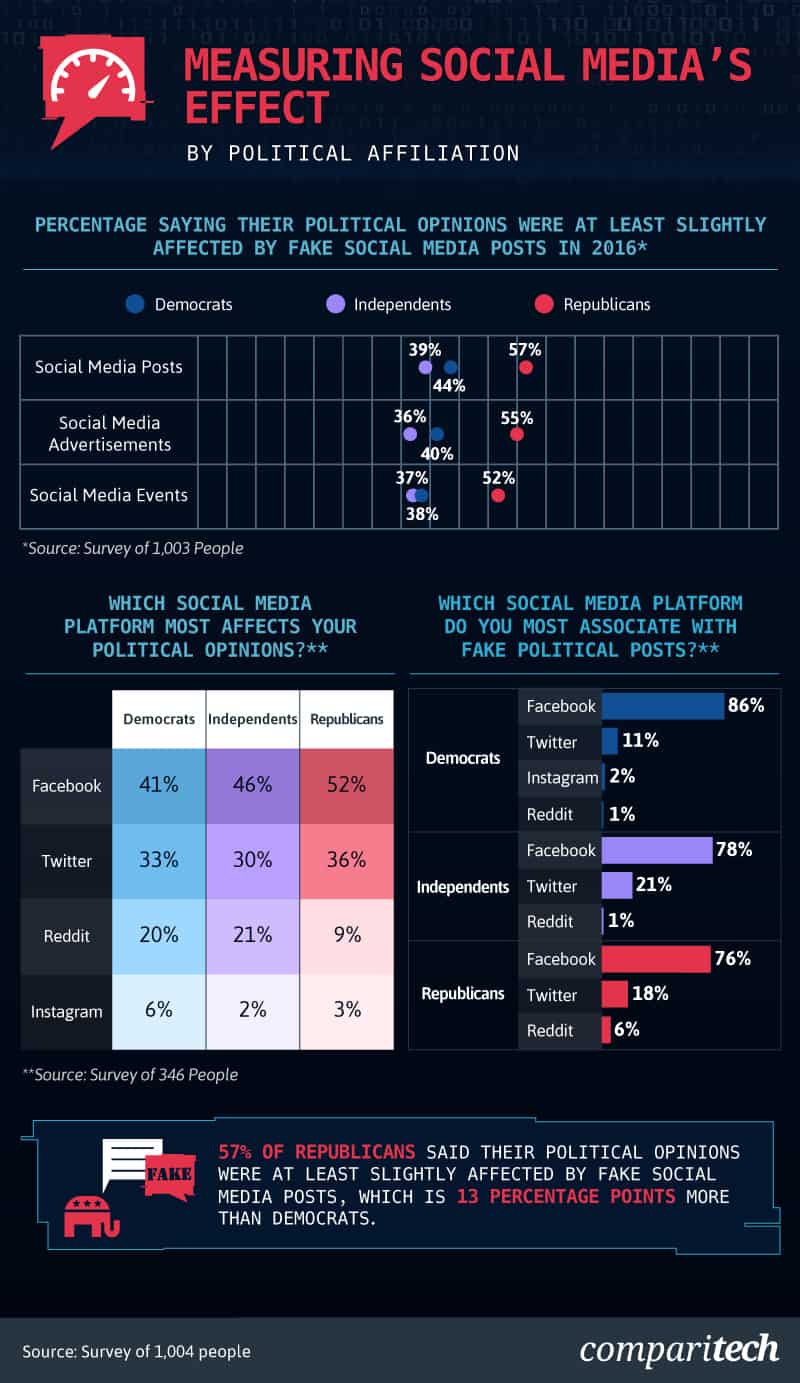 Even with fake political posts circulating the web, how many voters are influenced by social media when it comes to politics? Over 40 percent of Democrats, Independents, and Republicans admitted Facebook influenced their political opinions, with Twitter being the next most influential platform. Facebook also happens to be the platform most associated with fake political posts according to all parties. Eighty-six percent of Democrats associated the two, and 76 percent of Republicans said the same.

Republicans Are the Most Likely to Say That They Are Very or Extremely Confident That They Can Spot Fake Political Posts on Social Media. 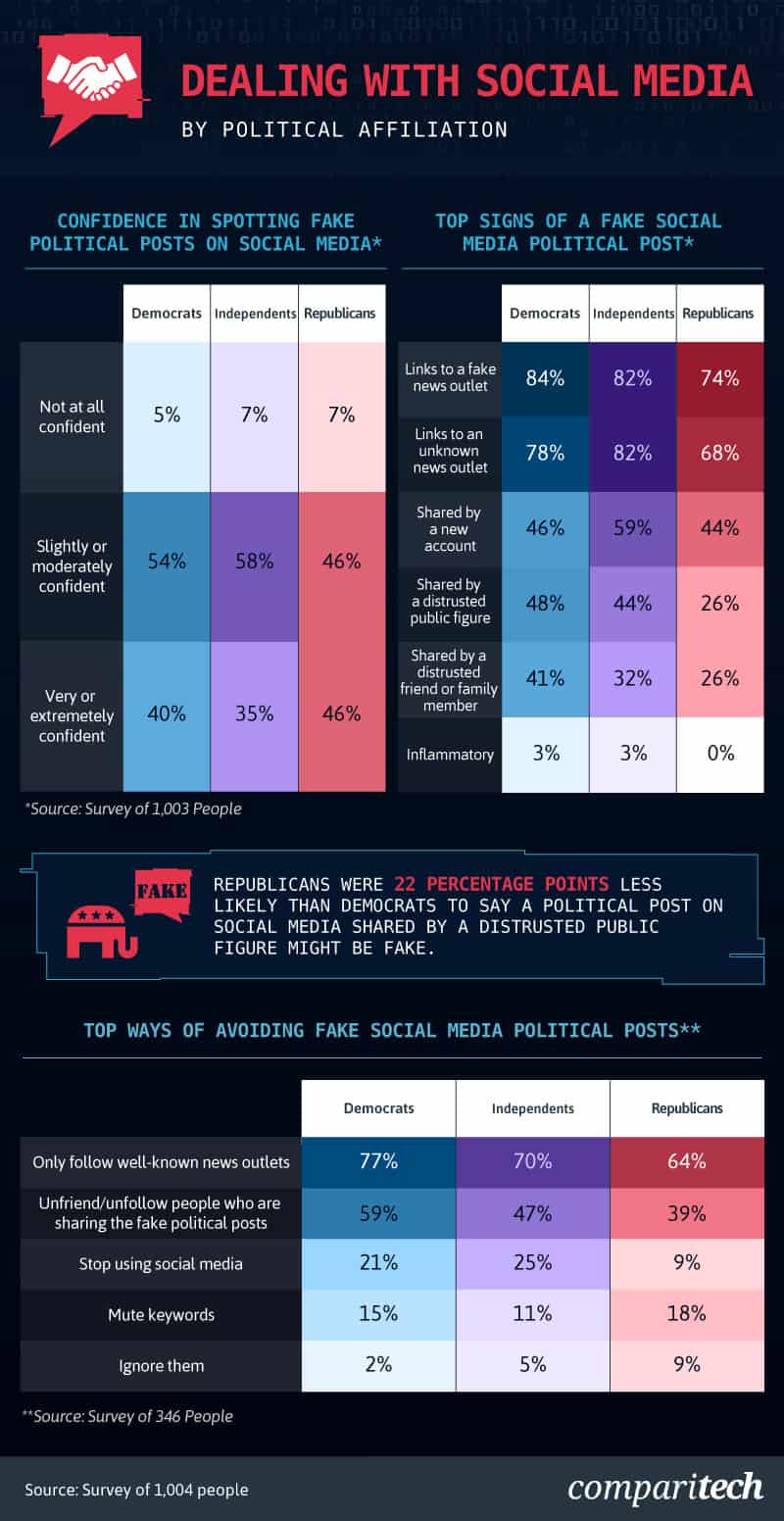 Fake posts haven’t discouraged people from using social media. It seems only to have increased their confidence in spotting fake news and disregarding it. A majority of all three party supporters were at least slightly confident in spotting fake political posts on social media, with only 5 percent of Democrats and 7 percent each of Independents and Republicans reporting no confidence at all.

Supporters of all three major parties agreed the top two signs of a fake post were a link back to a fake news outlet or a link to an unknown news outlet. A post being shared by a distrusted public figure was also seen as a warning sign for fake posts, but Republicans were 22 percentage points less likely than Democrats to say so.

Detecting fake news or social media posts has been talked about a lot, even leading researchers to develop algorithms for technological help in finding the truth. But there are steps social media and news consumers can take to identify fake posts.

96 Percent of Respondents Say That They Understood the Cyberattacks on the 2016 Election. 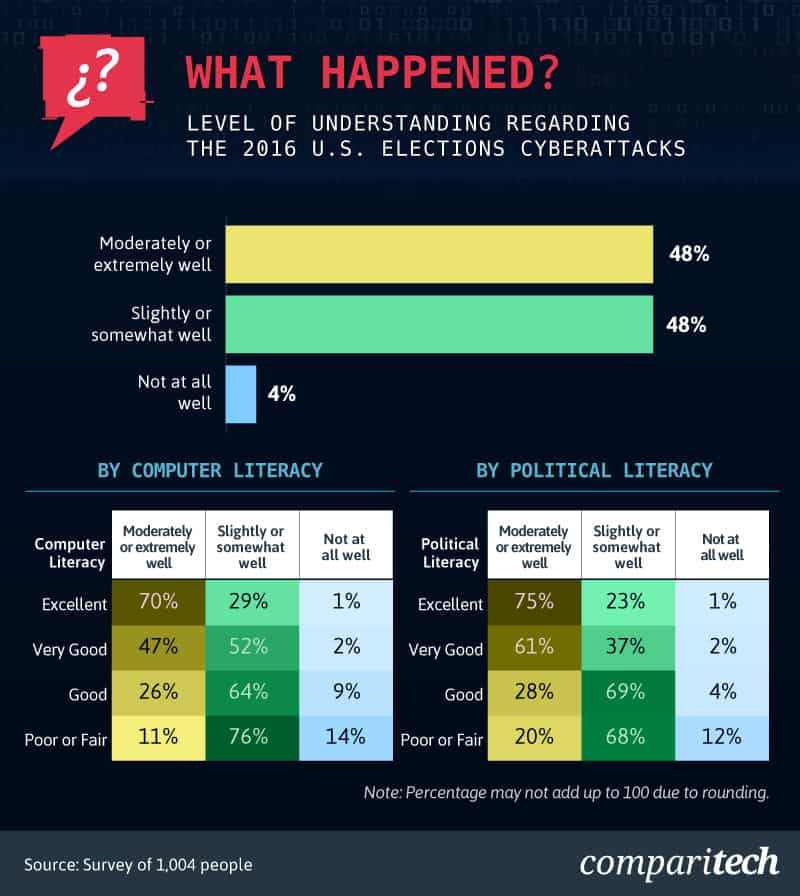 Slightly more than 96 percent of respondents said they at least somewhat or moderately understood the cyberattacks that occurred during the 2016 presidential election, with only 3.5 percent not understanding it at all. As it turned out, understanding was tied to both computer and political literacy (understanding basic government functions).

It’s been years of nonstop talk of election hacking and continuous threats to future elections, but with the steps that states are taking to protect integrity, the American public is becoming more and more confident in the country’s defense. Social media played a major role in previous elections through fake political posts, heavily influencing some voters’ political opinions. Despite the increased confidence, however, the American people think social media platforms need to step up security to weed out fake posts.

We surveyed 1,004 respondents who said they at least slightly believed the 2016 U.S. presidential election was hacked or was under cyberattack. We executed the survey using Amazon’s Mechanical Turk platform.

The second survey had 346 of the original 1,004 people retake the survey with several additional questions seven days after the 2018 U.S. midterm elections. Sixty percent of the respondents said they were Democrats, 27 percent were Independents, 10 percent were Republicans, 2 percent were Libertarians, and 1 percent said that they were a part of the Green Party.

The data used across these graphics depend on self-reported memory from the 2016 U.S. presidential election. There are certain challenges that come along with self-reported data, including selective memory, exaggeration, telescoping, and attribution. Being “affected” by the cyberattacks on U.S. elections has a broad definition. To be affected, you could have personally been affected by the cyberattacks, in that your beliefs changed. Or, in another sense, because others’ beliefs were changed and, therefore, affected the outcome of the election, the government affects you.

Because we couldn’t have every respondent from our original survey take our supplemental survey, we only had about 30 percent take the second one.

There are a lot of fake political posts on social media, but not enough posts talking about those fake posts. How about sharing this one? It’s totally fine if you do so for noncommercial use. Just make sure to link back to this full article.