Should Partners Be Privy to Passwords?

To discover how romantic partnerships can (and do) impact how we use social media, we set out to see if partners trusted one another with something that most people hold very close to the heart: the passwords to their personal social media accounts. What do we find when we look at the dynamics of couples and how they approach social media?

Who Shares Their Social Media? 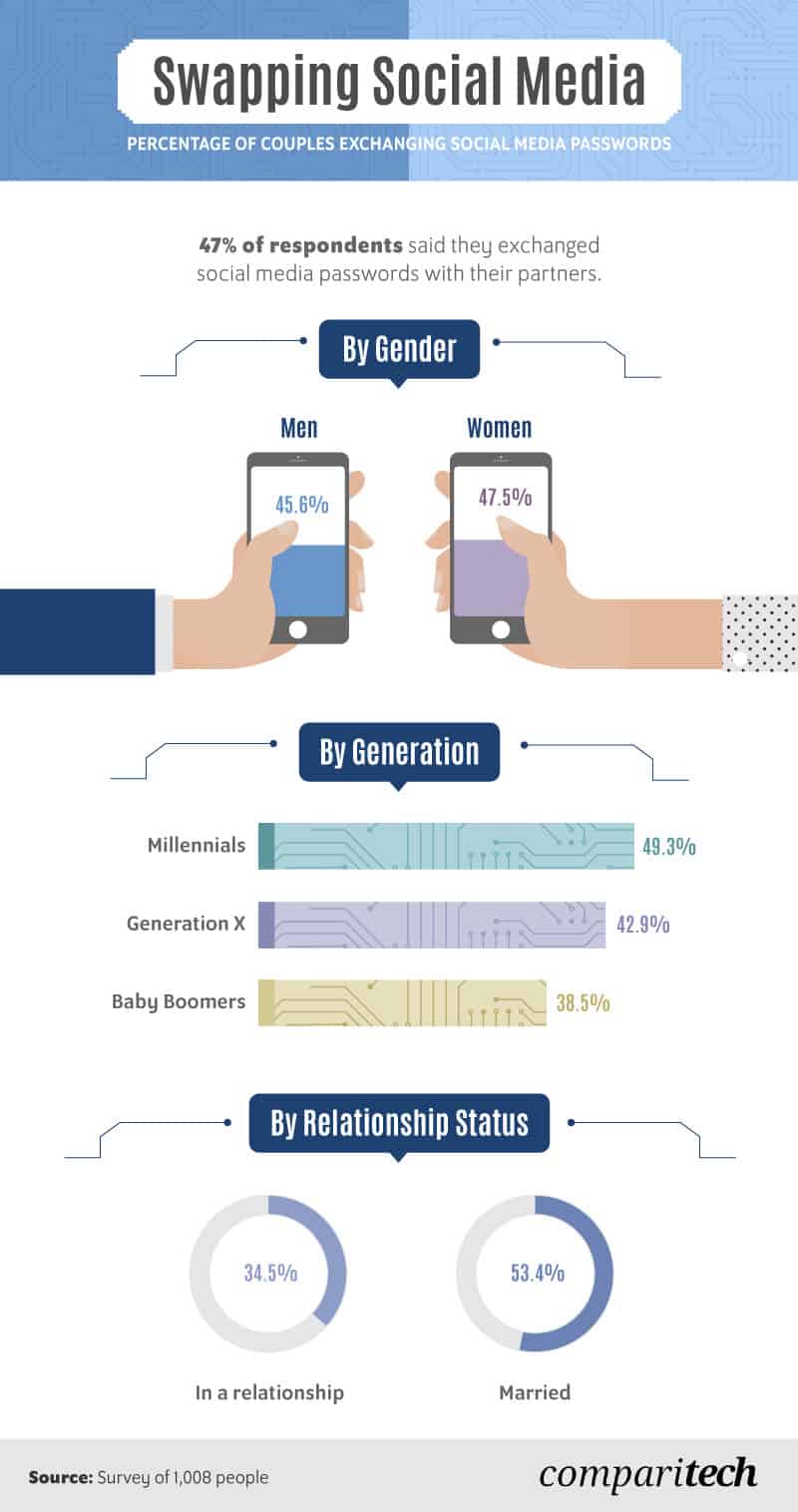 We segmented this finding down by generation as well. Millennials were the most likely to share their passwords at a little over 49 percent, with Gen Xers just a bit behind them at nearly 43 percent and baby boomers at over 38 percent. Millennials likely make up the most significant percentage here because they experienced the boom of personal technology and have spent a big chunk of their lives enjoying computers, cellphones, and social media. They may, then, be a little more comfortable sharing passwords with their significant others because they’ve had their fingers on technology since they were young.

Married couples were also more likely to share passwords than their unmarried counterparts – roughly 53 percent of married people shared their passwords, while over 34 percent of those in a relationship (but not married) felt comfortable doing so.

Next, we asked people why they chose to share their social media passwords with their partners. The most common reason for both men and women was because they felt they had nothing to hide on their social media accounts. The next reason was for convenience – which may have something to do with retrieving information or posting on each other’s behalf. Others shared their passwords because they were sure their partners would definitely not use their accounts without permission. 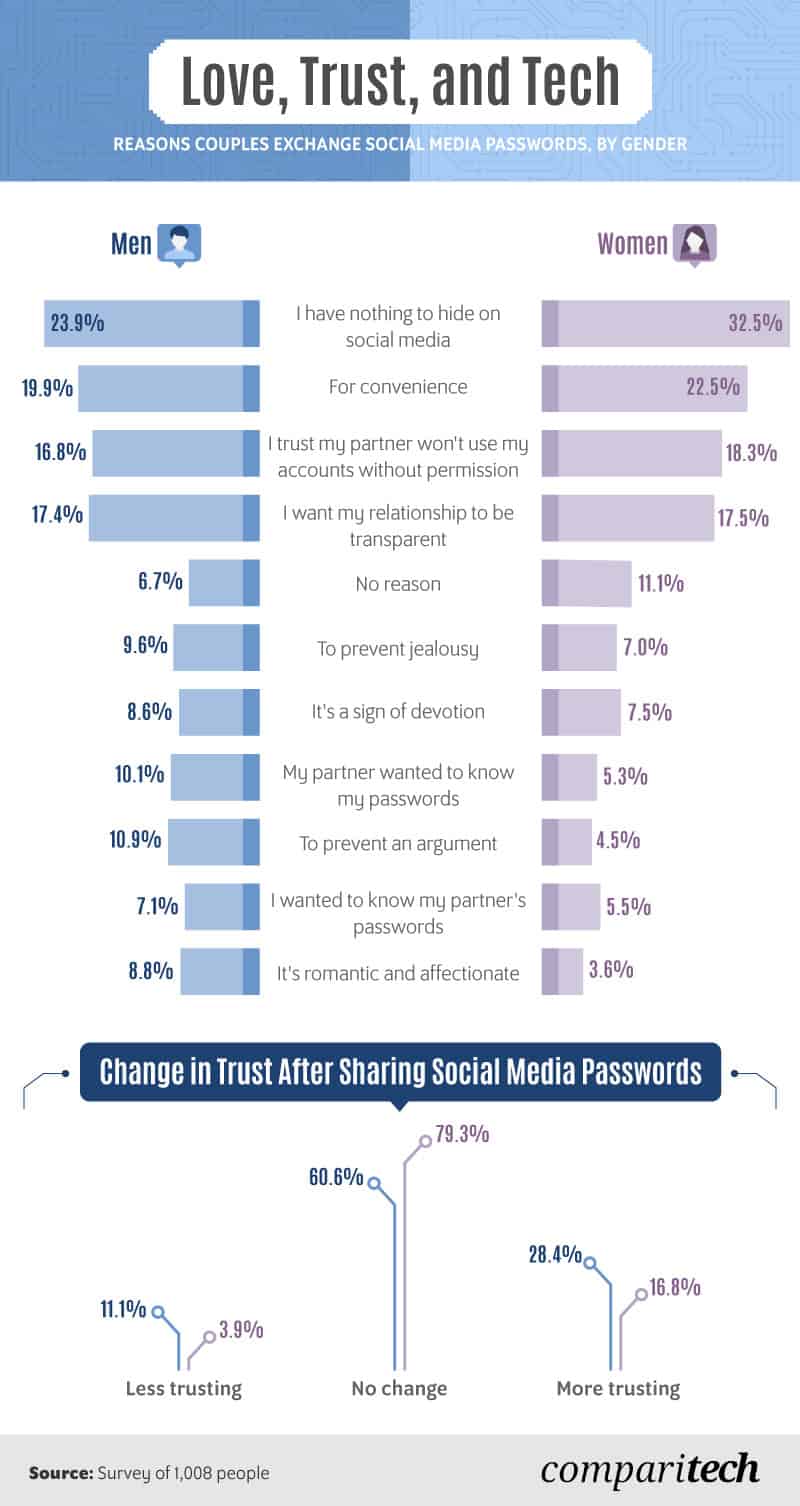 We also checked to see if there was any change in trust after social media passwords were exchanged. While most respondents (both male and female) reported their trust remained the same, more men than women found they were less trusting after they exchanged passwords with their significant other. And possibly for a good reason: sharing a password did not always mean permission to snoop through DMs or check out social media activity. More men than women were also more trusting after exchanging passwords with their significant other, perhaps because consenting to sharing something personal created a sense of transparency.

The most commonly shared account passwords were for video streaming services like Netflix, Hulu, or HBO Now. This could be because there’s not much privacy to invade on these types of media platforms (unless you spend your time streaming stuff your partner might think is strange). It’s also common for families to have a single account with multiple profiles, especially on Netflix, which tracks usage, sets up recommendations, and keeps track of personal history. 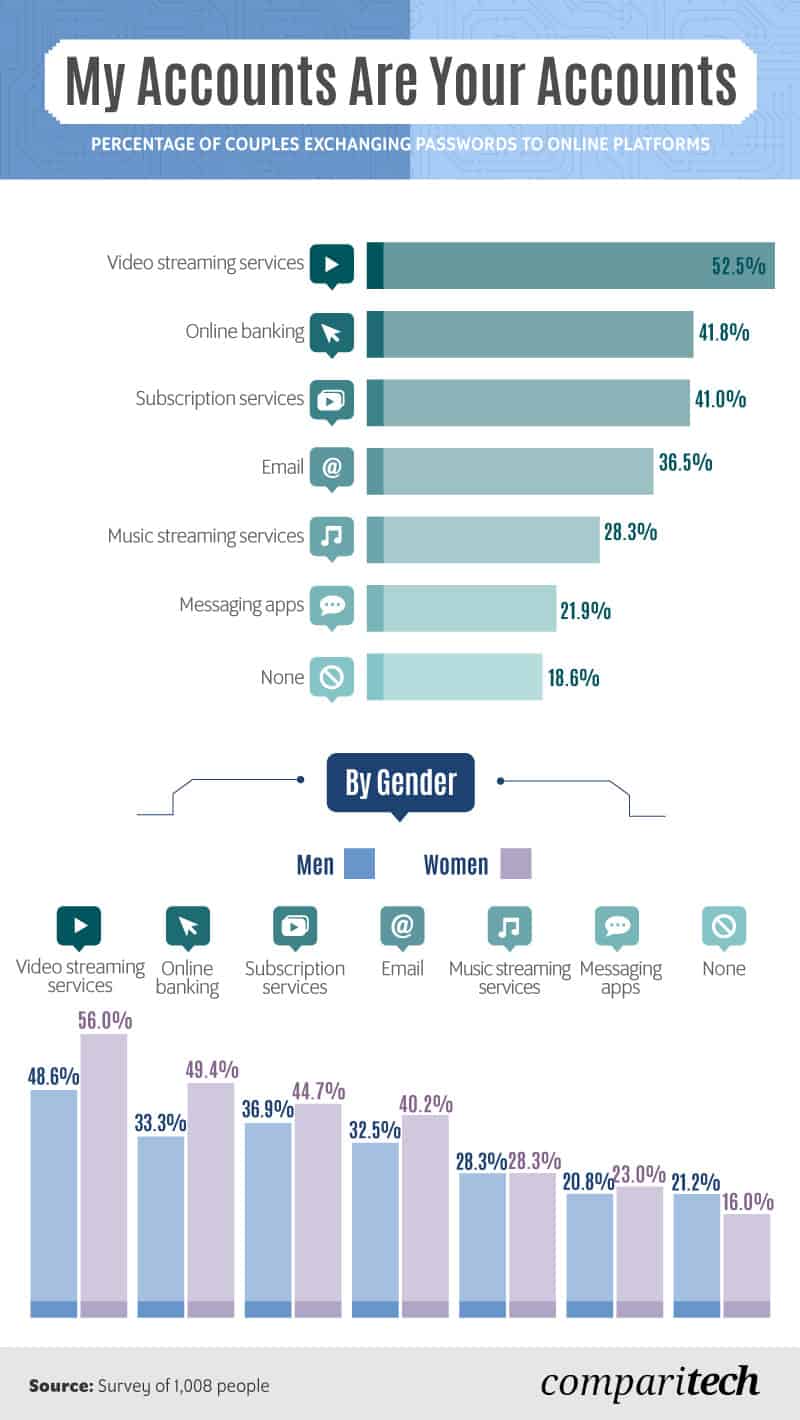 The least commonly shared passwords were for messaging apps, including iMessage, WhatsApp, and Facebook Messenger. Usually, these types of accounts are private and can contain personal correspondence. Less than 22 percent of respondents said they exchanged their passwords to these accounts.

Down the line, women were more apt than men to share passwords for various accounts (except for music streaming services, which were equal for both genders). Men were more likely than women to not share anything at all.

Reasons for Not Sharing 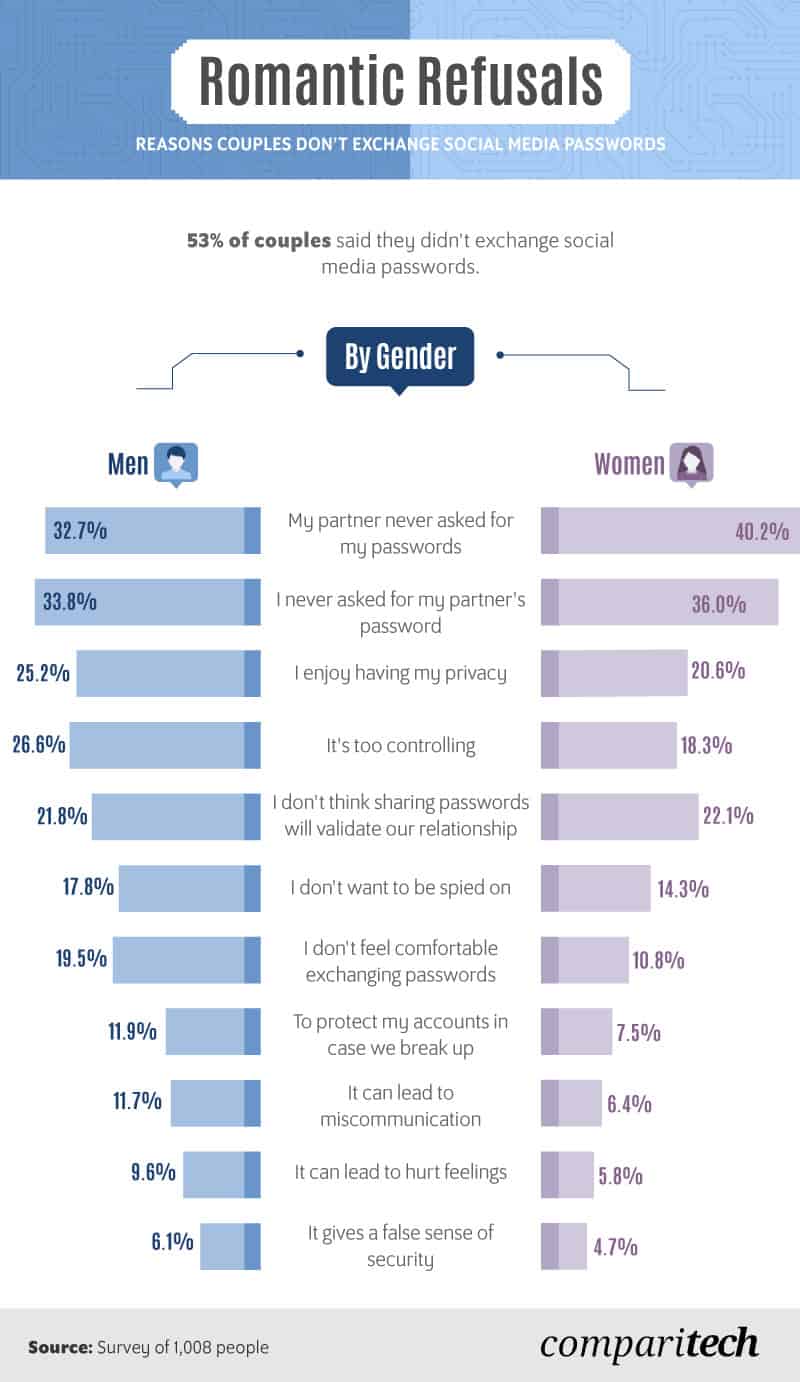 Still, others enjoyed having privacy (men more so than women), but men felt that sharing passwords was a bit too controlling. Men were also more likely to say they didn’t feel comfortable handing over their passwords (over 19 percent versus nearly 11 percent of women). 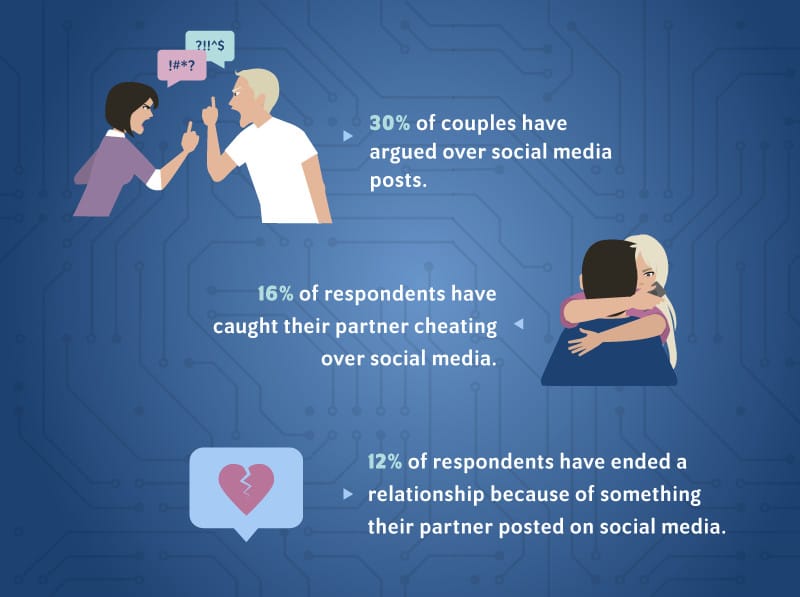 Changing Passwords After a Breakup

Finally, we checked with divorced and separated respondents to see if their social media security habits changed post-breakup. Most people (89 percent) changed their passwords once the relationship ended, but there were still quite a few who remembered their ex-partner’s passwords (18 percent). 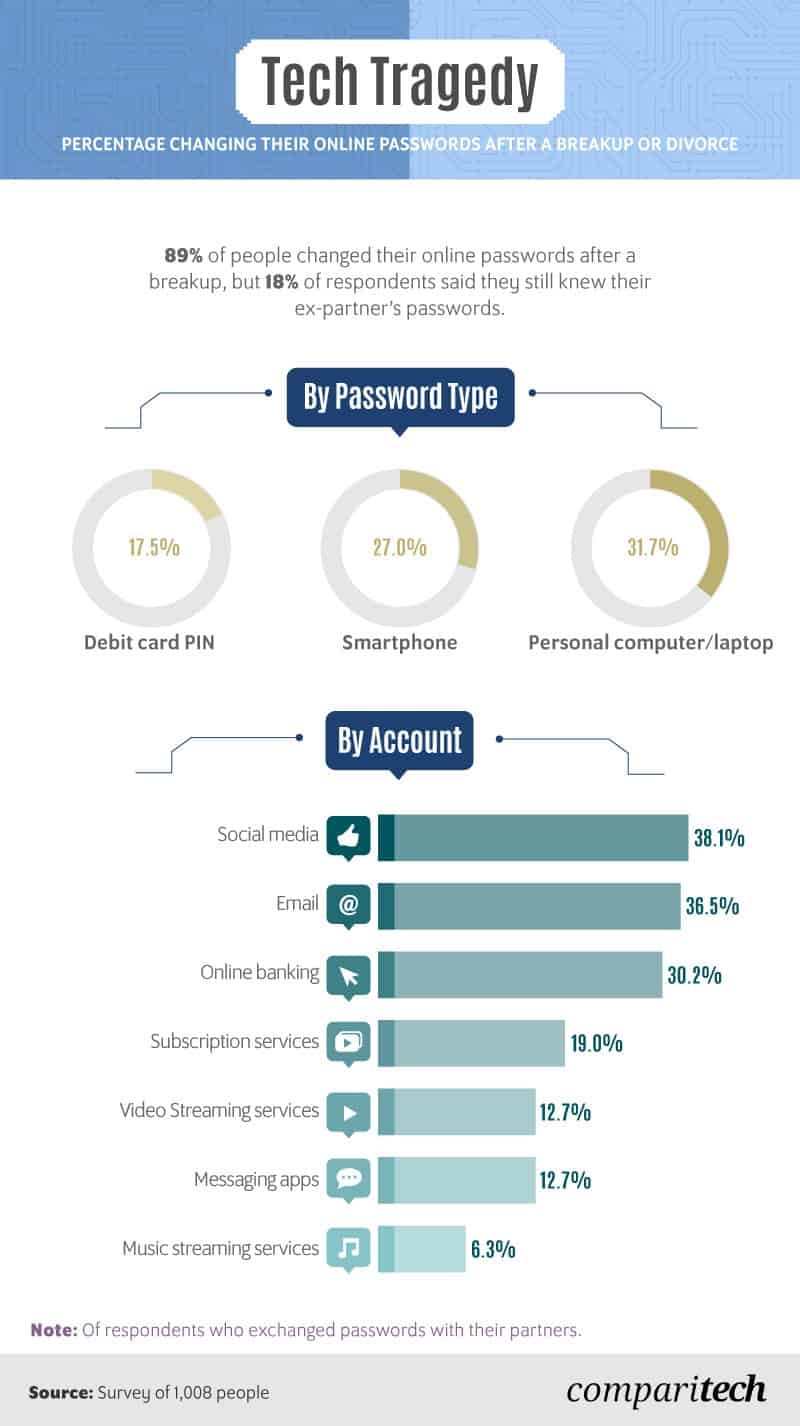 Social media platforms were the most likely to see password changes (38 percent), but ex-partners often continued to share video streaming services (only around 13 percent of respondents changed their passwords for these after a breakup, perhaps because there’s not a ton of privacy to be peeped).

Social media has a large presence in all aspects of our lives, but when it intersects with romantic relationships, sticky situations can come out of shared passwords. There may be less sharing going on than we think, as people often want to keep some parts of their lives just to themselves.

While password sharing may be an issue (or nonissue) in your relationship, so much of our lives are online these days – from social media to video streaming and online banking. Sharing a password means placing a lot of trust in another person, but it’s important to keep in mind that a misused password can result in more than just relationship problems; it can also bring financial problems if someone accesses your bank account or credit card information.

Comparitech helps consumers make quality decisions when they subscribe to technology services, including VPNs and password managers, so visit us today as you work toward keeping your online account information safe.

For this study, our team administered online surveys targeting people who were either in a relationship, married, divorced, or separated. If respondents identified as single or failed to answer an attention-check question correctly, they were excluded from our findings. Respondents were presented a different set of questions depending on if they exchanged passwords with their partner. To determine the change in trust after exchanging passwords with a partner, respondents rated the level of trust in their relationship before exchanging passwords and then again after passwords were exchanged. Participants were presented with the following scale for both questions:

Following this order, our team was able to determine if exchanging passwords resulted in less trust, more trust, or the same level of trust in their relationship. For instance, if a respondent rated their relationship as “extremely trusting” before exchanging passwords, but “very trusting” afterward, this was categorized as “less trusting,” while still maintaining a positive level of trust in the relationship.

Keeping your social media password a secret is always a good idea, but if you’re keen to share our findings, share away for noncommercial distribution – just make sure you link back to this project so that our contributors receive the credit they deserve.