Passports on the dark web: how much is yours worth? 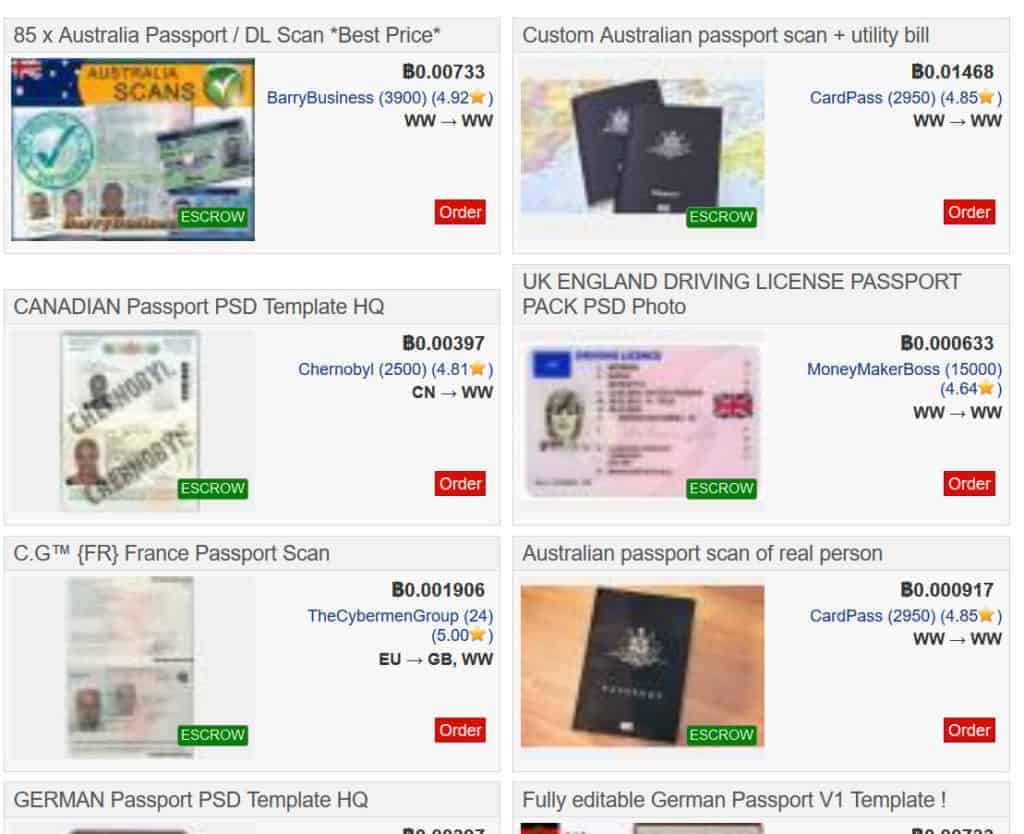 How much is a scan of your passport worth to a cybercriminal?

In late September 2018, Comparitech searched listings on several illicit marketplaces to find out how much passports are worth on the dark web. Those black markets include Dream Market, Berlusconi Market, Wall Street Market, and Tochka Free Market.

This a typical listing for a passport scan that includes a selfie: 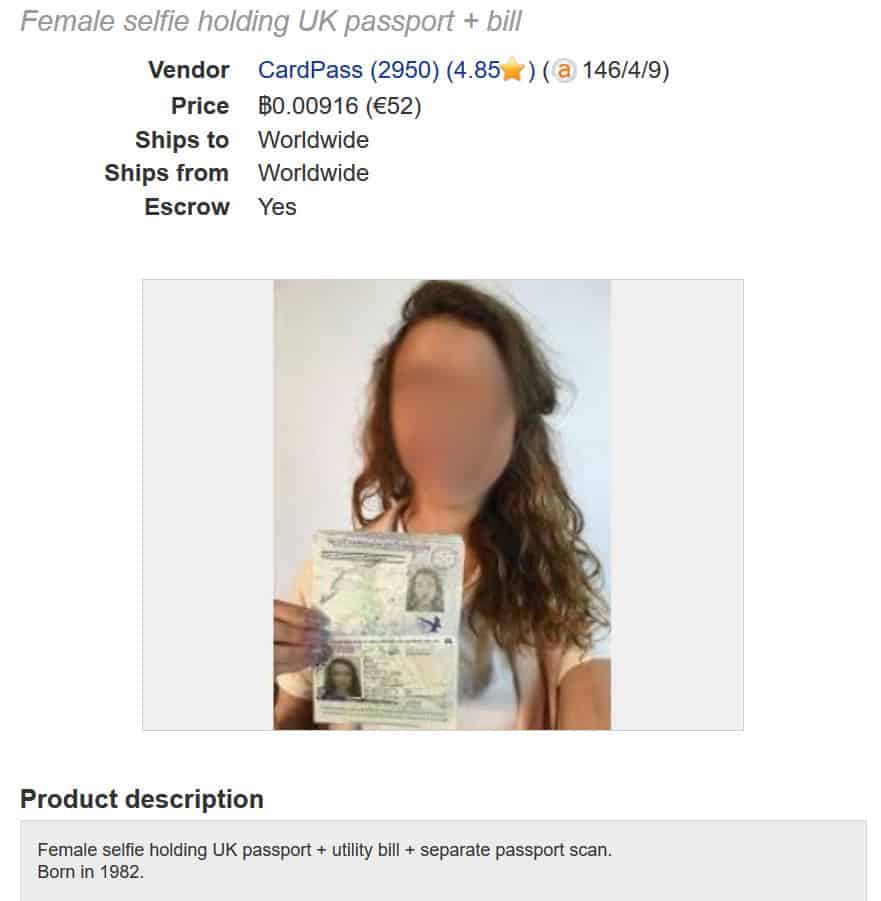 Passport scans, be they forged or real, are often accompanied by other forms of identification, typically a utility bill, selfie of the ID card owner holding up their ID, and/or a driver’s license. These add-ons are reflected in the price—they cost significantly more than just a digital scan. The reason for this is because multiple forms of ID are usually required to pass proof-of-address and proof-of-identification checks on websites. These checks are often part of the account recovery process in which a user has somehow lost access to their account and must prove who they are to regain access.

The bulk of our analysis focused on digital scans and images of real passports. In total, we found 48 unique listings for real passports scans, 38 of which were not sold with any accompanying proof of ID or address. Those 48 spanned 20 countries, the prices of which you can view in this table:

Australia and UK passport scans were the most frequently listed, and Australian scans were the most expensive on average (US$32). We found no consistent pattern to the prices according to country; they did not seem to be based on scarcity or the power of the country’s passport. A wide range of vendors sell passport scans, but a small handful seem to specialize in them.

Types of passports for sale on the dark web 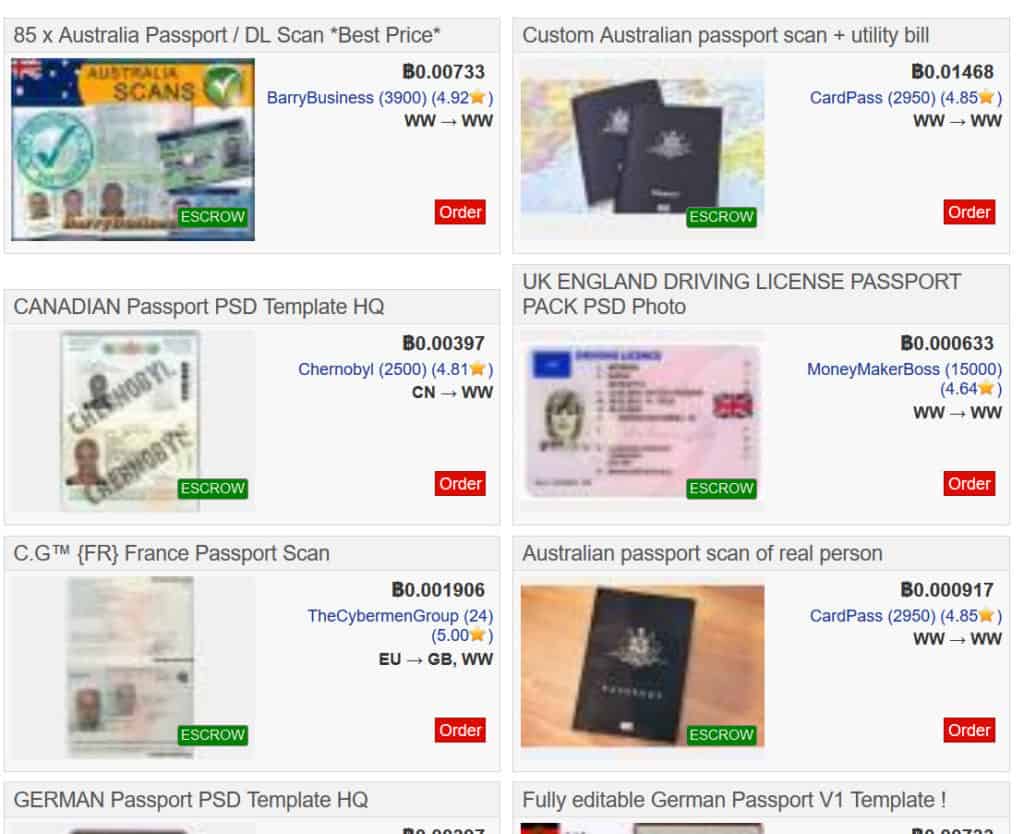 Passports sold on the dark web come in a few forms:

All of these are sold on the dark web for cryptocurrency, typically Bitcoin or Monero. The prices in the table were accessed and converted to US dollars on September 24 and 25, 2018.

How do criminals use passport scans?

Some of the most common targets for criminals who purchase passport scans include cryptocurrency exchanges, payment systems, and betting websites. 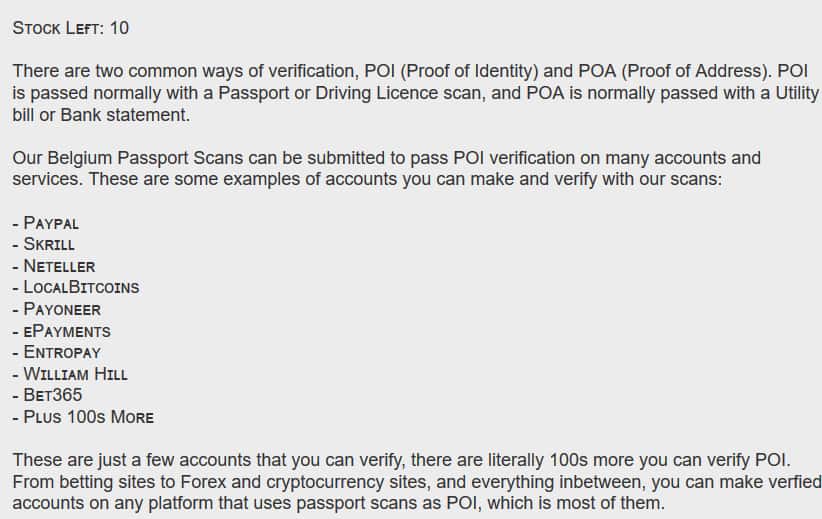 While a company may be referred to in a marketplace listing, it does not necessarily imply that it is vulnerable or that accounts have been compromised.

Some banks and other financial institutions only require two pieces of identification to open a new account. With a stolen passport and driver’s license, for example, fraudsters can open accounts and collect the signup rewards in the victim’s name, or use the account as a mule to cash out on other illegal transactions. This is called a “bank drop” scam, and it can implicate the victim in other crimes.

We surmise that real scans are more effective than Photoshopped counterfeits for bank drop scams.

In this scam, hackers use impersonation and social engineering to bypass two-factor authentication and abuse the account recovery process used on many sites. Account recovery often requires scanning or taking a photo of a physical ID, such as a passport.

Scammers can modify ID scans to impersonate account holders on a number of websites that require photo ID for account verification and recovery.

Many black market vendors offer to alter the information shown in these documents, scans, and selfies to match whatever name and other details are provided by the buyer. The buyer can sometimes request passports of people with a certain sex, hair color, skin color, eye color, and approximate date of birth.

When using Photoshop templates, criminals simply enter in the info they want and drop in their own photo. Passport numbers are sequential and thus not hard to guess a legitimate one, and most companies who request proof of ID won’t actually verify whether the passport number matches the passport holder. 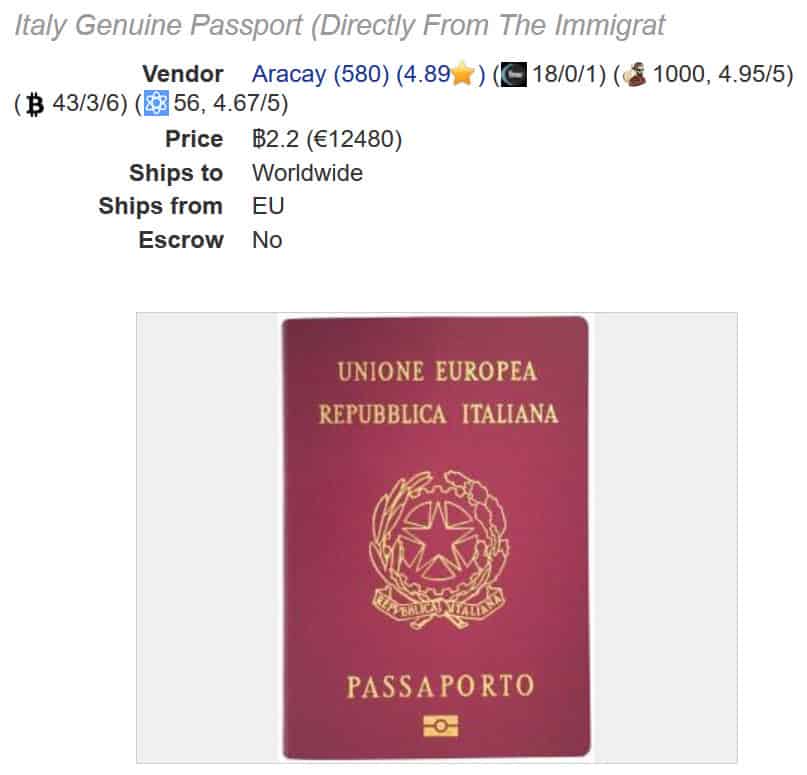 Authentic, state-issued passports are hard to come by and cost a lot, ranging from $8,216 (Germany) to $17,116 (UK). The average price of the eight supposedly genuine passports was $13,567. At least one vendor claims these passports came from “our corrupt immigration police contacts,” though we have no way of verifying this. In many cases buyers are given the option to specify what details are included in the passport, including stamps for specific countries.

Forgeries cost about one-tenth of the price, but they still cost in excess of $1,000. The average price of the six vendors selling forgeries was $1,478. Buyers submit the information and headshot to be used in the counterfeit when making the purchase.


How to protect your passport

Protecting your passport is difficult because travelers are required to show them on so many occasions while traveling. Passports are required at immigration checkpoints, hotel check-ins, and when applying to jobs and schools abroad. Passports are often scanned and stored on computers that may not be sufficiently secure. Someone with access to those scans might be fencing them on the dark web. It’s easy to imagine a receptionist at a cheap hostel flipping scans of their clientele on the dark web for some pocket cash.

You should do what you can to protect your passport so it’s not abused by criminals. Here are a few tips:

At times, it’s difficult to distinguish between a listing for a photoshopped scan and a real scan. We tried to only include real scans in the table above.

Passport scans are a lot cheaper if you buy in bulk, but there’s no guarantee those scans haven’t been used before, that the information in them hasn’t expired, or that they aren’t Photoshopped forgeries. Some of the listings look like duplicates from different vendors, suggesting multiple vendors might be selling the same scans. We tried to avoid listing duplicates in the table above.

While it’s always possible that some listings are scams, all of the vendors whose products we included in our analysis had positive buyer feedback.

All of the marketplaces we searched use English as their primary language. Marketplaces in other languages, such as Russian, could well produce different results.

A 2014 study revealed a 15 percent error rate in matching the person to the passport photo they were displaying among passport-issuing immigration officials in Australia.

There’s no shortage of fake ID generator apps on the web that don’t require buying stolen scans off the dark web, but we’re not sure how they compare in terms of quality, customization, and accuracy.

Images redacted by Comparitech. We reached out to some of the supposedly vulnerable companies mentioned in the listings and will update this article if we hear back.