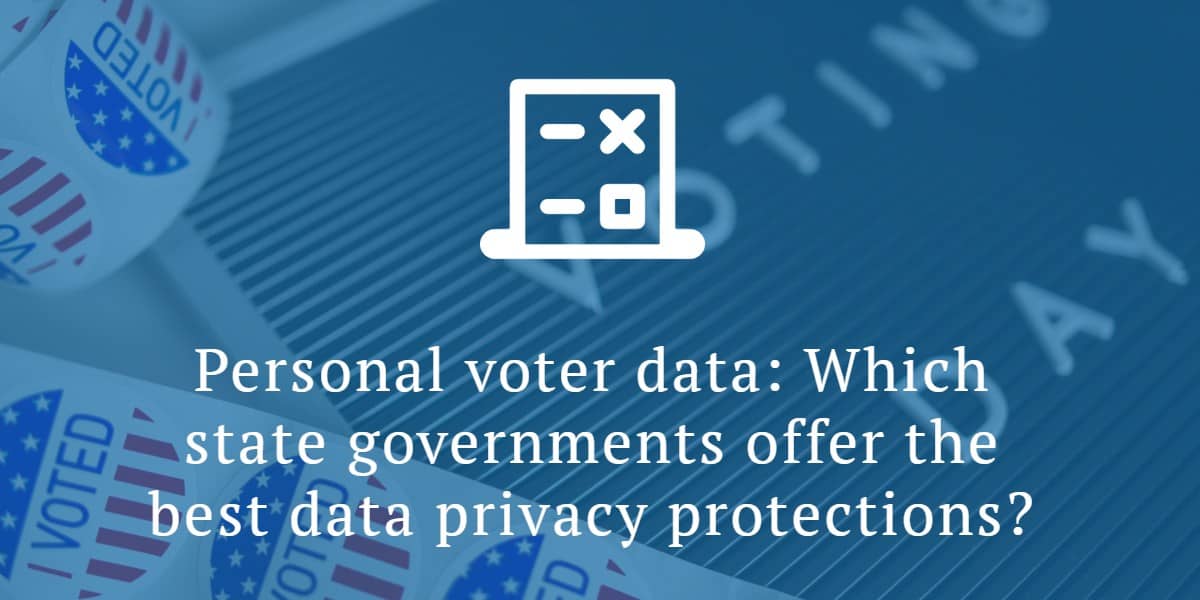 In the United States, each state government holds records on its voters. The type of information that’s deemed “non-confidential” and who has access to this data differs by state. Some only distribute names and addresses to political parties on a strict non-commercial basis. Others publish voter lists online so anyone (even those outside the US) can access the data.

Yet, when “hackers” get their hands on this data, there’s uproar. Recent examples include Michigan voter information being for sale on the Dark Web (authorities insisted this data wasn’t hacked, though, as the data is freely available to anyone through a Freedom of Information request), and the infamous Russian hack on election databases in 2016.

Should we be looking closer at the states that aren’t doing enough to protect the privacy of their voters’ personal data, rather than the hackers who are accessing what’s mostly available already?

Our team of researchers has been through each state’s voter registration legislation, voter list request processes, and cybersecurity standards to find out which states have the best privacy protections for their voters.

Please note: we have scored states from a privacy protection standpoint only. For example, while high fees to access voter records may be deemed to obstruct transparency, from a privacy standpoint, such fees reduce widespread access to the data. Likewise, automatic voter registration improves voter participation, but could negatively impact voters’ privacy.

What information is typically included in a voter file?

The majority of voter files available to the public or specific groups will include the name and address of the voter (unless they have additional privacy protections, in which case, their address may be withheld). Other information includes:

Some states will keep parts of the aforementioned data confidential, as well as:

Some states fail to specify any requirements as to what information should remain confidential. As mentioned, a large number also have no specific rules around what the data can be used for. Others limit data use to political/election purposes only, while a number of others state non-commercial use.

Who has access to the data and to what level also varies by state. A large number allow anyone access (you may need to reside in the state you’re requesting data on, though), some restrict public access by only allowing an inspection of the list at local elections offices, and some will only share the information with political parties/persons. The latter has access to almost every state list.

To find out which states best protect the privacy of their voters, we scored each state on:

According to our data, the five states that lack data privacy protection for voter data are:

The 5 states where voter data privacy is better protected

While no state scores full marks, five states did stand out for their privacy protections:

Massachusetts: We have contacted the elections department regarding the form political parties, etc. need to fill in to acquire the list. Due to no response the state has been scored based on the fact political parties only can access (so will need to provide details) and that there are no specific laws surrounding use.

New Hampshire: We have contacted the elections department regarding the form political parties, etc. need to fill in to acquire the list and the cost of getting this. Due to no response the state has been scored based on a recent quote to one political party – $8327 – and the fact political parties only can access (so will need to provide details) and that there are no specific laws surrounding use.

For a full list of sources and all of the information on each category, see here: https://docs.google.com/spreadsheets/d/1QFidvrRNy3o3jOwLGxFtEyQBkF8PPslUClf0L6Om8xo/edit?usp=sharing