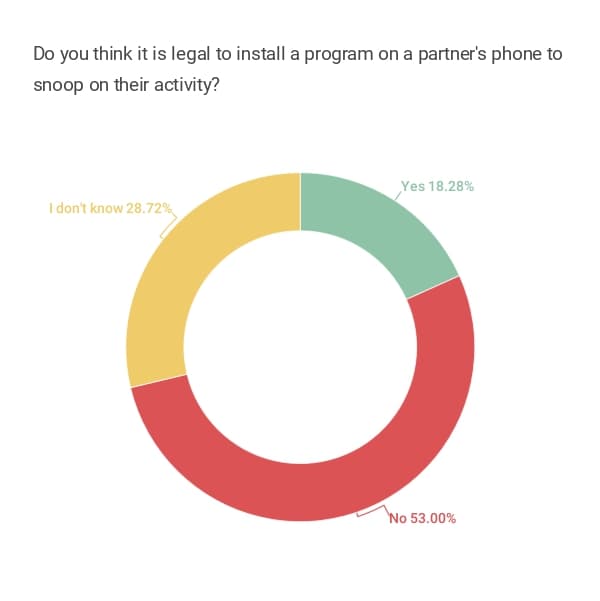 Spy apps can be used to monitor calls, messages, and web histories of the phones they are installed on, then send that data to the snooper who installed them. After reading how cheap and easy it is for someone to get their hands on such an app, as reported by Vice, we wanted to see if people assumed installing one on a partner’s phone was legal or illegal.

The survey of more than 2,000 people–spread roughly equally between age groups, genders, and UK and US nationality–questioned respondents about how they viewed spying on partners’ and children’s phones and internet activity. 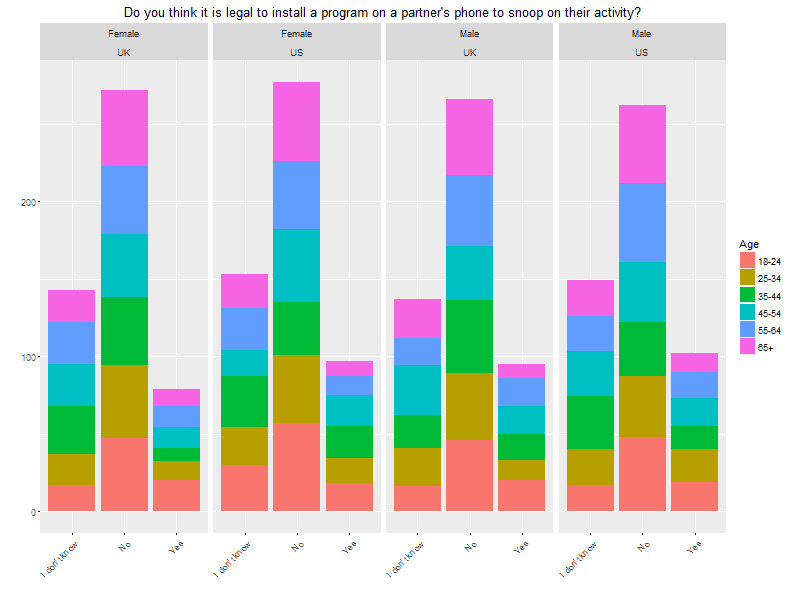 We found the answers to this question somewhat troubling. About one in five respondents thought it was not illegal to install a spying program on a partner’s phone to snoop on their activity. Over one-quarter of those questioned weren’t sure.

As a general rule, it is illegal to install an app on another person’s phone without their knowledge. Whether doing so actually is illegal depends on the circumstances. You might find exceptions if the spying partner owns their spouse’s phone or if he or she pays both of the phone bills.

“It’s a legal gray area, in that the laws haven’t been truly tested in this arena as of yet since the technology is relatively new, so as relevant cases move through the legal system they’ll be decided on a case by case basis,” says Josh King, a legal expert in privacy laws and the Chief Legal Officer of Avvo, an online legal marketplace in the US. “Intentional infliction of emotional distress, fraud claims – all could be implicated, depending on the circumstances. It’s also possible that the Computer Fraud and Abuse Act could be used to prosecute someone who installs this type of app on someone else’s phone.”

Spy apps can cost less than $100. While they’re often officially marketed to private investigators, there’s nothing stopping a spouse or parent from buying one. Once purchased, the buyer can download an app to their partner’s phone that runs hidden in the background. At specified intervals, it sends call and message data to the buyer. Installing the app usually requires physical access to the phone of the person being spied upon. Obviously, a spouse or significant other will have plenty of opportunities to be alone with their partner’s phone in order to do this.

In the UK, Digital Trust CEO Jennifer Perry says installing an app without the person’s agreement is illegal under the Computer Misuse Act. “If it’s being used to control a romantic partner, then more often than not it could constitute as a form of a abuse,” King says.

A survey by Women’s Aid, a UK-based domestic violence charity, found 41 percent of domestic violence victims it helped were tracked or harassed using electronic devices. Another 2014 study by the Digital Trust, an organization that works to support victims of digital abuse and cyber stalking, found more than 50 per cent of abusive partners used spyware or some other form of electronic surveillance to stalk their victims, according to the Independent.

“The research I’ve seen is women are much more likely to read text and go through a phone, emails and social media accounts but not necessarily use spyware. That is just semantics, the outcome is the same it is gaining access to a person’s information without their consent,” says Perry. “It doesn’t differ if a woman uses this technology on man. The Computer Misuse Act doesn’t say men shouldn’t do xyz. The law applies equally to both and men and women.”

Perry says the most common excuses for using spyware on spouse are:

But in all of these cases, Perry says there’s almost always a better alternative than breaking the law to spy on a person’s phone or other device.

“Domestic abusers tend to install the software as a tool to exert coercive control or because they are obsessive and fixated on the individual. They will often dress it up the use of spyware as ‘concern’ either to the victims or when questioned,” she says. “Installing the software is a tool, a method to carry out abuse. If the case involves domestic abuse, then any software is an extension of that abuse.”

Spying on your kids

“While this technology on the surface appears to be invasive, cell phone monitoring applications have legitimate purposes and can be put to good use, such as parents needing to monitor their children,” says Lyn Hastings, VP of Operations at The Powerline Group, a company that creates and sells spy apps. “Using this kind of software can help keep children away from child abusers, bullies and other seedy people that lurk online. Parents can actively decrease the risk of exposing their child to danger.” 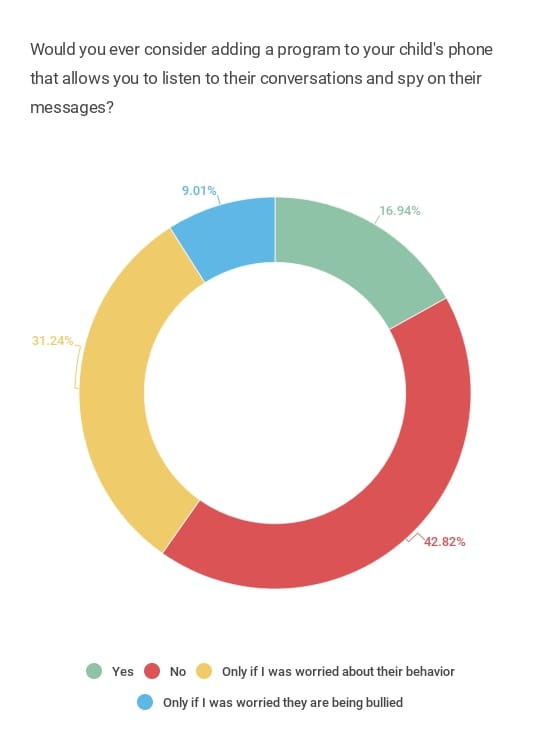 Whether you peruse the internet history of your children or peek at the messages on their phones depends largely on your age. The younger you are, the more likely you are to do so. But there’s a simple explanation for this: older people are more likely to have adult or nearly-adult children that don’t require supervision. American women were the only group in which the majority said they would snoop on their children’s online activity. British men were the least nosy. 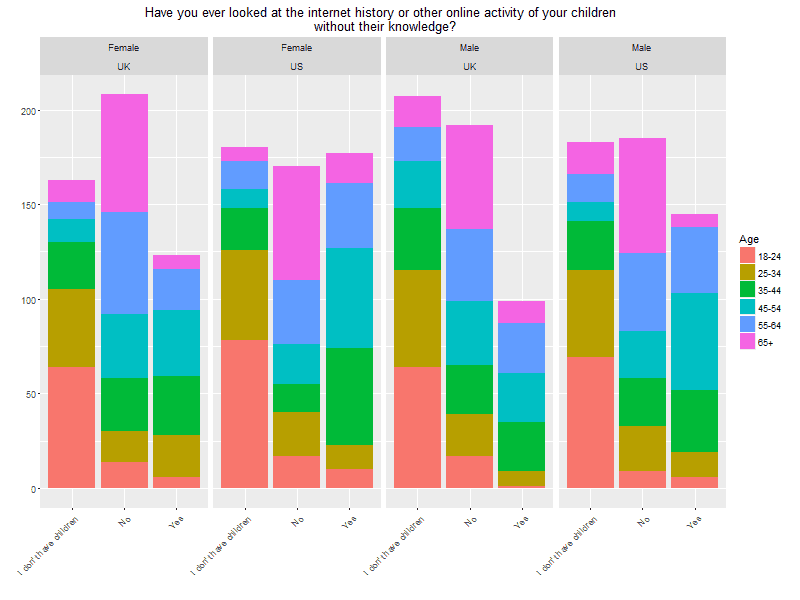 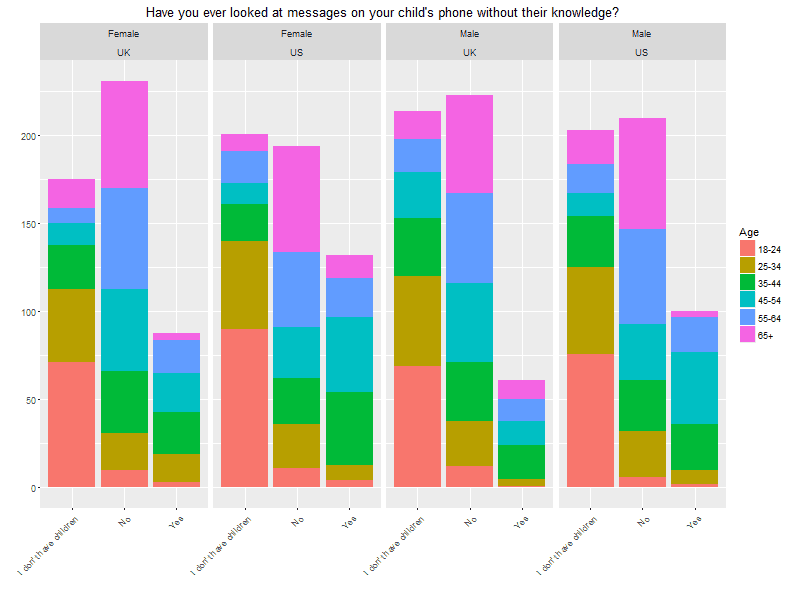 American women were also most likely to install spying apps on their children’s phone to monitor phone calls and messages without their knowledge. Spying on your own non-adult kids is typically not illegal, but there are exceptions. 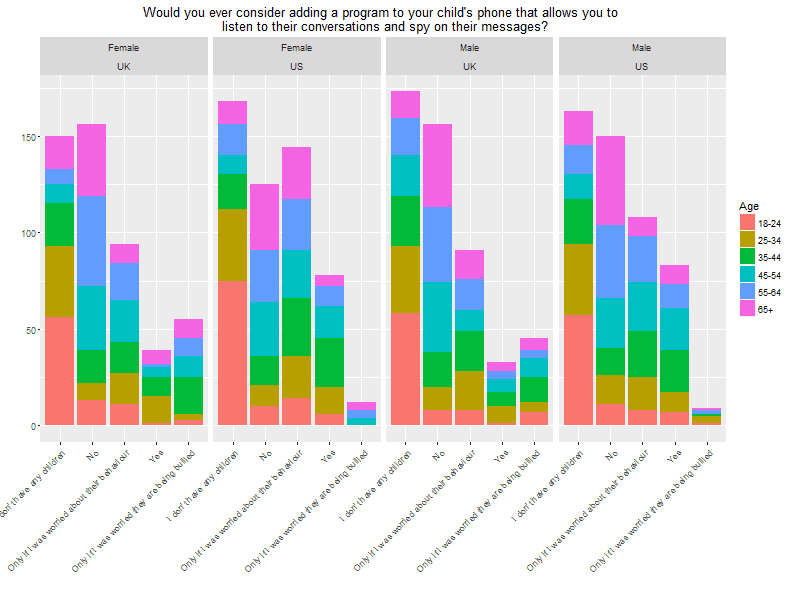 “Children are also entitled to a level of privacy under EU legislation. EU recognises the rights of children’s privacy,” Perry says. “Certainly, children at risk of grooming, self-destructive behaviour, suicide, etc, monitoring software may be useful if the person monitoring has the resources to use that information appropriately to get the child assistance. I think this is a key issue. If you gather information, how are you going to use it?”

When children become adults, however, it is altogether illegal for parents to spy on their kids.

“If an adult is engaging is high risk behavior, the parents are not entitled to intervene. I know there are young adults at university whose parents are sick with worry but will not have any legal rights to monitor them without their permission,” Perry says.

American women were most likely to have viewed their partner’s internet history and look at their phones without their knowledge. British men were the least likely, while the proportion of British women and American men who admitted to snooping were about the same. 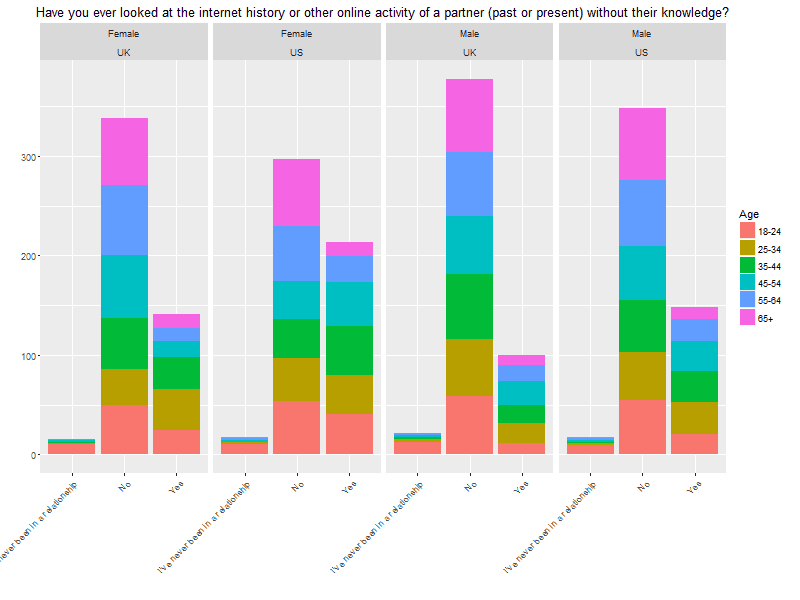 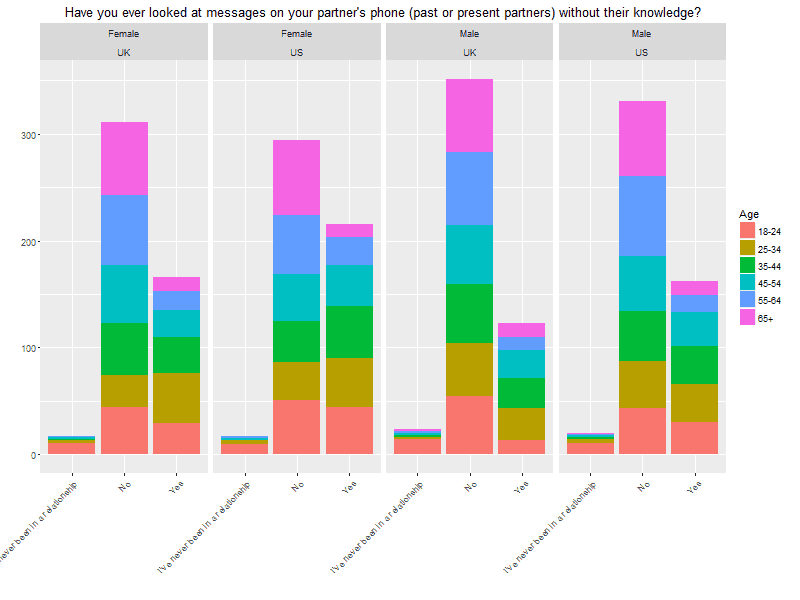 Likewise, American women were also the most likely to install an app on their partners’ phones to spy on phone calls and messages, although those who gave an affirmative answer usually said they would only do so if they though their partner was being unfaithful. Again, British men were the most trusting, while American men and British women hovered around the middle. 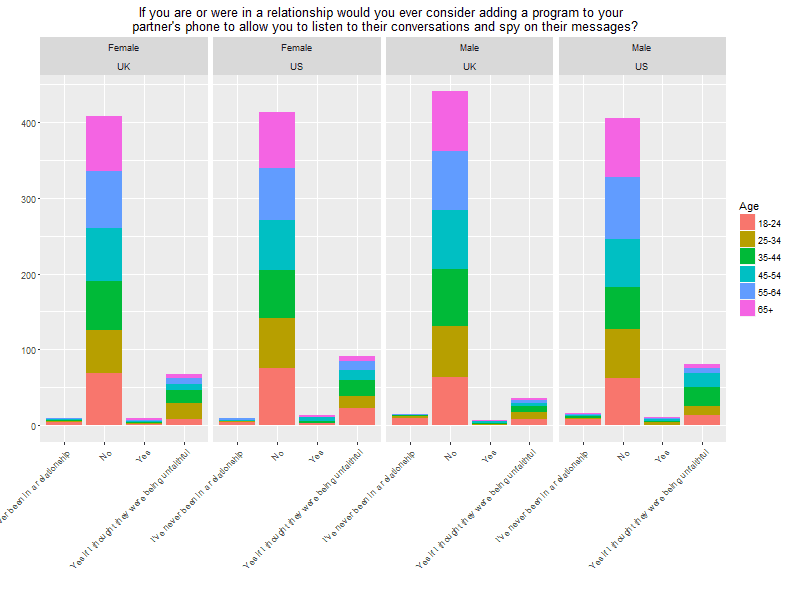 On the other side of the coin, British men were most likely to confront their partner if they found such an app on their phone, although the vast majority of respondents from all groups said they would react in the same manner. Americans were slightly more likely to ask for a divorce than Brits. 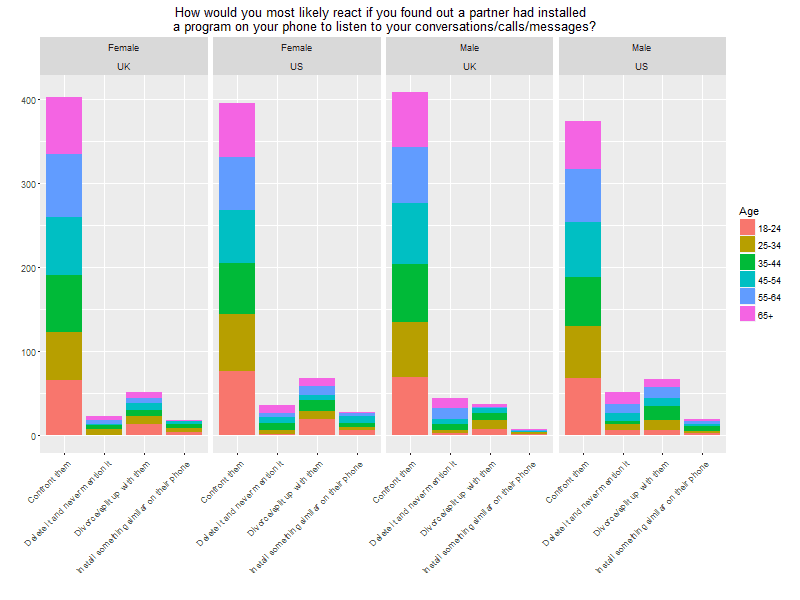 American women, particularly those in the 18-24 age group, were most likely to sneak a peak at the other person’s phone on a date, although the overwhelming majority across all demographics said they wouldn’t do this. 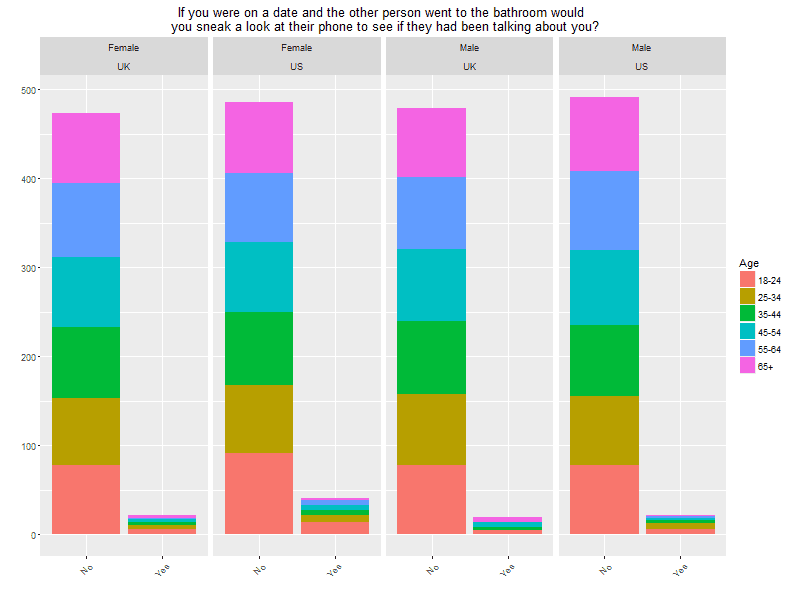