Do I Support Net Neutrality?

In 2015, under the Obama administration, rules were enacted that prohibited internet providers from increasing charges for specific content or giving certain websites preferential treatment. These rules came to be known as “net neutrality” and were quickly taken away after the FCC voted to repeal them in 2017. The repeal ignited a strong reaction from both the public and Democratic lawmakers, many of whom are pushing for the decision to be overturned.

So what exactly is net neutrality, and what does its repeal mean for you? How many Americans are knowledgeable about the policy, and how many support it? We compiled a list of the basic tenets of net neutrality and converted them into questions to gauge the public’s understanding. Using these questions, we surveyed over 1,000 Americans to measure their familiarity with net neutrality and their positions on the issue.

What Is Net Neutrality? 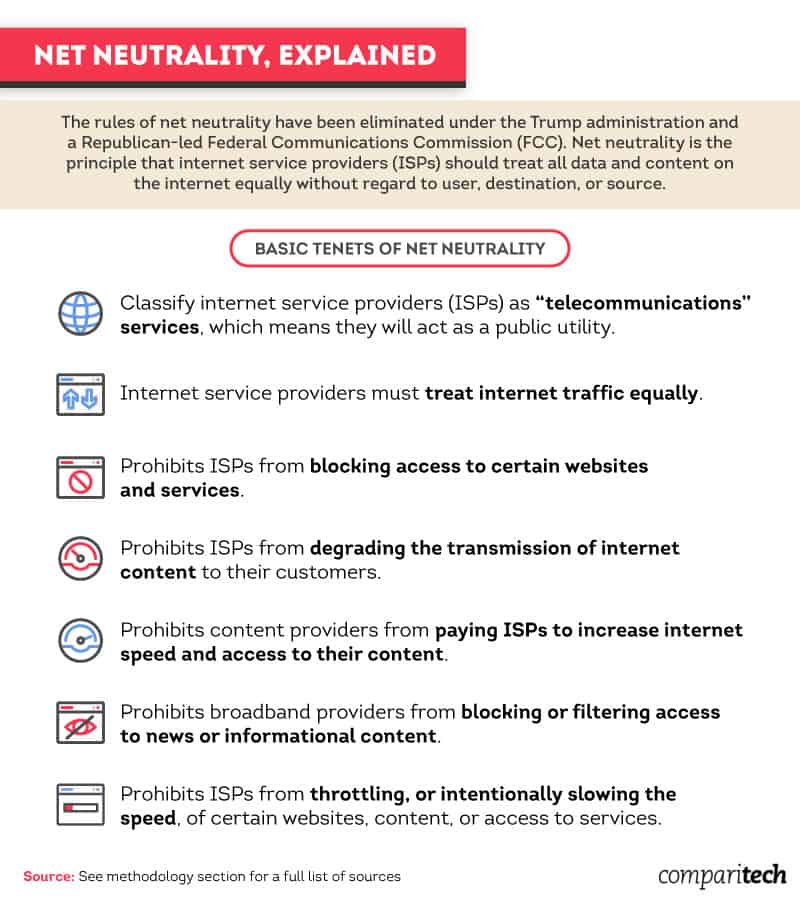 The basis of the internet is to connect people. Since it’s always been open for all to use, the government’s role in overseeing the rules of the web has separated people and sparked a bipartisan debate. Democrats have long supported federal regulations over the internet to prevent large companies and providers from taking advantage of and exploiting Americans. With backing from Google, Amazon, and Facebook, net neutrality passed as law in 2015. But as tables turned and Republicans entered the White House, their disapproval of government interference spurred the Republican-led FCC to repeal net neutrality. It’s obvious the two parties don’t align on the issue, but what exactly is the policy they disagree on?

Net neutrality is the principle that internet service providers (ISPs) should treat all data and content on the internet equally without regard to the user, destination, or source. Put simply, net neutrality is equality for the internet and everything it provides. The specific principles of this policy include classifying ISPs as “telecommunications” services and prohibiting ISPs from blocking access, degrading transmissions, and slowing the speed of content. The policy also prevents content providers from paying ISPs to increase internet speed and access to their content. 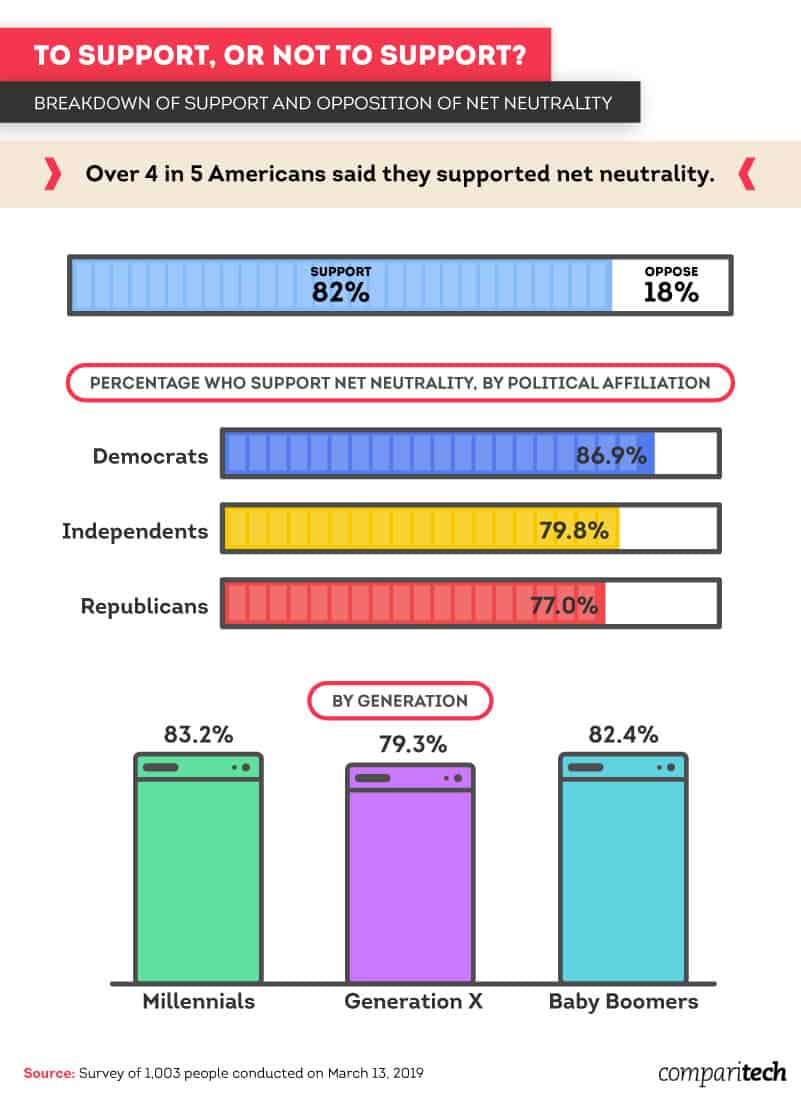 Despite partisanship among government officials on this issue, the American public isn’t as split. Over 4 in 5 Americans said they supported net neutrality, and the majority of Democrats, Independents, and Republicans were also supporters.

Democrats were the most likely to support this policy (over 86 percent); however, 77 percent of Republicans supported net neutrality. Support didn’t vary much when looking at the generations, either. Interestingly, almost the same amount of baby boomers supported net neutrality as millennials, with support at 82 percent and 83 percent, respectively. While millennials are known for their technology use, older generations are catching up in technology ownership and social media use. 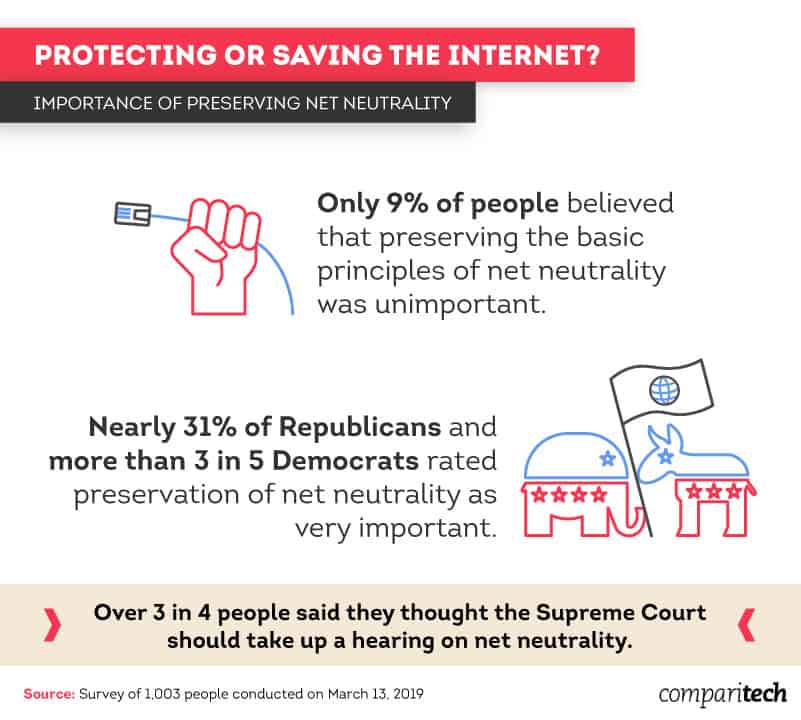 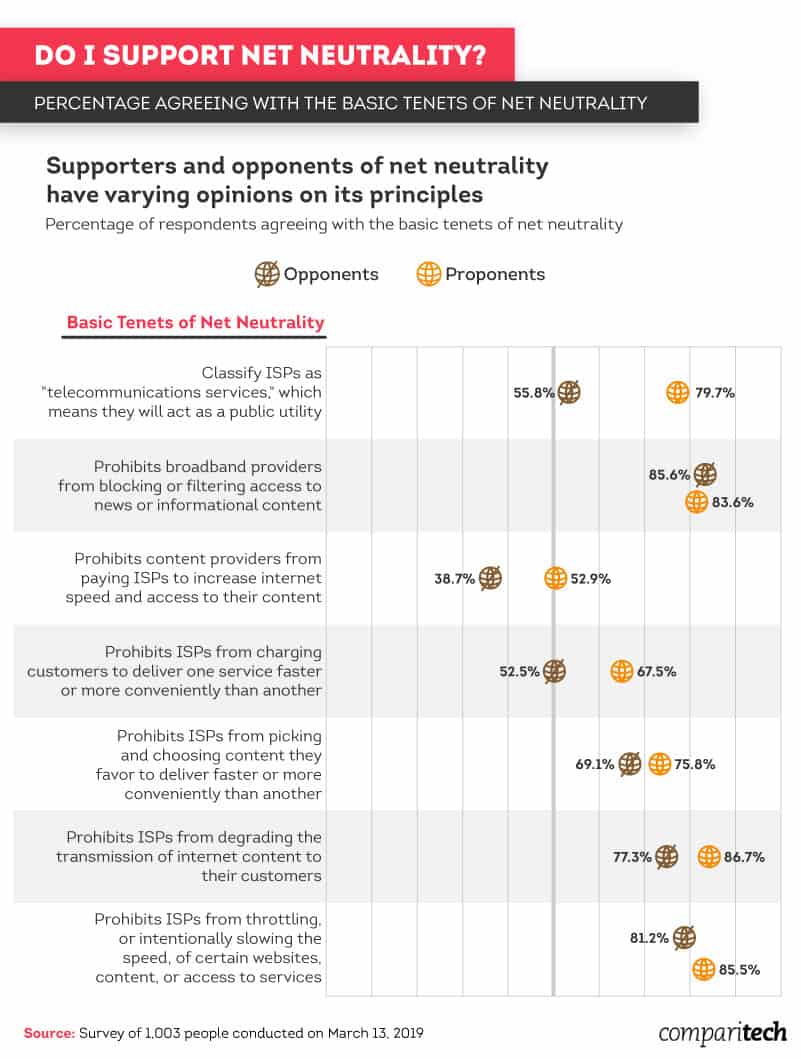 To gauge how opinions vary between proponents and opponents of net neutrality, respondents rated their agreement with various statements related to the basic tenets of the policy. Surprisingly, both proponents and opponents seemed to view most statements similarly. The majority of both sides agreed that ISPs should be unable to throttle certain websites, content, or access to services – 86 percent of supporters and 81 percent of opponents agreed with this statement. About the same percentage of each group agreed with prohibiting ISPs from degrading the transmission of internet content to their consumers. Opponents and proponents alike were also largely supportive of making sure broadband providers were unable to block or filter news and informational content to their customers.

Where the sides differed most was when asked whether ISPs should be classified as “telecommunications services” and act as a public utility. While 80 percent of net neutrality supporters thought this shouldn’t be allowed, only 56 percent of opponents agreed. 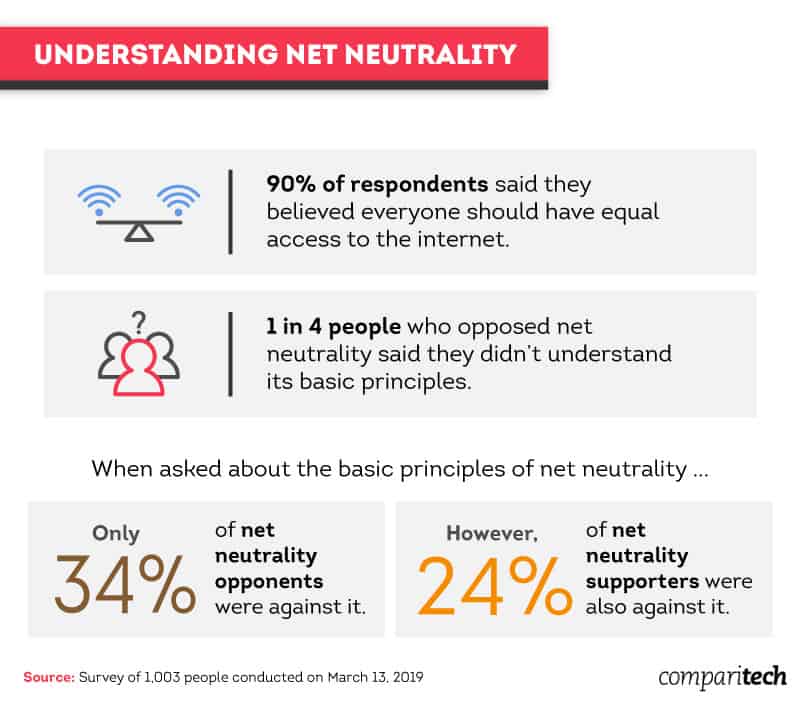 Despite some respondents disagreeing with certain tenets of net neutrality, 90 percent believed everyone should have equal access to the internet. And for those who opposed the policy, over 1 in 4 admitted they didn’t understand its basic principles. 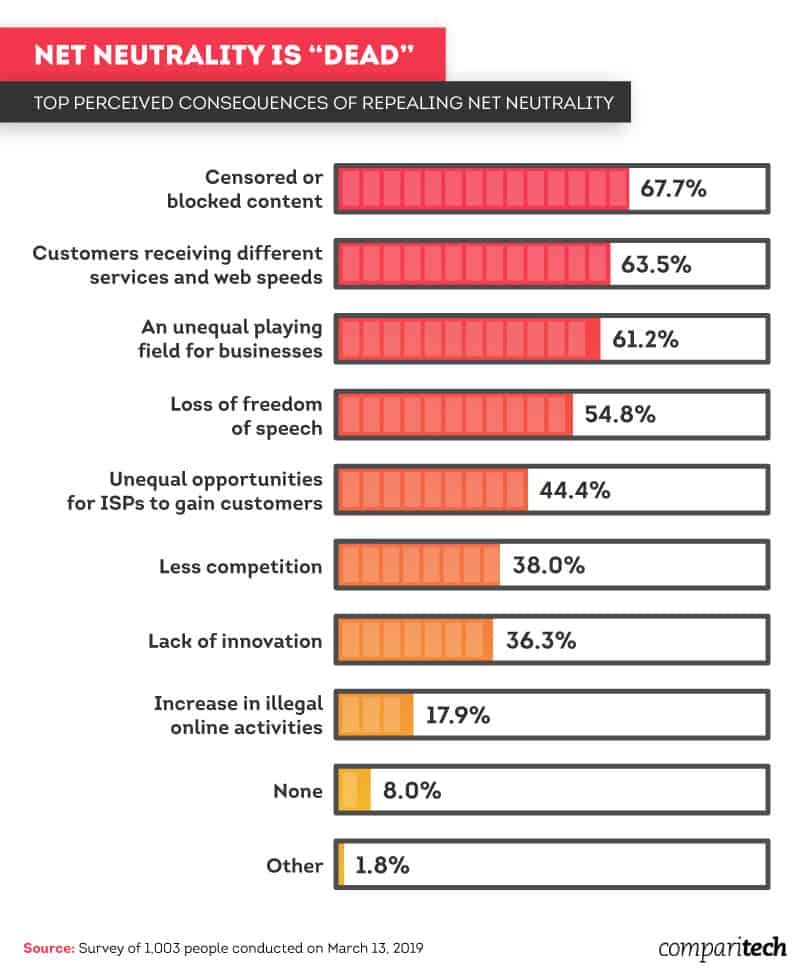 Although net neutrality was repealed in December 2017, the effects have yet to be seen. So, what are people expecting to happen? Sixty-eight percent believed the repeal would lead to censorship or blocked content, and 64 percent believed customers would receive different services and web speeds.

Although not a direct effect of net neutrality, 18 percent thought the repeal would cause an increase in illegal online activity. Eight percent, however, said they thought no consequences would come from the removal of the policy. However, experts say the change will take place over time, and consumers won’t see an immediate effect.

The Price Is Right 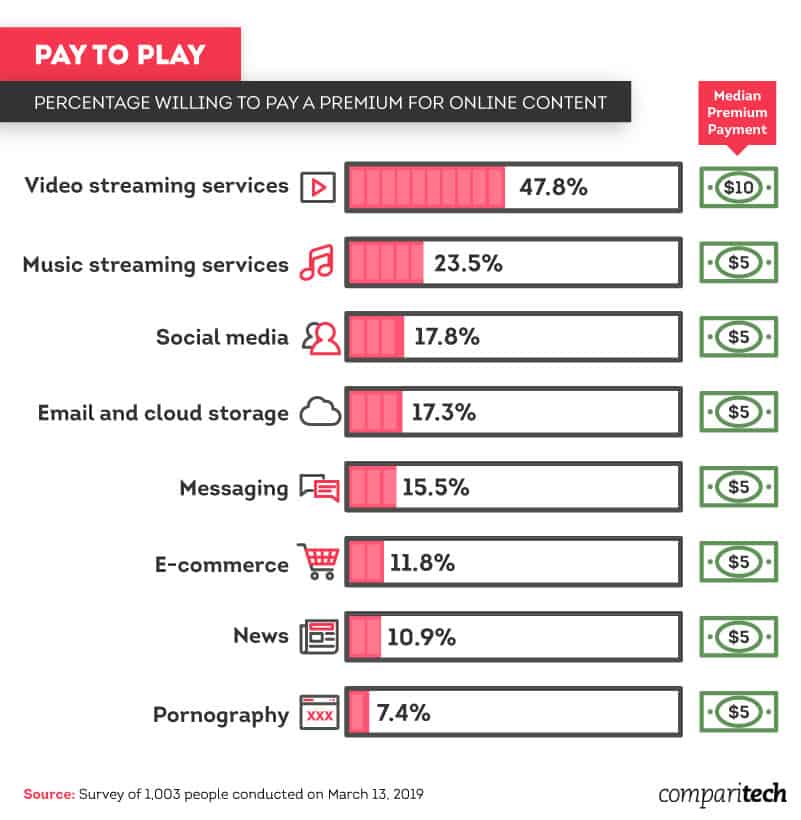 The majority of the American public seems to support net neutrality, despite partisanship among government officials. Support, or lack thereof, isn’t necessarily tied to knowledge about the policy, as many can define net neutrality as a starting place. However, when it comes to the potential to pay more for services, some aren’t deemed worthy of a premium payment.

Regardless of support or opposition for net neutrality, the repeal may lead to an increased price for certain services. Knowing which services are worth the price is vital in the coming years, and Comparitech is here to provide you with the information you need to make the right decision. Find out more information about the best VPN services to ensure your own net neutrality, as well as the all-around best VPN services to use. Additionally, browse hundreds of products and services, all compared and reviewed for your convenience. For more information, visit us online today.

Attention-check questions were used throughout the survey to demonstrate that participants were paying attention and entering consistent data. Respondents who failed to answer an attention-check question properly were excluded from our findings. The main limitation of this study is that the survey data rely on self-reporting, which is subject to flaws such as telescoping, selective memory, and exaggeration. Another limitation of this study is that since the survey was conducted online, participants may have more knowledge in regard to the topic at hand. No statistical testing was performed on the claims made in this study, so the findings above are solely based on means.

Know someone who could learn more about net neutrality or has a strong opinion on the matter? Feel free to share the graphics and content of this project for noncommercial purposes. Just don’t forget to link back to this page so that the authors receive proper credit.