How Do People Feel About Cryptocurrencies?

Which cryptocurrencies are viewed most favorably? Analysis of 48K Reddit posts

Similar to the stock market, cryptocurrency trading prices are heavily influenced by demand for each digital product. This means that public sentiment surrounding each of the thousand-plus cryptocurrencies can influence their trading prices. The success of your trade, therefore, may ultimately depend on the opinions of others, both experts and enthusiasts. Knowing this, we set out to quantify positive and negative public sentiment surrounding various digital currencies, all the while minding the clear caveat that countless additional factors and influences impact trading prices.

Using machine learning, we scraped 48,469 posts on cryptocurrency-related subreddits and 7,500 articles from 48 national and international news outlets, though our full methodology is detailed towards the end of this study. Each article was given a score based on its relative positive and negative sentiment compared with every other article included in the study. For instance, if an article scored more positively than 80% of all articles, this article and the cryptocurrencies it described were given a highly positive sentiment score. Although there are obvious limitations to a machine’s ability to understand the many nuances of human language, there were clear and substantiated trends discovered throughout. Continue reading to see the public’s take.

Bitcoin’s history has created quite the roller coaster in its short decade of existence. The graph above begins by looking at the total number of posts from various cryptocurrency-related subreddits in 2017 and continues to July of 2019, creating an interesting visual behind just how extreme the crypto chatter has been. 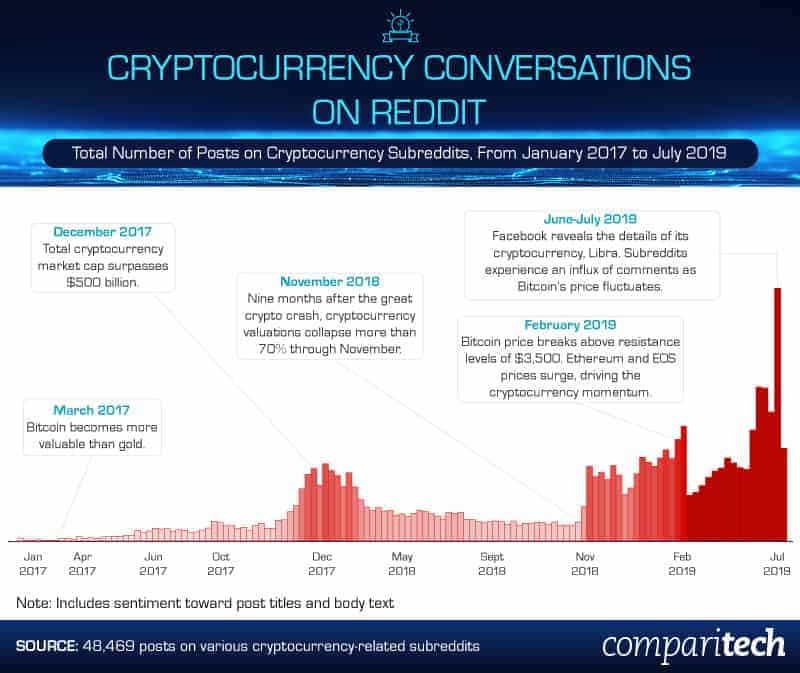 The first noticeable rise in the topic’s frequency of mentions occurred when the coin’s value surpassed that of gold. Some experts consider gold to be an “inflation hedge,” as the total supply of the product stays fairly constant, as opposed to paper money, of which supply increases daily. When bitcoin, a digitally fabricated concept, surpassed this tangible value, people were understandably talking.

Less than a year later, surpassing the value of gold became a relatively small accomplishment for bitcoin, as its historic and meteoric price run led to the total cryptocurrency market cap reaching over $500 billion in December of 2017. Online public discussions of the matter reached one major peak during this time as well. Conversation closely surpassed this frequency only after November of 2018, where all cryptocurrencies had collapsed by an astounding 70% of their former glory. Discussions on subreddits surged in the summer of 2019 as Bitcoin eclipsed the $14,000 mark and Facebook announced the details surrounding their cryptocurrency, Libra.

Previous studies have revealed that people are much more likely to write a negative review than a positive one, in spite of the many positive experiences an establishment may yield. This trend, however, was completely reversed when it came to reviewing cryptocurrencies. Internet talk was overwhelmingly positive in the conversations we examined between January of 2017 and July of 2019. 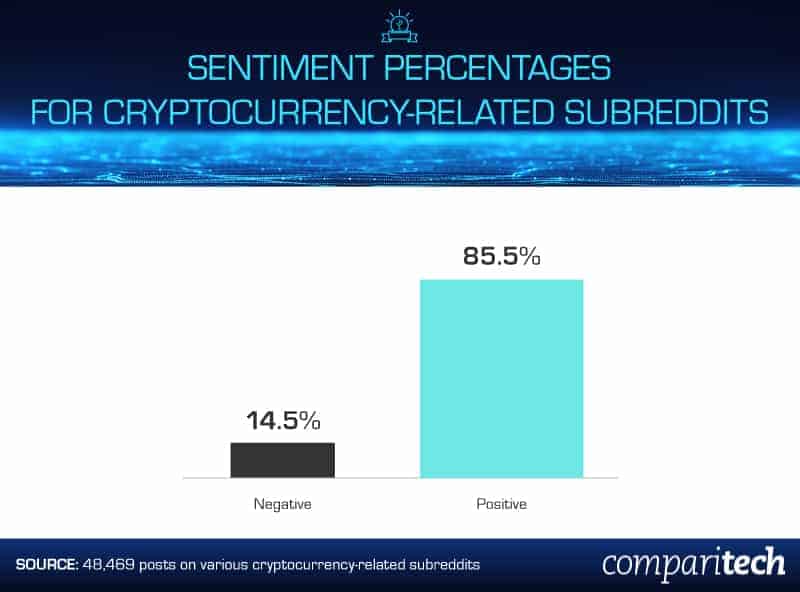 While only 14.5% of subreddits about cryptocurrency were scored as having a negative sentiment, a whopping 85.5% were deemed positive. These conversations included investors and noninvestors, and they discussed not just bitcoin but also other popular cryptocurrencies as well, including everything from Ethereum to Tron. Although conversation contributors remained diverse, sentiment did not, and positivity dominated the scene.

That positivity, induced by peaks in prices and online chatter, may have as much to do with investor motivations and mob mentality as it does with natural conversational instincts. Leading psychologists today define this mob mentality through a term called “group polarization,” wherein “like-minded individuals reinforce one another’s viewpoints.” In other words, those with a like-minded interest in digital currency may compound and reinforce positive (or negative) conversations simply because their contemporaries are doing so. Additionally, investors have a monetary motivation to augment original trading prices and can find success doing so by encouraging blind positivity around the topic. 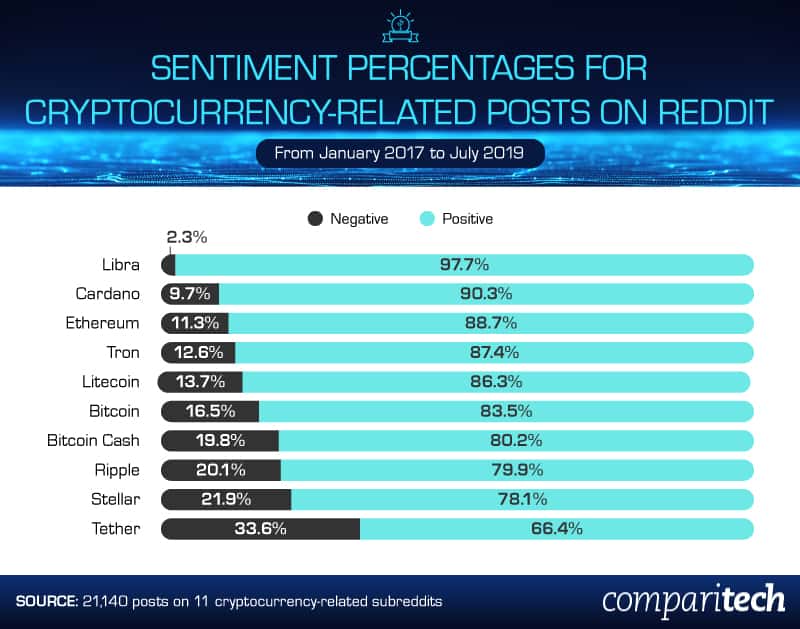 Bitcoin, of course, is just one of the thousand-plus of digital currencies available today.

Although online conversations about the other popular cryptocurrencies were overwhelmingly positive, attitudes and frequency did change relative to the cryptocurrency discussed. The most positive discussions surrounded Libra. The new project, which looks to enable users to send Libra via Facebook-owned Messenger and WhatApp, renewed hype among Redditors. The majority – 98 percent – of the subreddits posts were positive. Trailing behind the tech giants ambitious digital currency was Cardano. Cardano’s creators describe their product as more than currency, proclaiming it a “technological platform” that enables quick and direct transfers of money for individuals, institutions, and governments. From being praised as having one of the most protected, functional wallets to commanding an active community, the blockchain project maintains a positive share of Reddit posts despite past price fluctuations. Less than 10% of Reddit posts about Cardano were negative. For reference, Cardano’s all-time high was a valuation of $1.33. 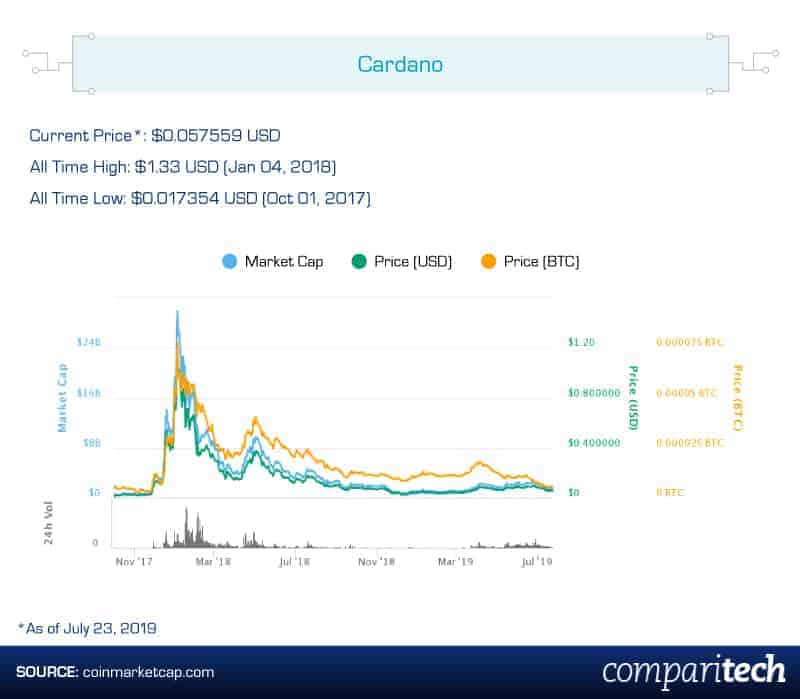 The most negatively viewed cryptocurrency was Tether; however, this was also the least commonly discussed. Nearly 34% of Tether discussions scored as negative, which may reflect its relatively volatile influence: Tether is what’s known as a “stablecoin” (meaning it’s tied to the U.S. dollar), yet critics insist that more USDT (Tether) has been issued than actual dollars the company has in the bank. One Reddit commenter went so far as to call Tether, “The worst thing to happen to crypto to date.” Then in 2017, researchers found that sales of Tether were used to artificially augment the price of Bitcoin. Though negative sentiment widens for this controversial coin, the price typically hovers around $1.00. The abundance of positive posts submitted to Reddit may be influenced by Tether’s market cap exceeding $3 billion in May 2019 — a 50% increase — from the previous month. 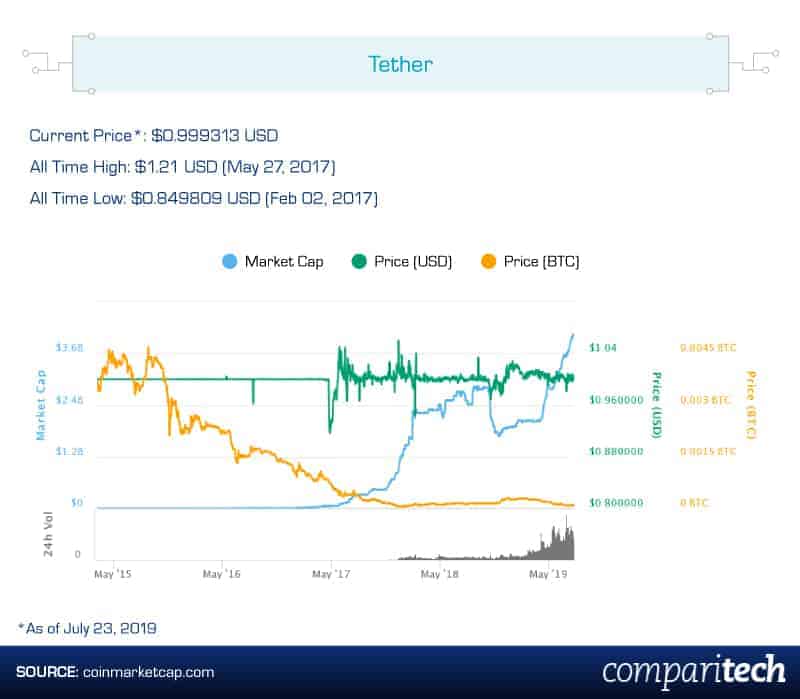 On the major news sites that covered cryptocurrency most often, coverage was much more negative, as compared to investors and noninvestors. After scraping 17,490 news articles covering cryptocurrency, Forbes revealed itself to have the most positive opinions on the world of digital currency. Nearly 80% of Forbes articles spoke positively about cryptocurrency. Just recently, it touted their benefit of acceptance at mainstream places like Starbucks and Whole Foods, which, in Forbes’ words, “is a big, big deal.” BuzzFeed and Reuters were the most evenly split, with 48.7% and 47.2% of their articles featuring crypto-positivity, respectively. That said, it’s important to mention Forbes’ open welcome to a variety of contributors, including potential crypto-investors and fans who would much prefer to fill the prestigious and credible website with positivity and hope for themselves and other digital investors. 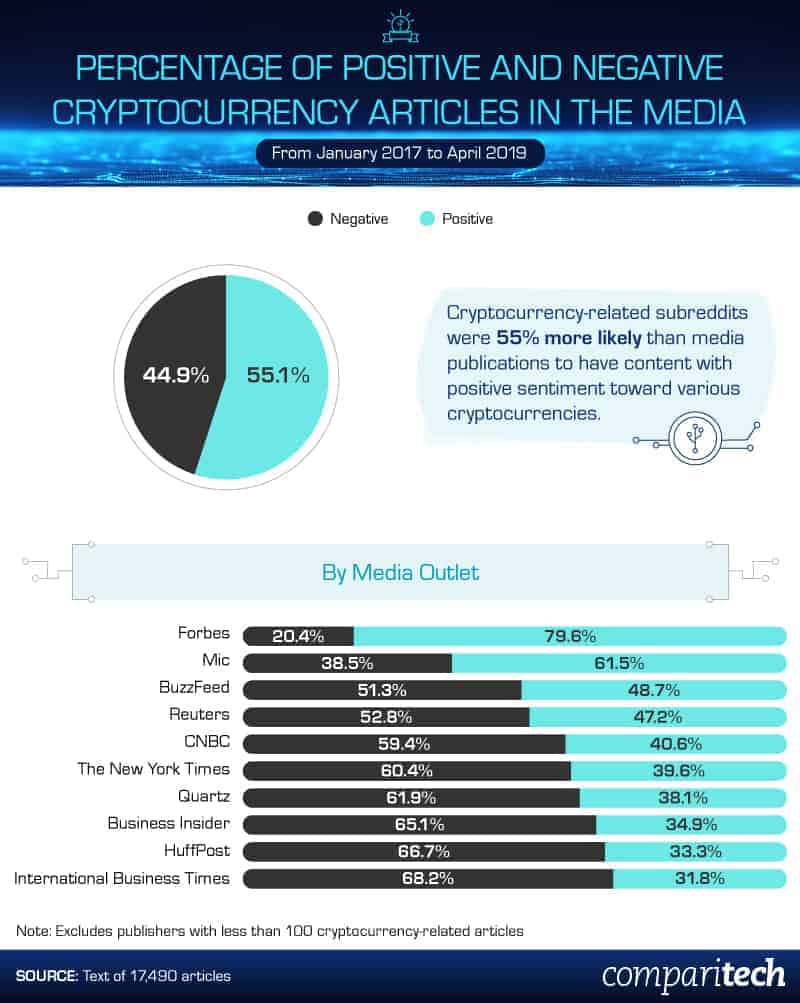 HuffPost and the International Business Times accumulated the most negatively scoring cryptocurrency articles. HuffPost has described conspiracy theories in the industry, while the International Business Times featured the $40 million hack the industry incurred. Of course, the above studies were neither exclusively negative nor positive, and individual writers have their own influence on the topic.

Over the short history of cryptocurrency’s existence, both trading prices and related conversations (positive and negative) have oscillated drastically. Why? Price fluctuations fuel sentiment, yet sentiment fuels price fluctuations as well. Harmless internet chatter, especially when it snowballs into “group polarization” can directly impact the investments of professionals and enthusiasts the world over. In other words, your two cents may influence much more than two cents worth of Bitcoin, or any other cryptocurrency.

As our data suggest, online enthusiasm for the cryptoworld is overwhelmingly positive. Eighty-six percent of discussions online touted the benefits and optimism of the crypto world. This is all in spite of the major downward spiral in prices and some reputable naysayers. Depending on the news outlets you read and the colleagues you interact with, your opinion and investment decisions may be determined more by others than you realize. Question your positivity as well as your negativity, and when possible, find legitimate, unbiased, and informative research on the topic.

If you do decide to invest or continue investing in digital currency, you’ll be doing so digitally. It’s important to not only have the right technology to do so, but the most secure technology as well. Fortunately, Comparitech pours thousands of hours in the name of this exact type of research. Comparisons of tech investments, from which you may choose to do most of your trading, is the first key step in today’s modern financial endeavors.

For this project, we scraped posts from various cryptocurrency-related subreddits from January of 2017 to July of 2019. This project also made use of article link databases provided by mediacloud.org, an open-source platform for studying media ecosystems. Our team surveyed media outlets for articles covering cryptocurrency from January of 2017 to April of 2019. Media outlets with a low article volume (<100) were excluded from the study. All subreddits and articles were downloaded and analyzed using the VADER (Valence Aware Dictionary and sEntiment Reasoner) sentiment analysis in conjunction with the Natural Language Toolkit (NLTK) library in Python, which provides a sentence-level analysis of long-form text and computes aggregate scores per article for positive, negative, and neutral sentiment. Our reported analyses include the full text of 48,469 subreddit posts and 17,490 online news articles.

Interested in contributing to the sentiment discussion around cryptocurrency? Feel free to share this article online for any noncommercial purposes, so long as you link back to this page so that its contributors can receive proper credit for their research.