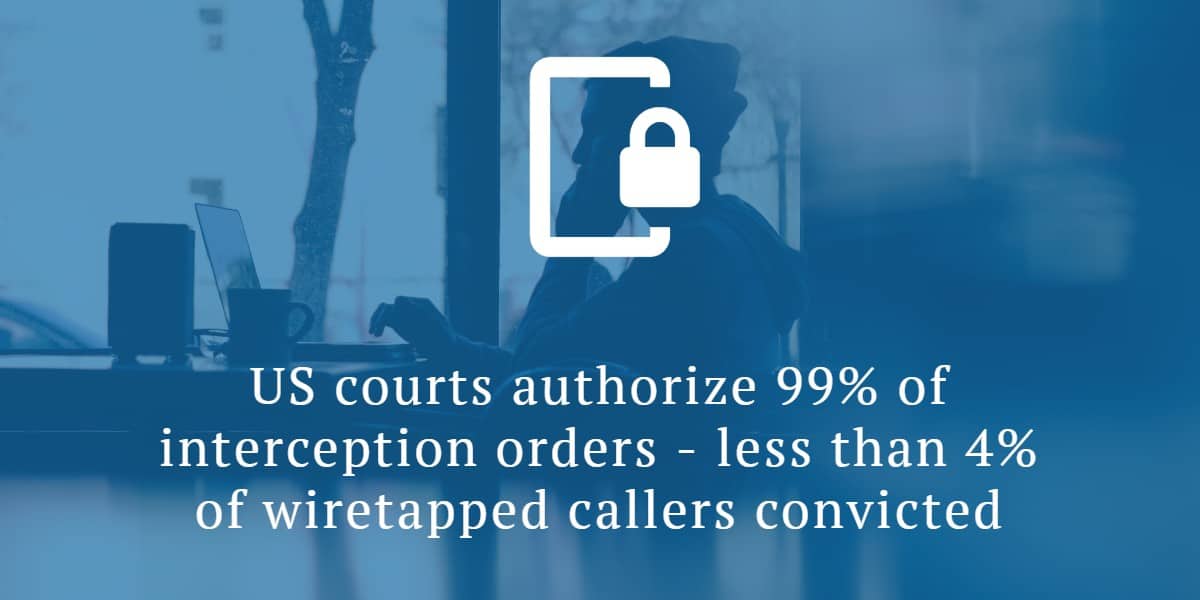 48 jurisdictions (44 states, the District of Columbia, Puerto Rico, the Virgin Islands, and the federal government) have laws that give courts the power to issue orders permitting electronic, oral, or wire surveillance. Law enforcement officers may apply for these orders in the investigation of specific crimes, including murder, human/sex trafficking, drugs, kidnapping, and gang-related crime. They must have “probable cause” that evidence will be obtained through the interception.

So, to what extent are states conducting wiretapping? What devices are being targeted? Where are people being targeted (i.e. on mobile devices or in their office)? How much are these orders costing governments? And how successful does wiretapping prove to be?

Our team of researchers explored the state and district wiretapping orders submitted to United States courts in 2019 to find out.

The top 5 states for interception orders

Interceptions by type of crime

Conspiracy and illegal drugs (included as a separate category to narcotics) were the other top categories for the largest number of interceptions, accounting for 14.8 and 11.9 percent respectively.

More mobile devices may have been intercepted along with other methods of communication. For example, 2,804 people were cited as having their apps, computers or emails, texts, or mobile calls intercepted with over 3.1 million interceptions across this combined category in total.

Can states justify the high costs involved in interception orders?

As we can see, many states are conducting wiretapping on huge scales. This not only has a large cost when it comes to state funds but it also has an immense cost on people’s privacy.

Plus, with 99 percent of interception orders being granted by courts, there seems to be little consideration for the innocent parties that may have their privacy invaded through such orders.

Nevertheless, the latest report does suggest that an increasing number of encrypted messages are being encountered through these interception orders (a year-on-year increase of 135 percent from 146 to 343). 97.4 percent of these were undecipherable.

Perhaps encryption holds the answer, then?

For now – maybe. With the government’s ongoing attempts to access encrypted messages and calls for law enforcement purposes, one has to wonder what, if any, safeguards will be put in place should encrypted messages become accessible under these interception orders, too.

Using the US Courts’ wiretap reports for district and state courts in 2019, we collated the data to create state totals across all of the categories included within the reports.

No information was included for Alaska, Maine, Montana, North Dakota, or Wyoming. This is due to no reports having been submitted to the Administrative Office of the U.S. Courts or late submission (in which case, they will be included in 2020’s figures).

In some cases, the number of people intercepted is “0.” This may be due to figures being carried over from previous years or incomplete reports.

You can view the full dataset here: https://docs.google.com/spreadsheets/d/12lGkSz5HSK9SoJ6_68J6ueN00WZzGIeETrTaf3PmWyI/edit?usp=sharing