Stalkerware app use by country 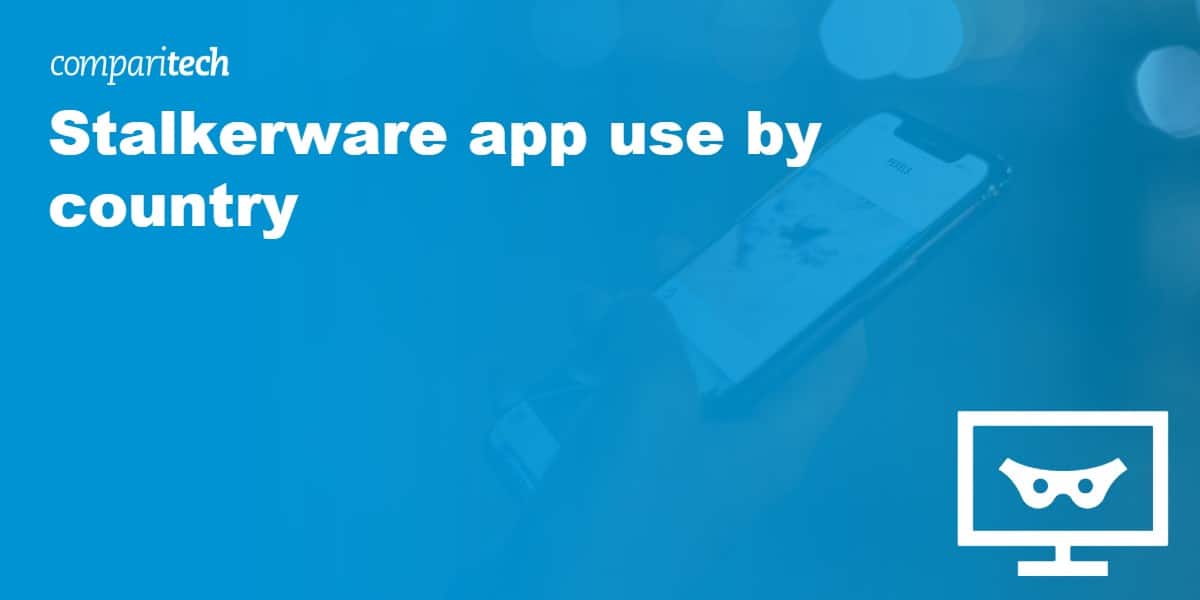 For the majority of us, our cell phones are a gateway to our lives. From helping us navigate our way through a new city to being our primary source of communication, there isn’t much we don’t use them for.

Sadly, all of these convenient features also leave our phones open to abuse.

When installed on your phone, stalkerware can give someone access to your location, messages, website search history, photos, and more. Worst of all, stalkerware apps are often designed to go unnoticed on your phone, appearing as “WiFi” apps or running silently in the background. But despite the invasiveness of these apps, a Comparitech survey found that almost half of people don’t know it’s illegal to install a spy app on their partner’s phone.

To find out just how much of a problem stalkerware is around the world, our team of researchers studied relevant keyword search volumes in over 120 countries.

That stalkerware searches are commonplace in all of these countries but, in some, searches for these types of apps and functions are worryingly prevalent.

Top 10 countries with the highest stalkerware search volumes per 1,000 users

According to the keywords we analyzed, the following 10 countries have the highest stalkerware-related searches per 1,000 people:

Of all the countries we analyzed (121 in total), the average stalkerware-related searches per 1,000 people was 6.69. “Mobile tracker” was the most searched term overall with 6.3 million global searches each year. India had the highest volume of searches for this keyword with 4.18 million in total.

Top 10 countries with the highest stalkerware search volumes in total

Annual searches for generic apps that may be used as stalkerware

As well as apps that can be deemed specifically as “stalkerware,” there are some that are often used innocently but may also be used to stalk users. This includes standard phone apps like “Find My iPhone” and “Find My Android” as well as GPS trackers. We’ve also included “Life360.” This is an app that has often generated stalkerware claims from teens whose parents use the app to track their daughter’s/son’s whereabouts. However, as users are aware that Life360 is installed on their phone, it didn’t seem fair to include in our overall stalkerware stats.

You can see the search volumes by country in the table below. Most of them are most popular in the United States, but India accounts for 33 percent or 1.1 million of the 3.2 million searches for “find my device” and Brazil accounts for 71 percent or 27,000 of the 38,000 searches for “Google Find.”

Equally, if we add these searches into the overall search volumes (along with all of the stalkerware-specific keywords), we can see huge increases in the number of searches per 1,000 users. While, as mentioned, searches for things like “find my device” may stem from the genuine loss of mobile phones, these programs also give opportunity for stalking activities.

According to Kaspersky data, in 2020, the country with the highest percentage of users with devices infected by stalkerware was Russia. Across quarter 2 and quarter 3 of 2020 (data is only available for these two quarters at present and the software is only available on Android phones), an average of nearly 18 percent of users had stalkerware installed on their phones. This was closely followed by phone users in Brazil and India where nearly 14% and 10% of users had stalkerware on their phones.

Some of the apps that may be used as stalkerware aren’t directly advertised as so and may, therefore, provide some beneficial services. For example, many apps are offered as parental and/or employee monitoring software or suggest that they may be installed on a phone you own/the phone of a consenting adult.

For example, mSpy has a global yearly search volume of over 1.8 million with its highest search volume coming from the US with 552,000. It is marketed as “the #1 choice for parental control,” offering GPS location tracking, access to all incoming, outgoing, and deleted text messages, full call history, and access to social media platforms, media files, emails, calendars, and more. The app also runs in background mode so it isn’t visible on the targeted device.

Others explicitly targeted those who are looking to “catch a cheating spouse.” One example is TheTruthSpy which has a global yearly search volume of 216,000 being particularly popular in the United States, Indonesia, and India (which make up 30, 20, and 13 percent of its search volume respectively). It offers “15+ spying features” to help you “spy on calls, messages, chats, media, social media, browsing history, etc.”

How can you tell if stalkerware is installed on your phone?

Here’s how to find out if Stalkerware is installed on iOS and Android:

Unless your iPhone is jailbroken, you probably don’t have stalkerware. iOS security policies ensure apps don’t have sufficient privileges for the sorts of spying used by these apps.

If you believe your iPhone is being spied on, check to see if it has been jailbroken. Apps like Cydia and SBSettings are usually an indicator that an iPhone has been jailbroken. The perpetrator would need at least an hour or two to jailbreak your phone. A full factory reset should un-jailbreak it.

It can be difficult to find stalkerware on an Android phone, and the symptoms are similar to other sorts of malware. Unusual behavior such as a quickly draining battery, unexpected notifications, and slow startup or shutdown times can be signs of malware.

On Android, check your list of apps in the settings. You can sort them by battery drain or resources used. Stalkerware is usually quite active and will appear near the top of results, often under a suspicious name. Investigate anything you don’t recognize, and uninstall apps you suspect of being stalkerware.

Real-time antivirus might flag stalkerware on your device, but is not a guaranteed solution.

To look at the level of search volumes for stalkerware in each country, we used the Ahrefs keyword tool. We focused on any keywords with a global search volume of over 10,000 (per month), focusing on parent keywords where possible (e.g. spyware instead of spyware apps).