How to watch Miracle Workers season 3 online from anywhere

Trying to watch Miracle Workers: Oregon Trail online? Depending on your location, you may not be able to stream season 3, due to regional restrictions. Fortunately, these are easy enough to bypass and we’ll cover how to stream Miracle Workers from anywhere in the world.
Mark Gill TECH JOURNALIST, VPN AND PRIVACY SPECIALIST 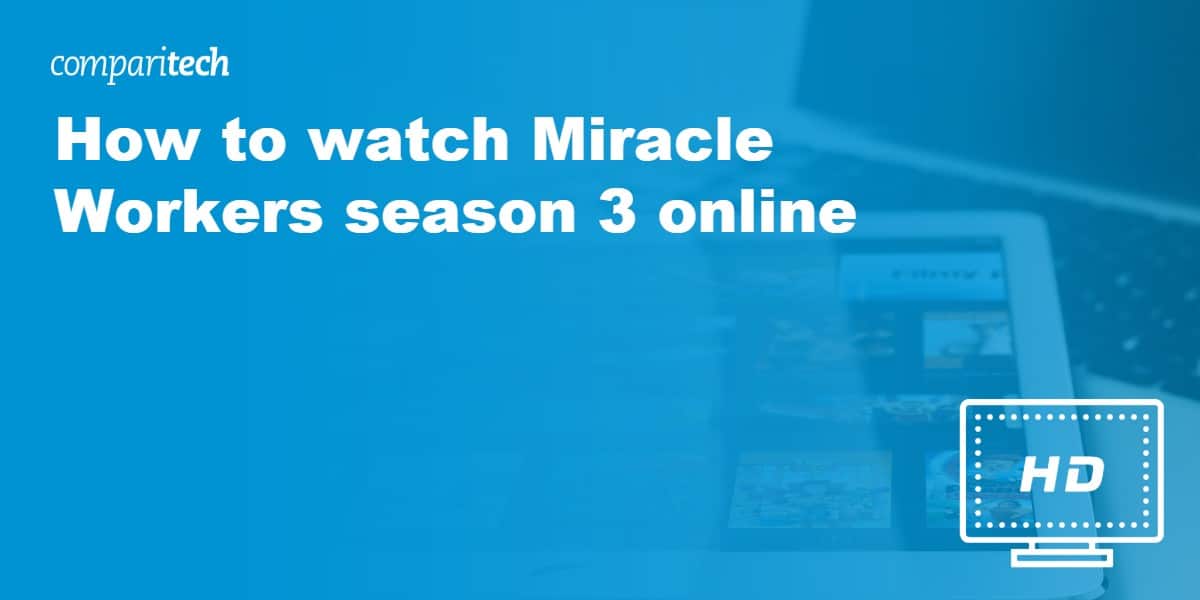 It’s back! Miracle Workers season 3 is scheduled to premiere on Tuesday, July 13, at 10:30 PM EST (7:30 PM PST). An anthology series based on the writings of Simon Rich, the first season stems from his novel What in God’s Name. While the second season (Miracle Workers: Dark Ages) saw the show set in Medieval times, season 3 takes us to the American Old West. In this post, we’ll explain how and where you can watch Miracle Workers season 3 online from anywhere by using a Virtual Private Network (VPN).

Unlicensed streams of popular TV shows such as Miracle Workers are common. However, they’re infamous for their low quality and frequent lag and buffering. Some third-party streams are even taken offline for violating copyright. For these reasons, we’re only recommending official sources for watching Miracle Workers season 3. That way, you’ll be watching in the highest quality without having to worry about missing out.

Miracle Workers season 3 will only be available to stream on region-locked platforms. Going on vacation? A VPN is required to continue watching your home streaming service while abroad.

How to watch Miracle Workers season 3 online with a VPN

A VPN is a service that creates a secure, encrypted tunnel between your device and the internet. In connecting to a VPN server, you receive a different IP address. This makes it look as if you’re browsing from another location so you can access geo-restricted content.

Here’s how to live stream Miracle Workers season 3 from abroad using a VPN:

Miracle Workers: Oregon Trail will air live on TBS. If you don’t want to miss out on the season 3 premiere, we recommend you test your VPN with TBS ahead of time. Should you run into any trouble, you’ll then have enough time to troubleshoot the issue with your VPN’s customer support.

NordVPN is offering a fully-featured risk-free 30 day trial if you sign up at this page. You can use the VPN rated #1 for TBS with no restrictions for a month - great if you don’t want to miss the Miracle Workers season 3 premiere while on vacation.

How to watch Miracle Workers season 3 on US TV

Miracle Workers season 3 will premiere on TBS. If you have a cable TV subscription that includes TBS, all you need to do is sign in to TBS via your TV provider. This is as simple as entering the same login details you use with your cable TV subscription (an email address or username and password).

All of the streaming services that carry TBS are region-locked so you’ll need to connect to a VPN server in the US to watch while traveling abroad. Once you have a US IP address, the content should be unblocked regardless of your location. Still undecided? You can always try NordVPN which includes a 30-day money-back guarantee. This is a great way to try it out risk-free.

Where else can I watch Miracle Workers season 3?

Fans of Miracle Workers in Canada can catch season 3 on CTV Comedy Channel. This is available online via theCTV Go app. Remember, you’ll have to sign in with a cable TV provider to access any of this platform’s content. Furthermore, because CTV is only available in Canada, you’ll need to connect to a VPN server in Canada. With a Canadian IP address, the content should be unblocked and available to stream from anywhere in the world.

Miracle Workers will also be coming to the Stan streaming service in Australia. The first episode will premiere on Wednesday, July 14, with a new episode airing each week. Stan subscribers need only sign in to watch Miracle Workers season 3 at no extra cost. Otherwise, the following streaming plans are available: Basic ($10 AUD/month), Standard ($14/month), and Premium ($19/month). Traveling outside Australia? You’ll need a VPN and Australian IP address to continue watching.

While there’s no UK premiere date confirmed as yet, seasons one and two of Miracle Workers were shown on Sky Comedy. As such, it’s likely that Miracle Workers season 3 will also be coming to the channel in the near future. Sky subscribers can watch online via the Sky Go app. Otherwise, it’s possible to watch Sky Comedy via the Now TV Entertainment package. This contract-free option costs £4.99 a month for the first two months (£9.99 a month thereafter). To bypass geographic restrictions, you’ll need a VPN and UK IP address.

What do we know about Miracle Workers season 3?

Miracle Workers: Oregon Trail sees our favorite cast members transported to the year 1844 and the American Old West. It follows an idealistic small-town preacher (Daniel Radcliffe) as he teams up with a wanted outlaw (Steve Buscemi), and an adventurous prairie wife (Geraldine Viswanathan). Together, they lead a wagon train west on a perilous journey along the Oregon Trail.

We don’t yet know how many episodes there’ll be in season 3. However, season 1 was made up of seven episodes while season 2 consisted of 10. As such, we can expect the number to be somewhere in that range. What we do already know is that the first episodes are titled “Hittin’ The Trail” and “Fording the River”.

Who is in the cast of Miracle Workers season 3?

There are certainly some familiar faces in Miracle Workers season 3. The three main cast members are back, albeit playing new characters. This includes Daniel Radcliffe as Revered Ezekiel Brown, Steve Buscemi as Benny the Teen, and Geraldine Viswanathan as Prudence Aberdeen. They’re joined once again by Karan Soni as The Gunslinger and Jon Bass as Todd Aberdeen. Of course, there will be plenty of guest appearances as well.